The decisions a man makes in life don’t always yield black-and-white, good-or-bad results. Many simply turn out to be inconsequential.

Yet once in a while Chris Streveler will look at those crossroad moments in his football career, particularly those over the last two-three years, and marvel at just how many he absolutely, positively nailed.

Including his decision to sign with the Winnipeg Blue Bombers in the spring of 2018.

Streveler is no longer a member of the Bombers, as most well know, after parlaying his two solid years in the Canadian Football League into a contract with the Arizona Cardinals. And seldom does a day pass when the 25-year-old Crystal Lake, IL product doesn’t think about how influential his time in Bombers colours were.

“Signing with Winnipeg was the best move I ever could have made,” began Streveler in a conversation with bluebombers.com from his new address in Tempe, AZ. “That first season with Matt (Nichols) going down and me starting those first couple games as a fresh rookie… I did enough to continue to get every opportunity to play.

“Making that decision and pulling the trigger to come up to Winnipeg right away, just trusting my gut and my instincts, it really paid off. I wouldn’t be in this position now had it not been for making that decision.” 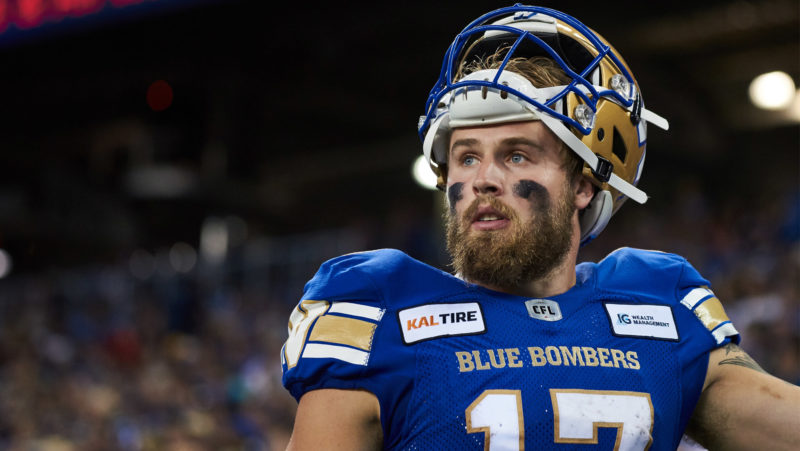 Chris Streveler was able to turn a standout 2019 with the Winnipeg Blue Bombers into an opportunity with the Arizona Cardinals. (BlueBombers.com)

“It’s funny to think back about all those little decisions that have led me to this point, even going back to Minnesota and wondering whether I should transfer (to South Dakota) or not. And then LaPo (former Bombers offensive coordinator Paul LaPolice) reached out to me after my senior season and I trusted the relationship we had built up over the phone and signed with Winnipeg. It’s worked out great. Things could definitely been a lot different if I had made a different decision here or there.”

Streveler is one of four Bombers from the 2019 Grey Cup championship team to land an NFL contract including Winston Rose (Cincinnati Bengals) who we visited with last week, Marcus Sayles (Minnesota Vikings) and Jonathan Kongbo (San Francisco 49ers).

There was a lot of NFL interest in Streveler after the Grey Cup, but an ankle injury had a few clubs step away because of the timing. Ultimately, he worked out for three teams – Arizona, Tampa and Miami – before settling on the Cards.

“When I left the Arizona workout I felt really, really good about what they would potentially have me doing,” he said. “Meeting with (Arizona head coach) Kliff Kingsbury and talking with him and knowing what they do offensively with Kyler (Murray, QB) and being a no huddle-type team I felt like it fit in with some of my strengths.

“I wanted to do my due diligence and work out with the other teams but, ultimately, Arizona felt like the best fit and I couldn’t be happier with how it worked out.”

There’s a Bomber connection with Kingsbury, of course. Kingsbury and Zac Taylor – the Bengals head coach – backed up Ryan Dinwiddie in the 2007 Grey Cup, now the Toronto Argonauts head coach, after an injury to Kevin Glenn in the East Final.

There’s also this: the Cardinals QB coach is Tom Clements – a member of the Winnipeg Football Club Hall of Fame and the starting pivot in the 1984 Grey Cup win.

“I remember after the workout with Arizona… I felt like I had done really, really well. I thought, ‘OK, if it doesn’t work out here it’s not going to happen,’” he said. “But he came up to me and said, ‘Look, I feel excited about the opportunity to work with you and get to develop you a little bit…’ Coming from somebody like that who has worked with some great guys and developed some good players it meant a lot. I felt the same way. I was excited to work with him and be a part of what they’re trying to build out here. That was great.

“The other thing is he’s got those ties to Winnipeg after being up there for a season. He was asking me about Earl’s… it was kinda funny to have him comment on that right from the jump.”

Streveler has been throwing regularly with Cardinal receivers Christian Kirk, Trent Sherfield and A.J. Richardson, as well as running back Chase Edmonds. He was also part of a group that went to Dallas after Kyler Murray hosted some sessions with the team’s offensive skill position players.

Now comes the difficult waiting period. Streveler is still scheduled to report with other rookies for camp on July 21st, although that could be impacted by COVID-19. In any case, he’s already lost some opportunities to shine with the cancellation of OTAs (organized team activities) that give newcomers and backups a lot of work.

Of course, Streveler isn’t the fresh-from-college rookie he was two years ago when he stepped in for an injured Nichols to open the 2018 season as the Bombers starter.

“I was talking to a guy today and he said about how tough it would be to be a rookie right now,” said Streveler “I told him those two years I had in the CFL and just being around professional football and learning how to carry myself is going to give me the best chance to succeed coming into this situation.”

Streveler has drawn many comparisons to New Orleans Saints QB Taysom Hill, who is used so effectively in their offence while also protecting Drew Brees in some short-yardage situations. Streveler certainly flashed similar skills during his two years in Winnipeg and in the Grey Cup he threw for a TD, caught a pass and also ran nine times for 30 yards.

When camp does open, Streveler would likely be listed fourth on the Cardinals’ depth chart behind Murry, Brett Hundley and Drew Anderson. He has sat in on some of the Cards special-teams virtual meetings, just to be up to speed on as much as he can. 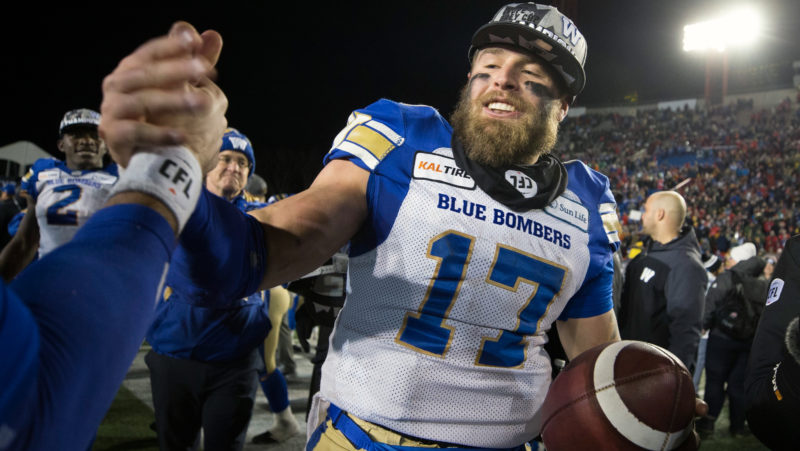 Streveler took home his first championship with the Bombers at the 107th Grey Cup presented by Shaw. (The Canadian Press)

“It’s the more you can do, right?” said Streveler. “That might help with the position I’m in here right now. I mean, I missed all the OTAs… now I go into camp and the starter’s going to be getting most of the reps. The reps are going to be very limited for back-up guys, so the more you can do, the more value you can show, that’s what it’s all about. It’s another opportunity for me to show value and show some of my skillset.

“It’s just about being on the roster as a backup and being on special teams to find ways to contribute. (Hill) has opened the door for that and more teams are talking about doing that. The Eagles talked about it with Jaylen Hurts and a bunch of other guys have been signed to potentially compete for a spot like that. It’s served to benefit me here and give me more of an opportunity. It’s just great to get the chance here.”

Streveler had hoped to be in Winnipeg for the home opener back in June. He would have received his Grey Cup ring then and seen the 2019 championship banner raised.

“Now I’m not sure when I’ll get back,” he said. “You know I’ll look back at last year and how much of a rollercoaster it was for me, from starting games when Matt got hurt, to getting hurt and then winning a championship. I appreciate now the personal growth I had.

“But I think about my teammates more. I miss hanging out with those guys, being in the locker room with them every day. There were some tough days and early mornings, sure, but when I look back on it that’s what I miss – hanging out with those dudes. I find myself thinking about that as much as any of the football memories.

“I miss those guys.”