Stock assessments are an inexact science on the most normal of years, in fact they aren’t really science at all. It’s more of a gut-feel based on snippets of information accrued through the draft process.

Nevertheless, scouts and general managers now have virtual combine data to pair with film and decide whether players they’ve had an eye on are trending up, down, or sideways.

You don’t have to be an impassioned observer of U SPORTS football to understand what the offensive line of the Calgary Dinos usually brings to the table. Hell, turn on the 2019 Vanier Cup and you’ll have a large enough sample size to understand they find big bodies and cultivate them into professional football players. This year it’s Tyler Packer and Peter Nicastro carrying the water for Calgary’s traditional display of depth finishing first and second, respectively, in 2021 combine score amongst a talented group.

At six-foot-one and 273 pounds, Wyatt Edmonds is undersized and is hurt by the lack of a bench press number in the 2021 virtual combine, but his short area quickness and speed off the ball fits a CFL guard perfectly, depending on how he’s able to pair it at the CFL level with power, balance and footwork.

Toronto’s offensive line did a fantastic job in 2019 of securing a consistent pocket for Clay Sequeira with Mojtaba as a mainstay. I had hoped to see more from the Variety Blues’ big man but a subpar showing in lower body explosion could make teams hesitant if it pairs with what they’ve assessed on film.

This might just be a clerical error, as can happen in the virtual age of information passing, but Swan is recorded as posting a five on the bench press in a group that put up 27 reps (Calgary – Nicastro) 22 reps (York – Chavaughn) and 32 reps (Calgary – Comeau). 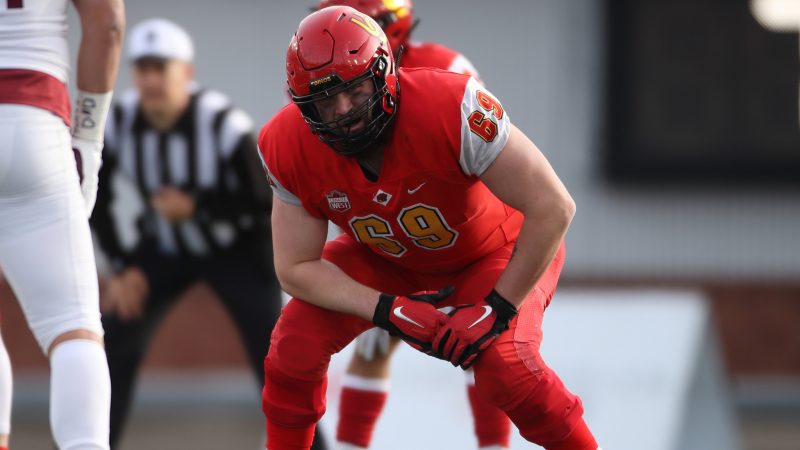 He’s not quite Windsor Lancers alum and Bombers Grey Cup champion Drew Desjarlais, but he’s as close as the 2021 offensive line draft class will get to a sure thing. I really hope Bandy gets to play some tackle at the CFL level but he’ll excel at guard if placed inside.

The AUS’ best offensive lineman has widely been considered Saint Mary’s Peter Kourtis, but that might change coming out of the 2021 virtual combine after Acadia’s Alex Smith showed elite lower body explosion and quickness at just over six-foot-two and 278 pounds.

They love their tall offensive lineman in Sherbrooke and Samuel Ducharme is no exception. At six-foot-five and a bit, he is outstretched by only Carter Comeau and Tyler Packer of the Calgary Dinos. It would have been great to get a sense for his length, but without that I wonder if he’ll have some of the same leverage issues that challenged Montreal Carabins former OL Arnaud Gendron-Dumouchel.

The Golden Bears have produced some great prospects over the past five years with names like Korte and O’Donnell, Nelson appears to be next in line albeit on the other side of the line. At nearly six-foot-six and 312 pounds, matched with 25 reps on the bench and a sub 5.00 40-yard dash, the athleticism is there to match his playmaking.

Perhaps this one is on me, but I was hoping for a bit more from Theriault to offset his smaller frame. At six-foot and 239 pounds, he’s not the size of many CFL linebackers but didn’t run well with defensive line metrics. His best chance moving forward is likely as a backup weak side linebacker who earns his way onboard as a special teamer.

Similar to Dinos teammate Logan Bandy, Nellis is a solid all around athlete with a great frame and base to develop from. He’ll get drafted, make some plays and be added to the long line of Calgary products who fit exactly what the CFL Draft has long been about.

Defensive line draft picks tend to benefit from being slightly undersized with solid movement skills. Junior Turner from Bishop’s and Connor McGough from Calgary are two that quickly come to mind. Green fits that bill, but how influential can he be on special teams to earn an opportunity on plays from scrimmage the way those previously mentioned did?

A Guelph Gryphons transfer, Cimankinda never got the chance to line up with the Ravens thanks to COVID. In 2019 with Guelph he was an OUA all-star with a whopping 16.5 sacks and 21 tackles for loss. With so much time since playing, what will his draft stock be on May 4th?