It truly is hard to believe this is the last Monday Morning Quarterback of 2020. It has been a fever dream of a calendar year that included a postponed season and no Grey Cup winner for the first time since 1919. And yet, here we are just over two months away from the start of 2021 free agency and training camps are in striking distance. The road ahead still has bumps and potholes, but the light at the end of the tunnel really is approaching.

It was an absolute gut punch when the league formally cancelled the season in mid-August. It directly affected the lives of thousands of people across the country and was hugely disappointing for fans coast to coast. But the league made a quick pivot to throwing all their resources into 2021 and all that behind the scenes work is starting to bear fruit.

The first tangible evidence of that approaching bright light is what we’re seeing in pre-free agency right now (more on that later). Big names are re-signing with their 2020 teams as momentum builds for a return to play. Additionally, and significantly, players are coming back from south of the border, too. The return of stars like William Stanback and Bralon Addison can’t be understated.

The league also addressed the fate of the 2021 CFL Draft during this pause, and the resulting tweaks could end up giving us the most interesting event we’ve ever seen. A random, equally weighted draw for draft order gave the Tiger-Cats the number one overall pick in the first ever snake draft, where the order won’t reset after each round. It should make for all kinds of intrigue and unpredictability.

I’m encouraged by the possibilities of what the 2021 season could look like, too. By the time we get to training camp, the NFL will have gone through an entire season with travel and, in some cases, limited fans in attendance. All kinds of lessons can and will be learned and it should give the CFL a solid base of knowledge to kick things off successfully in June.

Perhaps the first games of the coming season will be played in empty buildings. The fact that is no guarantee, though, is a huge positive. Vaccinations are rolling out across the country as we speak, and it’s not at all crazy to think we could be in a very different place six months from now. As such, limited fans to start and perhaps a return to full buildings later on isn’t far fetched by any means.

Which leads us to the 108th Grey Cup, taking place November 21st in Hamilton. That’s 11 months from now, when all projections suggest things will be back to that “normal” we vaguely remember from the beginning of 2020. We didn’t get a Grey Cup this year, but if things progress the way we hope, can you imagine a bigger party than what we’ll see in The Hammer?

It was a tough and weird Christmas for so many. But, if you’re a fan waiting for the return of football in this country, let me attempt to cheer you up. Free agency is in February and looks to be awesome. A couple months later we’ll get the draft. You’ll blink your eyes and we’ll be into training camp and weeks away from real, actual CFL football. The season will fly by and then maybe, hopefully, we’ll be partying at a Grey Cup like it’s 2019.

It’s tough to put a positive spin on what we’ve all endured since March. But as we wrap up 2020, us CFL fans and, well, us Canadians, can feel pretty darn good about what’s coming in the New Year. Speaking only for myself…I’ll take that every day of the week.

I’m loving the rapid stream of news we’ve seen over the last few weeks. Teams are keeping key players in the fold and each passing day the free agency picture becomes a little clearer. Let’s whip through the biggest moves from the last few days, with much more to come as we move closer to February.

I’m thrilled to see the aforementioned Bralon Addison return to the Ticats, because I think this guy is just getting started. Addison returned to the CFL last week after signing with the Minnesota Vikings just under a year ago. Now Addison can pick up where he left off in black and yellow. Remember, this guy burst onto the scene out of nowhere late in 2018 and only has one full season under his belt. That one full season, however, saw Addison rack up 1,236 receiving yards and seven touchdowns. 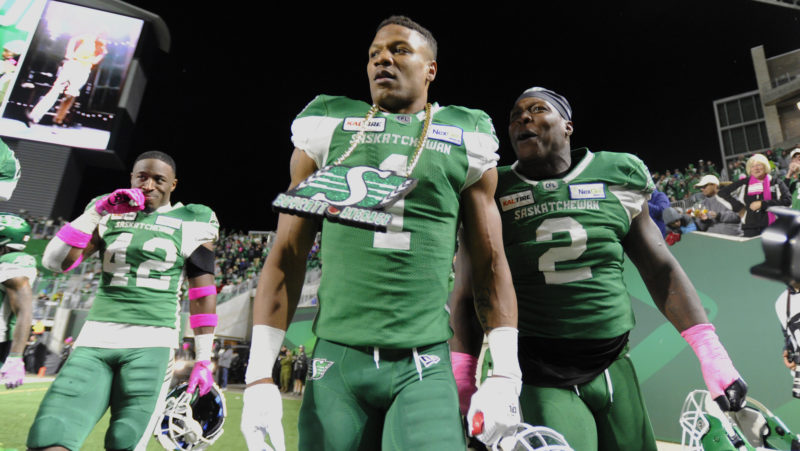 Shaq Evans also has a chance to keep on rolling after signing an extension with the Roughriders last week. He and Cody Fajardo formed one of the league’s best quarterback-receiver duos in 2019 on a Saskatchewan team that came SO close to playing for the Grey Cup. Evans has established himself as one of the CFL’s best, and most well-rounded, receivers, which is why extending him was a priority for the Riders.

In Edmonton, Trevor Harris has joined a growing list of quarterbacks restructuring their deals in an attempt to help their team. According to general manager Brock Sunderland, it was Harris’s idea, which shows how committed he is to what this team is building. Harris’ first season in Edmonton would have had him in the Most Outstanding Player conversation had he not dealt with injuries in the second half of the season. If I’m a fan in Edmonton, I can’t wait to see what year two has in store.

Finally, don’t sleep on Josh Huff who returned to Calgary after opting out of his contract in late August. Huff really started to establish himself as a favorite target of quarterback Bo Levi Mitchell late in 2019, and racked up five or more targets in six of his last eight games. With the departure of Reggie Begelton and a fully healthy Mitchell at the helm, Huff enters 2021 with the chance for a breakout season.