Every off-season I like to scribble down a few new ideas. I especially like to come up with topics that are fun to revisit at the end of every season. One of those for me was looking at the league’s best quarterback and receiver tandems, which is something that could be fun to compare year over year going forward.

As we all know, it has been a very strange number of months, so I thought it would be a good time to take a shot at this one. So, if we can remember back to the 2019 season and beyond, let’s take a look at the CFL’s best passing tandems in no particular order.

We haven’t seen these two on a field together for quite a while because of Masoli’s season-ending knee injury sustained in Week 7 of last year. But ever since this pair got their big opportunities at exactly the same time, the chemistry between Masoli and Banks has been undeniable.

RELATED
» O’Leary: Hufnagel’s coaching tree reaches across the league
» Watch the entire season 5 of Best in the League
» Landry: Masoli taps into the fountain of youth in knee rehab 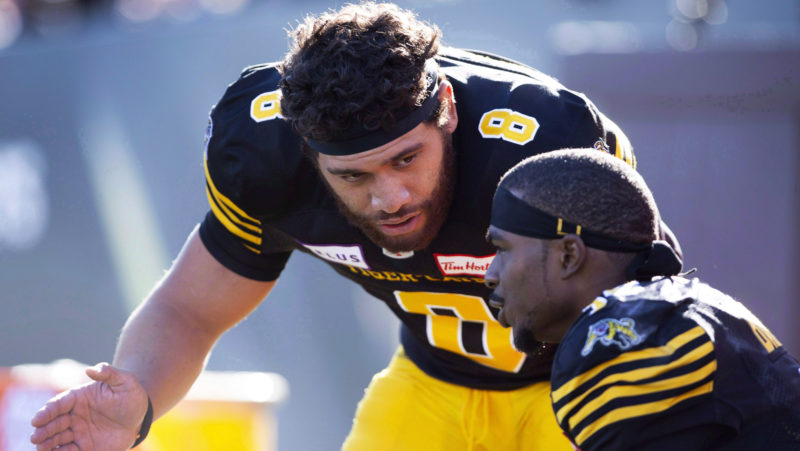 What I like about this tandem is how they burst onto the scene simultaneously. When June Jones took over as Hamilton’s head coach midway through the 2017 season, he made two massive changes on offence. He installed Masoli as the team’s starting quarterback, which was huge. But just as important was how Jones changed the team’s philosophy on using Banks.

For me, Banks is the most dynamic, dangerous, and explosive player in the CFL. But for whatever reason, prior head coach Kent Austin wasn’t keen using him as a regular on offence. Jones changed that, and did so in a big way. Banks went from being primarily a return specialist to a focal point of the Tiger-Cats’ offence, and the results have been devastating.

Masoli was installed as Hamilton’s starter in Week 11 of the 2017 season, and from that point on, he and Banks have been hard to contain. Banks averaged 95 yards per game in the final ten games of that season as the Ticats narrowly missed the playoffs after an 0-8 start. The following season saw Masoli nominated as the East Division’s Most Outstanding Player while Banks bumped his average up over 100 yards per game.

Banks and Masoli were rolling again through seven weeks in 2019 before the latter went down with the knee injury he’s still working his way back from. Dane Evans will have something to say about it, but if Masoli and Banks are back on the field together in 2021, I’m expecting more fireworks.

I don’t say this lightly, but I believe it: if not for injuries and a few years south of the border for Rogers, this tandem could very well be the best the league has ever seen. Mitchell is already Hall of Fame bound and the receiver he’s had the most natural chemistry with since taking over as Calgary’s starter is Rogers.

Mitchell became the guy for the Stampeders to start the 2014 season before Rogers had even stepped foot in Alberta. Rogers didn’t join the team until July of that year and didn’t get into game action until Week 18. But Mitchell immediately knew he had a special target. 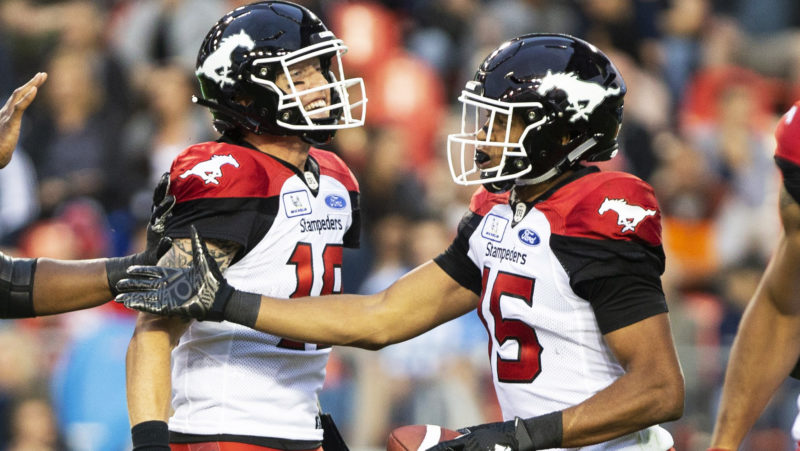 Mitchell and Rogers celebrate a touchdown against the Argonauts in 2018 (Peter Power/CFL.ca)

Rogers and Mitchell got just four games together that year, including two in the playoffs…and that was enough. They connected for four touchdowns during that short stretch, including two in Calgary’s Western Final win over Edmonton. A week later in the Grey Cup, Rogers led all receivers with 108 yards as the Stamps triumphed 20-16 over Hamilton.

The following season was the first full one for Mitchell and Rogers and they were borderline unstoppable. Rogers led the league with 1,448 receiving yards and ten touchdowns, which paved the way for an opportunity in the NFL.

Since returning to Calgary in 2018, Rogers has been Mitchell’s favorite target, specifically when the former has been healthy. But even battling nagging injuries in 2019, Rogers caught ten touchdown passes and went over 1,000 yards for the second time in his career. With both Mitchell and Rogers getting full years to get their bodies right, I can’t wait to see what these two have in store for 2021.

We’ve only seen one year of these two on the same team, but if 2019 was any indication, Reilly has already found his favorite target. Knowing how prolific Reilly is passing the football, that can mean only good things for Burnham, one of the league’s most consistent receivers over the last five years.

While the Lions struggled in 2019, one thing that didn’t suffer was the instant chemistry between these two. Burnham has been one of the CFL’s most reliable and consistent possession receivers since becoming a full-time starter in 2015. One thing he didn’t have was an elite quarterback throwing him the ball. Until last year, that is.

Reilly and Burnham instantly hit it off in 2019. In BC’s Week 1 loss to Winnipeg, Reilly targeted Burnham 12 times, ultimately connecting five times for 153 yards. Two weeks later it was 13 targets, ten catches, and 94 yards. Overall, Burnham went over 100 yards six times in 2019, all with Reilly passing him the ball en route to a career season.

Knowing how much Reilly trusted his new teammate in 2019, I think this tandem is only going to get better next season. Reilly will be 36 for 2021 and finished last season early thanks to a wrist injury, which means a full year off will only do him good. A fully healthy and rested Reilly with Burnham is going to be scary in 2021.

This is another newer connection that also only started to blossom last season. But as Adams started to come into his own as Montreal’s starting quarterback, the guy he eventually locked in most on was Lewis. I don’t think there was any coincidence these two both had their breakout seasons the same year. 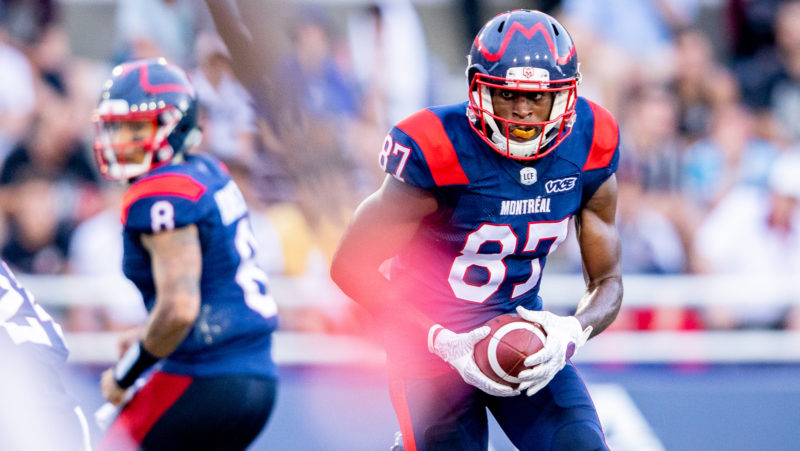 Lewis had his best season to date in 2019 (MontrealAlouettes.com)

It took a few weeks for this tandem to get established as the Alouettes had a solid group of receivers. But from early August on, those targets started steadily rising for Lewis. He had nine in Week 8, 16 in Week 10, 12 in week 14, and so on and so on. In Montreal’s final 14 games, Adams threw Lewis’s way an average of around eight times per game.

I like the way this pairing is heading, too. After initially opting to try his hand in the NFL, Adams decided to stay with the Alouettes and he’ll be the Week 1 starter in 2021. Similarly, Lewis re-upped with Montreal prior to free agency, which means this tandem will be ready to rock right off the hop.

Of all the tandems we’ve looked at, this is the only one that can boast productivity on two different teams. Harris and Ellingson started their impressive connection as members of the Ottawa REDBLACKS. Ellingson signed there in 2015, while Harris was reeled in as a free agent one season later.

Their first year with Ottawa was solid, although Harris and Henry Burris went back and forth as the team’s starter. Harris took the reins full-time the following season and it turned into a career season for both him and Ellingson. 2017 saw Ellingson finish with a career-high 1,459 receiving yards and a league leading 12 touchdowns.

Harris and Ellingson were good again in 2018, but with the REDBLACKS boasting so many receiving options, the latter’s numbers went down a little. Fast-forward to last season in new colours, though, and this tandem picked up where they left off in Ottawa.

Harris and Ellingson signed with Edmonton as free agents in 2019, and their carryover chemistry was immediately easy to see. In their first three games, Harris and Ellingson connected 21 times for 313 yards and two touchdowns. Like many big name quarterbacks in 2019, though, Harris ran into injury issues later on, which is why a full year of rest will likely help him immensely.

Ellingson and Harris are as consistent as they come individually. Together, they seem as sure a bet as any to be back on point in 2021.