Starting when the moratorium on re-signing pending free agents was lifted exactly two weeks ago, we’ve seen a steady stream of CFL news. Andres Salgado kicked it all off when he re-upped with the Calgary Stampeders and the news has kept coming ever since. Part of that flow of news has included high profile stars staying put before free agency opens in February. 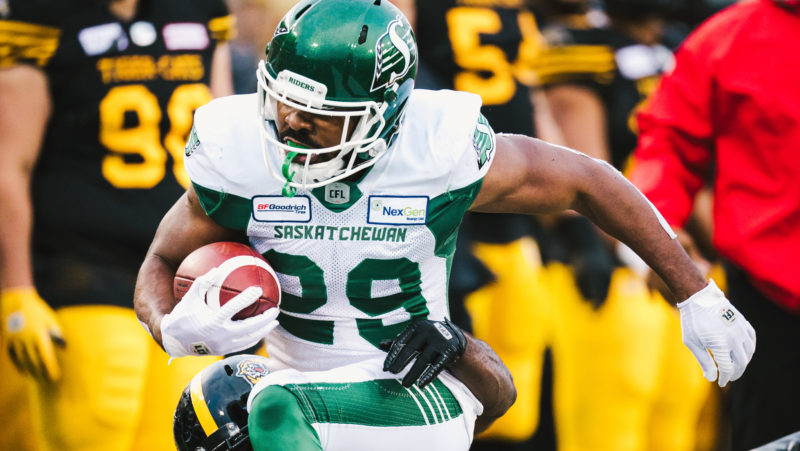 William Powell ran for his third consecutive 1,000-plus-yard season in 2019 and will bring some balance to the Riders’ offensive game plan in 2021 (Johany Jutras/CFL.ca)

Powell put together a really solid first season with the Riders in 2019, so coming back for another year made perfect sense for both sides. Powell’s consistency was exactly what Saskatchewan needed to balance out an already dangerous offence. Cody Fajardo was an explosive dual threat, while Shaq Evans and Kyran Moore provided a pair dynamic receiving targets. Having Powell as a steadying force on the ground rounded things out nicely.

Powell ran for 1,093 yards in 2019, good for his third straight 1,000-plus season and second overall in the league. Powell’s 12 rushing touchdowns doubled his previous career high and put him in elite company. Powell finished tied with Chris Streveler and Vernon Adams Jr. for first overall, and most impressively, had five more touchdowns than any other CFL tailback. Bringing him back was a key step in building on a great 2019 campaign. 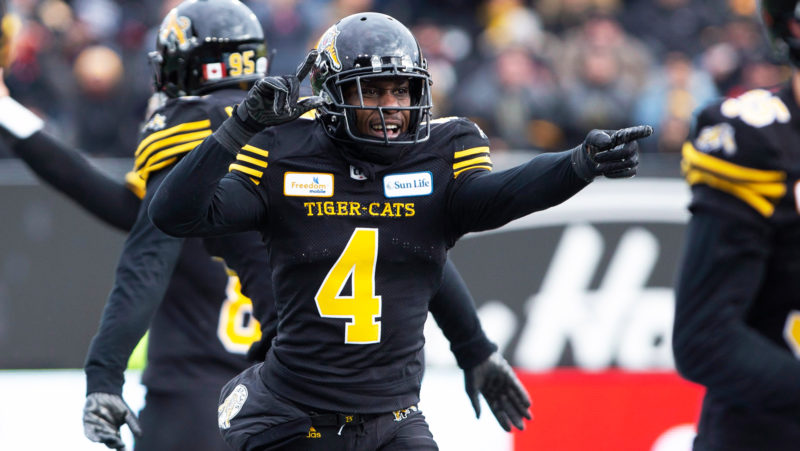 He hasn’t worn a Stamps jersey yet, but Calgary knows what Richard Leonard can bring to its defence in 2021 (Photo: The Canadian Press)

Without even playing a game with his new team, Leonard re-signing in Calgary registers as a huge move. The Stamps have rarely made big free agent splashes under general manager John Hufnagel, but they made an exception for Leonard 10 months ago. With mainstay Brandon Smith’s retirement and the departures of Tre Roberson and DaShaun Amos, Calgary had a need to fill in the defensive backfield. They addressed it with one of the best in the business.

In three years with Hamilton, Leonard established himself as one of the league’s best field halfbacks en route to two East Division All-Star nods. Nik Kowalski at Last Word on Sports had opposing quarterbacks completing just 51 per cent of their passes on 82 targets against Leonard in 2019. Those are elite numbers and they look even better when you factor in his four interceptions. The Stamps have the option to plug him in at field half, boundary half, or boundary corner, depending on how they want to go. Bringing him back after a cancelled 2020 season was huge. 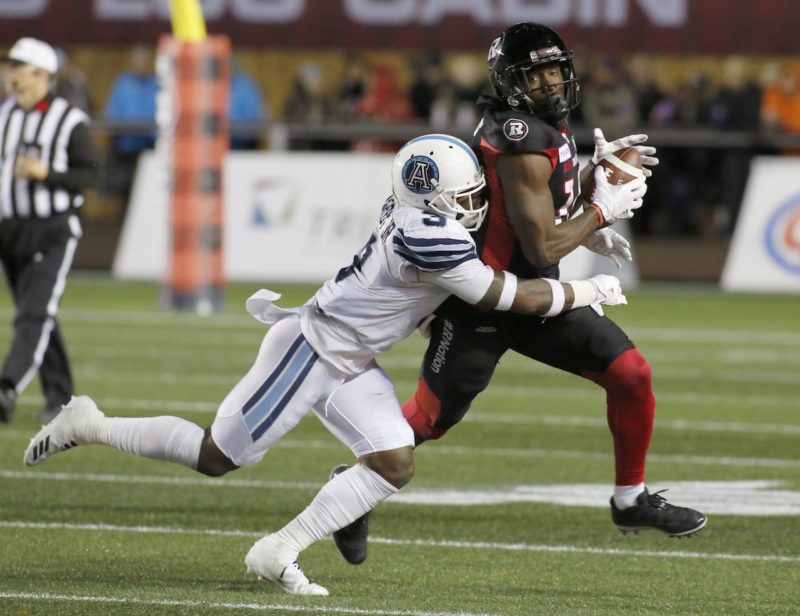 He’s already had a 1,000-yard season, but paired with Mike Reilly in BC, Dominique Rhymes could be on the verge of a springboard season (CFL PHOTO – Patrick Doyle)

I had Rhymes as one of the most interesting free agent signings from 2020. Well, now that he has opted to sign back with the Lions, we’ll finally get to see what Rhymes is capable of in a potentially explosive offence. Rhymes had a breakout 2019, finishing with 65 catches, 1,056 yards, and five touchdowns…and that was all without reliable play at quarterback.

With Mike Reilly’s situation cleared up in BC, Rhymes is going to have a chance to take another step. Remember, Reilly and the Lions offence was finally starting to click prior to his season ending injury in 2019. With a quarterback able to truly stretch the field, Rhymes has the chance to serve as the primary big play threat in an offence that should also boast Bryan Burnham, Shaq Johnson, and Caleb Holley. 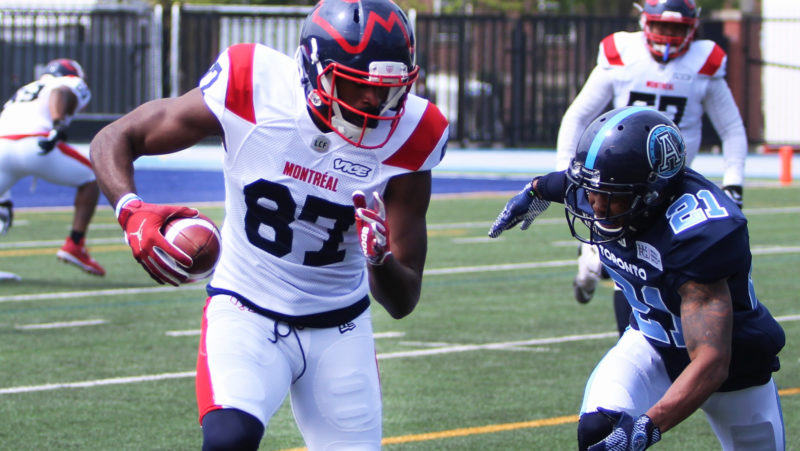 After finding a rhythm with QB Vernon Adams Jr. in 2019, Eugene Lewis is poised to take it to another level in the coming season (Shannon Vizniowski/CFL.ca)

Vernon Adams Jr. had plenty of targets as the Alouettes returned to prominence in 2019, including Quan Bray, DeVier Posey, and Jake Wieneke. But it was Lewis who emerged as the go-to guy for Adams as the season progressed. By the second half of the season, Lewis had established himself as one of the most consistent and dangerous receiving threats each and every week.

Lewis finished his third season in Montreal with 1,133 yards (seventh overall) and five touchdowns. But after a feeling out process with Adams, Lewis exploded from Week 10 on. In his final 11 games of the season, Lewis averaged around five receptions, eight targets and 80 yards per game. With Adams restructuring his deal and committing to the Als long term, bringing back his favorite target seemed like a no-brainer.

Finishing what they started

Speaking of Adams, he and the aforementioned Reilly did some restructuring of their deals to ensure long-term futures with their teams. In both cases, it’s a chance for a quarterback to complete some unfinished business from 2019. If I’m a fan of either the Alouettes or Lions, I’d be feeling pretty good about what’s to come over the next few years.

It’s two different takes on the same theme. Adams burst onto the scene somewhat out of nowhere after not even being Montreal’s Week 1 starter last season. Once he had the ball, though, no one was taking it from him. Adams finished with 36 total touchdowns and was in the Most Outstanding Player conversation all year long.

But things didn’t go as well in Montreal’s first playoff game in five years. Adams threw three interceptions and struggled throwing the ball as the Alouettes fell 37-29 to Edmonton in the East Division Semi-Final. Adams entered last season with next to no expectations but 2019 ended with a really empty feeling.

Reilly’s situation with the Lions was somewhat the opposite. After signing an historic deal prior to the 2019 campaign, Reilly entered his return season with BC with massive expectations. Not only did Reilly and the Lions fall short of those expectations to start, it turned into an unmitigated disaster. The Lions lost 10 of their first 11 games and Reilly looked like a shadow of the guy who had busted off three straight seasons of 5,500 or more passing yards.

But then something changed. Coming off a week 12 bye, Reilly led the Lions to wins in four of five games and put them right back in the playoff conversation. Prior to sustaining a wrist injury in Week 18, Reilly had rattled off five straight strong games. In that stretch, Reilly averaged just under 300 passing yards and threw 11 touchdown passes. Things were finally starting to round into form, which has to be driving Reilly heading into 2021.

Both Reilly and Adams started something promising. With agreements in place with the Lions and Alouettes, respectively, I can’t wait to see how they finish their business.