Alberta’s two CFL teams signed a pair of receivers last week that have me very interested going into the season. The Calgary Stampeders avoided free agency with Kamar Jorden while Derel Walker rejoined the Edmonton Football Team after spending a season in Toronto. Both players have the potential to make massive impacts in 2021.

Walker’s story is fascinating, mainly because he’s been a high profile free agent for almost a year. Remember, Walker became a free agent in February 2020 after not re-signing with the Argos and remained unsigned as the season went into limbo a couple months later. Fast forward to January 2021 and Walker is back in a familiar spot. 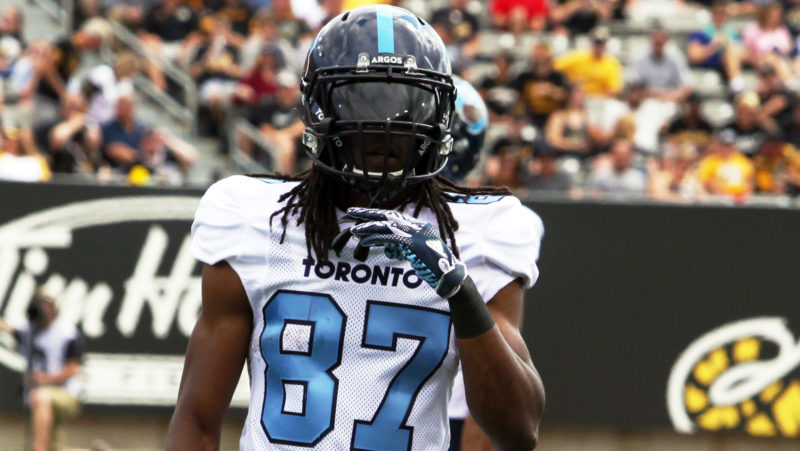 Walker spent one season in Toronto before becoming a free agent in 2020 (Shannon Vizniowski/CFL.ca)

Walker’s decision to return to Edmonton could end up being one of the most impactful additions of this off-season. If all goes according to plan, this will be just his third full CFL season. If history is any indication, Walker is in for a huge season.

Walker’s first full campaign was 2016 after being activated off Edmonton’s practice roster partway through the prior year. Walker appeared in 18 games in 2016, finishing with 1,589 receiving yards and a league-leading ten touchdowns. Along with Adarius Bowman and Mike Reilly, Walker was part of one of the league’s most potent passing attacks of the last couple decades.

Walker’s only other full season was 2019, when he went over 1,000 yards again and finished with six receiving touchdowns. All of that came despite inconsistent quarterback play in Toronto and bizarre early season usage that saw him barely targeted until Week 5. Just imagine what he would have done in a different situation.

A situation like the one he’s walking into. With a newly restructured contract in hand, quarterback Trevor Harris looks poised for a huge second year in green and gold. Let’s not forget he was in the Most Outstanding Player conversation prior to getting hurt. Harris is one of the CFL’s most prolific and consistent passers and pairing him with Walker has dangerous written all over it.

Then there’s Jorden, who has played just once since September 2018 when he went down with a torn ACL. Even then, it is pretty clear Jorden wasn’t 100% ready for his return to action in Calgary’s Western Semi-Final loss to Winnipeg 14 months ago. And let me be clear: he was ready in full physically, but wasn’t back up to game speed for a return of his standards.

Prior to the devastating injury, though, Jorden was starting to put himself in the conversation as the league’s best receiver. Jorden had touchdowns in three straight games prior to getting hurt and was averaging 167 yards per game over that same span. Overall, Jorden’s 2018 receiving average was over 94 yards per game. The timing of his injury was just brutal.

But when he steps back onto the field for Calgary’s first preseason game in May, Jorden will be as motivated as any player anywhere. It’ll be his first game truly at 100% in more than two-and-a-half years. Jorden will be catching balls from a fully healthy quarterback in Bo Levi Mitchell. Yep, I can’t wait to see what 2021 has in store.

In last week’s column, we identified Winnipeg’s “power trio” of Stanley Bryant, Andrew Harris, and Justin Medlock as part of their New Year’s resolution. Well, you can scratch one name off that list, as Bryant has opted to return to the defending Grey Cup champions.

Bryant re-upping with the Blue Bombers is no surprise. If the two-time Most Outstanding Offensive Lineman was going to sign anywhere, it was with Winnipeg. My only question was whether the 35-year-old perennial All-Star was going to return at all after a year away from football. He has now answered that question.

“No doubt this is where I wanted to be,” Bryant said on a conference call last week. “My body feels great. My mind is also great. I’m still going to go out there and compete at a high level and continue to do what I’ve been doing the past few years and that’s go out there and help this team win ball games.”

Bryant’s return instantly boosts Winnipeg’s stock for repeating as champs. This guy is the gold standard of the last decade and it got me thinking about where Bryant sits in the CFL’s big picture. When you take a few minutes to reflect on his ten years in this league, it’s not a stretch to think he could be considered the best to ever suit up at his position.

I ran that idea by a few of my league contacts and got a lot of virtual nods of approval. Bryant is a five-time All-Star and a two-time Most Outstanding Lineman. In reality, both of those totals could/should be higher, but voting is never a perfect science. He’s a Grey Cup winner with two teams. And the lines he anchors always end up near the top in both sacks against and rushing yards, whether with the Stamps or the Bombers.

Ranking offensive lineman is not the easiest task, especially era to era. But one fact is impossible to argue: Bryant is one of the greatest to ever play. Winnipeg is rightfully pretty thrilled he opted to return for an 11th season.

One guy that will be really interesting to keep an eye on, however, is a quarterback who hasn’t even thrown a pass with his new team. Nick Arbuckle was one of the big prizes heading into the cancelled 2020 season, and part of went along with that was signing a big contract with the Ottawa REBLACKS.

What makes this so interesting is the fact Arbuckle has yet to take a snap as Ottawa’s starter. The REDBLACKS gave up a third round pick to bring Arbuckle in via trade from Calgary. They then swapped first round picks with the Stampeders when Arbuckle opted to sign.

With the understandable trend of quarterbacks restructuring deals in uncertain economic times, Arbuckle’s situation is fascinating because both sides of leverage. The REDBLACKS can say he has only started seven games in the league and has yet to prove himself. Arbuckle can counter by saying he’s their focal point for years to come.

I’m sure it’ll all get figured out, if there’s even anything to sort through. It was just something that popped out to me as this off-season rolls on.