With a target date to start this season just over two months away, let’s get back to our 2019 refresher crash course by focusing on the CFL’s last rookie class.

While rookie standouts like Calgary’s Nate Holley (Miami) and Saskatchewan’s Dakoda Shepley (San Francisco) have caught on in the NFL, we’ve got a number of soon-to-be sophomore’s primed for stellar follow-up seasons.

RELATED
» O’Leary: Some would-be training camp thoughts
» Risk and Reward: 8 ‘futures’ that eventually made it to Canada
» Landry: Anti-rouge? Maybe you missed the point

Diggs was neck-and-neck with Holley all season long for the league’s best rookie linebacker in 2019. Holley went on to get the West Division nod and was named Most Outstanding Rookie. With the debut campaign Diggs had, though, it could easily have been him coming out of the West. And, at just 25, Diggs looks ready to explode in 2021.

As Edmonton’s starter at Will linebacker from week one, Diggs racked up 73 defensive tackles, two sacks, one interception, one forced fumble, and two fumble recoveries. When you factor in his 11 tackles on special teams, Diggs finished eighth overall with 84 total tackles in 2019. This guy is fast, strong, and ready for an even bigger role in Edmonton’s defence this eyar.

En route to being named East Division Most Outstanding Rookie, Weineke’s 2019 saw him finish with 569 receiving yards and an impressive eight touchdowns, good for fifth overall. With the whole Montreal offensive band coming back for this year, I’m really excited to see what Wieneke has in store.

Alouettes’ quarterback Vernon Adams Jr. will have an impressive arsenal in 2021 that includes BJ Cunningham, Eugene Lewis, and newcomer Naaman Roosevelt. But, knowing how reliable and sure-handed Wieneke proved to be last season, it’s a fair bet to think he’ll be a huge part of the offence right from Week 1. Wieneke was a sneaky CFL Fantasy bargain for most of 2019. I don’t expect that to be the case this year. 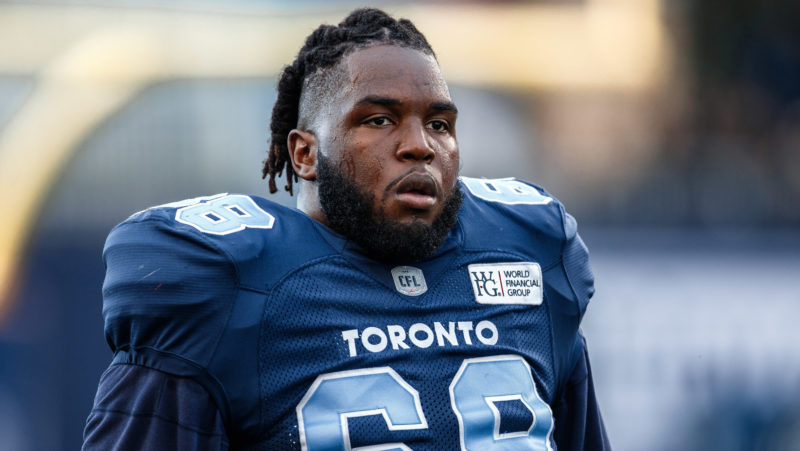 Shane Richards was the first overall pick in the 2019 CFL Draft (Argonauts.ca)

The first overall pick at the 2019 CFL Draft didn’t get to fully realize his rookie season due to injury, but that doesn’t mean Richards isn’t in store for a great sophomore season. Richards was a Week 1 starter for the Argos last season before sustaining a groin injury that sidelined him for the next ten games.

Positively, Richards played in Toronto’s final seven games of the season and enters 2021 with high expectations. The Argos have a deep group at offensive line, which is good news for both the team and Richards. The additions of Dariusz Bladek and Philip Blake in the interior should allow Toronto to gradually work Richards into the mix. Don’t be surprised if he’s a regular starter in the second half of the season, though.

On a team that boasts Brandon Banks and Bralon Addison, it would be easy to get lost in the shuffle in Hamilton. Acklin’s rookie campaign didn’t allow that to happen, however, as he popped onto the scene early with 120 yards and a touchdown in a Week 3 win over Montreal. Acklin finished 2019 with 58 catches, 708 yards, and three touchdowns and shouldn’t have any issue building on that this year.

The Tiger-Cats are hoping continuity is key this season, with receivers Banks, Addison, and Marcus Tucker all coming back along with quarterbacks Dane Evans and Jeremiah Masoli. That means Acklin is virtually locked in as Hamilton’s ‘W’ receiver for 2021, giving them an option to stretch the field as a dangerous third option.

Rookie seasons don’t get much better than what we saw for Desjarlais. After going fourth overall at the 2019 CFL Draft, Desjarlais dressed immediately for the Bombers, took over as starting left guard midway through the season, and converted that into a start in the 107th Grey Cup. That’s a pretty good beginning to a career.

The way things are shaping up in Winnipeg, Desjarlais is in a good spot to pick right up where he left off. With Cody Speller moving on to Toronto, Desjarlais seems to be locked in beside Stanley Bryant on the left side of an offensive line that only allowed 35 sacks in 2019.

In his rookie season, Mayala hauled in 562 yards and five touchdowns (The Canadian Press)

Knowing how deep Calgary’s receiver group was last season, it’s understandable it took a little time for Mayala to find his way. Once he did, though, he displayed every bit of potential the Stampeders saw when they drafted him eighth overall at the 2019 CFL Draft. Mayala’s final five games were outstanding and there’s no reason that shouldn’t carry over to start this year.

In those final five regular season outings, Mayala averaged more than 80 yards receiving and racked up five touchdowns. With 2019 standouts Reggie Begelton in Green Bay and Eric Rogers in Toronto, Mayala enters this season as one of quarterback Bo Levi Mitchell’s top targets. Don’t be surprised if we see an absolutely monster sophomore season.