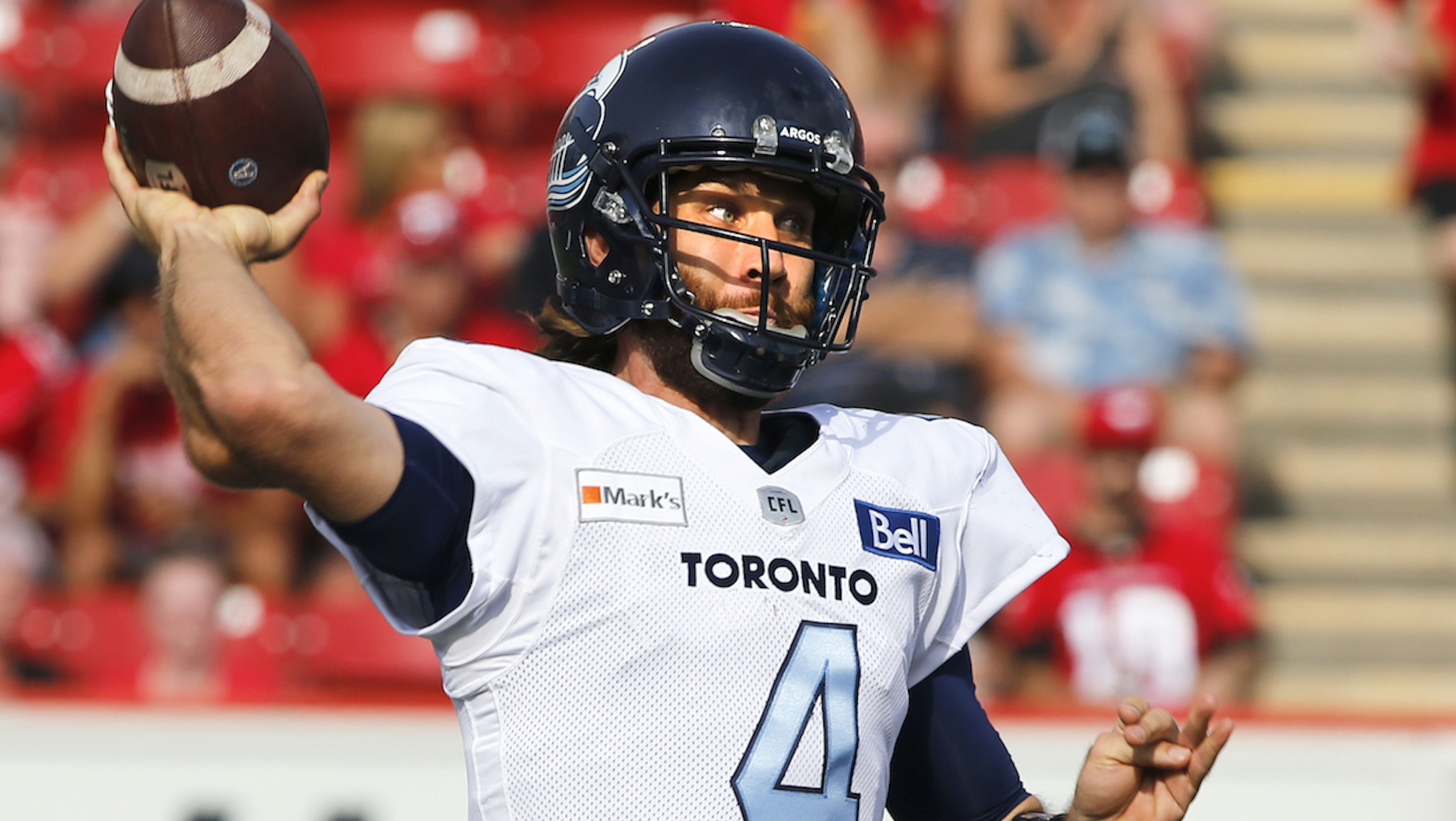 It flew under the radar when Toronto re-signed him during the off-season, but McLeod Bethel-Thompson is one of the easiest guys to cheer for in this league. He was also one of Week 1’s most important players. Bethel-Thompson’s story is awesome and his path to the CFL is as winding and unique as they come. What gets lost sometimes, though, is the fact Bethel-Thompson plays really good, fun, and exciting football.

Bethel-Thompson was nails as the Argos scored 11 unanswered points to knock off the Stampeders 23-20 on Saturday night. After a turnover gave Toronto great field position in the fourth quarter, Bethel-Thompson hit Kurleigh Gittens Jr. for a touchdown strike to trim the gap to two. That was followed by an outstanding pass-and-catch hookup with Eric Rogers to tie the game at 20 on the ensuing convert. But Bethel-Thompson wasn’t done there.

RELATED
» Bethel-Thompson: ‘We found out we have heart today’
» REDBLACKS, Kanneh dig in for gritty opening win
» Cody Fajardo: ‘That was a big character game for us’

After Toronto forced a punt on Calgary’s next possession, Bethel-Thompson took over at his own 21 with just over four minutes remaining. Over the next 3:20, Bethel-Thompson was precise and measured as he led the Argonauts on a ten-play drive setting up Boris Bede’s game winning field goal. Not bad for a guy who wasn’t expected to start the season on top of the depth chart.

That’s just one of many observations from an awesome, exciting, unpredictable, and long-awaited opening week of action.

The Argonauts added so many former Stampeders over the last two off-seasons, you knew that was going to be a storyline as those two teams went head-to-head in Week 1. Well, it ended up working out well for Toronto. Charleston Hughes had a huge forced fumble and recovery to starts his team’s fourth quarter comeback. Juwan Brescacin had a first quarter touchdown, while Rogers reeled in that huge two-point conversion in the fourth.

And don’t forget Ryan Dinwiddie, as he earned his first head coaching victory against the team that gave him his start on the sidelines. With no head coaching experience prior to Saturday night, hiring Dinwiddie was a fascinating decision by the Argos and general manager Pinball Clemons. It was cool to see him so fired up on the sidelines after Shaq Richardson’s interception sealed Toronto’s win, because that had to feel good.

How about that 1-3 start for my CFL.ca picks! I had Hamilton, Calgary, and Edmonton all winning in their season openers and only hit on Saskatchewan’s win over BC. I love it. With no football for so long, no pre-season, and so many new faces on different teams, the 2021 season shapes up to be one of the most unpredictable and wide open ones we’ve ever seen.

Ottawa and Toronto combined for seven wins in 2019 and both went on the road and knocked off solid West Division opponents. The last three games of the week were all one-score finals with a combined winning margin of 11 points. All three of those games came right down to the final few plays. The next 13 weeks should be awesome.

I’d say Abdul Kanneh’s return to Ottawa was an impressive one. After a season with Hamilton and two more in Toronto, Kanneh returned to where his CFL career started for the 2021 season. His first game back was a memorable one as Kanneh closed out the week with a pair of interceptions. That included a 102-yard return for a touchdown in the fourth quarter that turned out to be the winning score in a 16-12 REDBLACKS win in Edmonton.

You can add that end zone dash to Kanneh’s list of memorable moments in Ottawa. If his game-saving shoelace tackle on Calgary’s Andrew Buckley is Kanneh’s number one highlight wearing REDBLACKS colours, his Saturday night touchdown at Commonwealth would have to be right there for number two.

He’s Still Got It

Despite his team’s loss to Toronto, it was great to see Kamar Jorden back on the field. More importantly, it was awesome to see the Calgary receiver back in elite form after a layoff that essentially lasted three years. Injured in September 2018, Jorden worked his way back to make a cameo appearance in the 2019 Western Semi-Final. He was used sparingly that day, though, which makes Saturday a true return for me.

Jorden finished with five catches on five targets for 85 yards and a touchdown. He looked like the game breaking, elite receiver we saw emerging in the weeks prior to that knee injury so long ago. Jorden’s night could have been bigger had he not had a second touchdown taken off the board after a successful Toronto challenge. Even still, Jorden looks like he’s on track for a monster year.

The most famous CFL graduate from Winnipeg’s Oak Park High School was missing from Winnipeg’s roster on Thursday night. Even without running back Andrew Harris, though, Oak Park was still well represented thanks to the outstanding nights from Brady Oliveira and Nic Demski.

Oliveira stepped in at tailback and Winnipeg’s offence didn’t miss a beat. He finished with 126 rushing yards and 21 more through the air as the Bombers started their Grey Cup defence with a 19-6 win over Hamilton. Not to be outdone, fellow Oak Park grad Demski led Winnipeg with 70 receiving yards on five catches including a 49-yard strike that helped setup the team’s first touchdown.

I know the Lions almost finished a shock comeback on Friday, but that didn’t take away from how impressed I was with Saskatchewan’s offence in a 33-29 win. I thought the Riders looked complete, balanced, and dangerous as they opened up a 32-9 halftime lead. In the process, they confirmed what many thought heading into the season: this is one of the CFL’s most explosive attacks.

Reigning West Division Most Outstanding Player Cody Fajardo was dialed in, completing 80% of his passes for 230 yards and two touchdowns. He spread the ball to his impressive trio of receivers, led by seven catches and 69 yards from Shaq Evans. Kyran Moore went for 49 yards and a touchdown, while Jordan Williams-Lambert finished with 49 yards on seven receptions. And, unsurprisingly, William Powell found the end zone as part of the win. Very quietly Powell led all running backs with 12 touchdowns in 2019.