We already know a few things about recently retired Solomon Elimimian. He was THE linebacker gold standard of the 2010’s. He was still one of the league’s best the last time we saw him suit up. He’s a lock for the Canadian Football Hall of Fame. And I’m here to add one more: he has my vote for best linebacker in CFL history.

I won’t lie; I was caught off guard like many others when Elimimian announced his retirement as free agency opened on Tuesday. I had no doubt the guy could still excel in Saskatchewan, or any other team that might have been interested. But at this point, Solomon should be the only person who gets to make a decision of this magnitude. As such, you know this was the right time for him to call it a career.

I know the All-Time conversations can be contentious, because opinions vary era-to-era. One fact is inarguable, though: Elimimian is one of the greatest defensive players to ever step foot on a CFL field. Now I’m here to argue why he’s the greatest to ever play the position in this league. I believe the case is compelling. 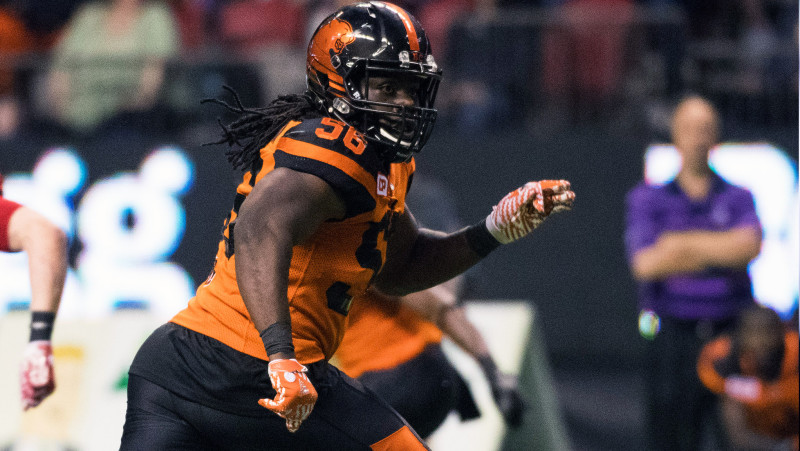 The raw numbers are staggering. Elimimian owns three of the four highest single-season totals in defensive tackles in league history, including his current league record of 144 set in 2017. The craziest part is Elimimian broke his own record of 143 tackles set in 2014 when he also became the first and only defensive player in CFL history to be named Most Outstanding Player. Who would have thought he could outdo that?

Overall, Elimimian retires with 833 career tackles, which puts him sixth on the all-time list. For perspective, however, two season-ending injuries and a stint in the NFL took as many as 37 games away from Elimimian. At his rate of 6.26 tackles per game, the highest in CFL history, that’s approximately 231 tackles missing from his career. Tacking that number on easily moves Elimimian into the top four.

The empirical evidence above is convincing enough, but I’ll add a little more to round it out. Elimimian is one of just four players to ever record 15 or more tackles in a single game and he’s the only one to rack up 14 or more on two different occasions. He retires with one Grey Cup, one MOP nod, two Most Outstanding Defensive Player Awards, a Most Outstanding Rookie Award, and was named a CFL All-Star a shockingly low four times.

But it went beyond just the numbers for Elimimian. He was a devastating force in the middle of the field, hit like a freight train, was nearly impossible to run on, and was a menace to opposing quarterbacks. Sorry…more numbers…but 33 career sacks and eight career interceptions over ten seasons at linebacker is extremely impressive, too.

Elimimian had a presence. He was a defensive leader and saw the game at an elite level, which allowed him to elevate everyone around him. Ask opposing running backs and quarterbacks: they knew when Elimimian was on the field. And they knew what running into a 6’0, 225 pound brick well felt like. When he said he “played with anger,” he wasn’t lying.

That presence extended off the field, too. I’ve had the privilege to interview and be around some of the greats in Canadian sport. I can count on one hand the amount of times I’ve been genuinely star-struck. One of those times came 15 months ago when I had the opportunity for a sit-down interview with Elimimian at a CFLPA event during 2019 Grey Cup festivities in Calgary.

I’m not sure if I did a good job hiding how downright nervous I was, but it was one of those times I made a mental note of doing something special. At the time, Elimimian was still an active player, but I knew I was in the presence of greatness. After all, he’s one of the most dominant players I’ve ever seen play the sport in any league, at any level.

The interview was great as any with Elimimian are and I got over my nerves pretty quickly, but it was just another underlining of how he commands respect in any setting. It’s what made him the natural choice to take over as CFLPA president last year.

As he was a leader on the field, Elimimian is the strong voice needed to advocate for CFL players in the often cutthroat, emotionless environment that is the business of professional football. It comes at perhaps the most crucial time, too, as the planned 2021 season is set play in unprecedented conditions. If I’m a current player, I’m glad that guy is leading the way.

My case for Elimimian as the greatest linebacker in CFL history is both completely objective and completely biased…if that makes a lick of sense. His numbers and accomplishments are objectively as good as we’ve ever seen and may ever see again.

The feeling I had while watching him play over the last decade makes it a true no-brainer for me, though. For nine straight years in BC, the colour orange and the number 56 meant something huge could happen on any play. The same was true for green and the number ten for a year in Regina. Sure, that admittedly skews the objectivity. But that’s what makes these conversations so much fun.

Maybe for you it’s Willie Pless, Wayne Harris, or Dan Kepley. It all depends on when you started watching this league, because those three dominated at different times. It has been Elimimian for me for quite some time. As his playing career officially comes to an end, it has been an absolute privilege to watch.