Let’s be honest: 2020 was a garbage year as a CFL fan. But, almost three weeks into 2021, it has been an exciting time to be a fan of this league. It felt like the buzz started slowly growing when the list of eligible free agents for the coming season was released a number of weeks ago. But things have kicked into full gear since the calendar flipped to January.

Just look at what we’ve seen come down the pipe since our list column. We’ve seen the reigning Grey Cup Most Valuable Player and Most Valuable Canadian sign a new deal. Ditto for one of the league’s most dangerous pass rushers, an extremely underrated receiver, and the owner of the best kicking season in professional football history. Yeah, I’d say we’ve been busy. 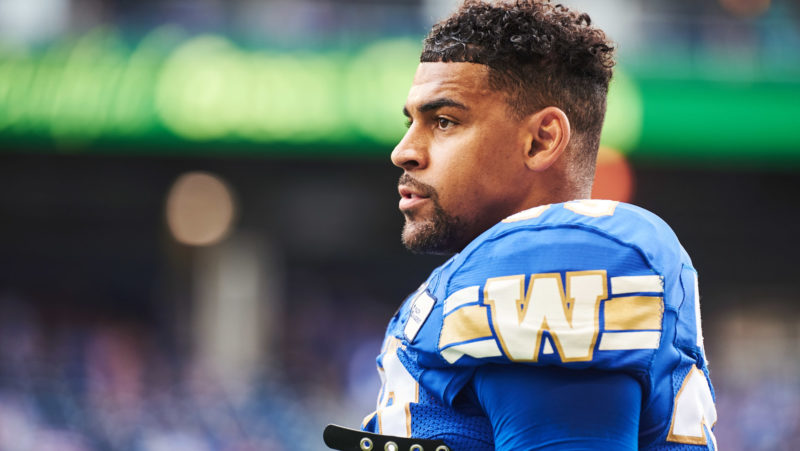 Andrew Harris signed an extension with the Bombers last week and will avoid hitting the open market in February (BlueBombers.com)

Andrew Harris returning to the defending Grey Cup champion Bombers was the biggest headline maker last week, even if it didn’t come as any surprise. Much like fellow All-Star Stanley Bryant, who re-upped a couple weeks ago, it felt like if Harris was going to sign anywhere, it was going to be with Winnipeg.

Harris’s signing means the Bombers have brought back two-thirds of their free agent power trio, with just kicker Justin Medlock still with an expiring contract. The same refrain remains true with Medlock: I’d be surprised if he went anywhere else. But until we get confirmation, it’s something to keep an eye on. Perhaps the restructuring of Willie Jefferson’s contract, which also happened this past week, will make bringing back Medlock a little easier.

Over the last three seasons, Ja’Gared Davis has averaged well over half a sack per game, including a career-high 13 in 2019. As such, the Hamilton Tiger-Cats should be feeling pretty good about getting their All-Star defensive end back under contract for another season. Remember, the Ticats released Davis to pursue NFL opportunities in September, so bringing him back was a nice piece of business.

Even better for Hamilton: they’ve returned their entire starting front four from 2019 for the coming season. Davis rejoins Julian Howsare, Ted Laurent, and Dylan Wynn to officially reunite the most terrifying defensive line in Canada. With that group together again, the Tiger-Cats are well positioned to take a run at a return to the Grey Cup in November.

Saskatchewan has already taken care of lots of business this off-season, including restructuring quarterback Cody Fajardo’s contract and re-signing big name playmakers Shaq Evans and William Powell. But don’t sleep on Kyran Moore after the Riders brought back the rock-solid receiver last week.

Consider Moore the thunder to Evans’s lightning in that Saskatchewan offence. After hauling in 78% of his targets in 2019, we’re talking about one of the most sure-handed receivers in the league. That makes Moore a perfect fit as a ‘Y’ slot receiver and, at just 24 years old, I think he’s just scratching the surface of what’s possible in this league.

Rounding things out over the last seven days, kicker Lewis Ward is back in Ottawa just a few years removed from his record-setting 2018 rookie season. And potential breakout receiver Juwan Brescasin is back with his hometown Toronto Argonauts, still waiting to suit up for his first game in double blue.

Right now, it feels like the league is dropping a big piece of news on us on a daily basis. With free agency less than a month away, I don’t think that pace will be slowing down anytime soon. Yeah, 2020 was no good for football fans in Canada. With how things are trending these days, though, 2021 has already put the prior year to shame.

I wonder if you caught the cool moment with David Onyemata on Sunday afternoon at the same time I did. Seconds after his New Orleans Saints were eliminated from the NFL playoffs by the Tampa Bay Buccaneers, there was Onyemata at midfield lined up to congratulate the greatest quarterback of all-time (arguably, don’t yell at me).

Seeing Onyemata as one of a handful of Saints in line to hug Bucs quarterback Tom Brady really struck me, because it underlined his incredible journey. Sunday concluded Onyemata’s second full season as a full-time starter in New Orleans, which is remarkable if you think about where he was five and ten years ago.

If you had told Onyemata a decade ago he’d be hugging Brady at midfield and playing in Drew Brees’s presumptive final game, I’m not sure he would have believed you. In fact, I’m not sure it would have mattered. At that time, Onyemata had never seen a North American football game, let alone taken a snap. He was in the infancy stages of embarking on a trip that would change everything.

Alone, Onyemata left Nigeria in 2011 to pursue an economics degree at the University of Manitoba. After working his way onto Manitoba’s football team, Onyemata began an almost-overnight transformation from complete football beginner to standout defensive lineman.

A few years later, Onyemata was a J.P. Metras Trophy winner as the top down lineman in Canadian college football. Then, in 2016, he was a fourth round pick of both the Saints and the Saskatchewan Roughriders. Now, fast-forward nearly five years, and we’re talking about one of the top defensive tackles in the NFL.

Onyemata just finished his best season yet in New Orleans. He started 15 regular season games along with two more in the playoffs. Onyemata finished with career best totals in tackles (44) and sacks (6.5) and recorded his first NFL interception on national television in week nine (coincidentally off of Brady).

The season didn’t end the way Onyemata and the Saints wanted. But seeing him right there wishing Brady luck in what could be his final season drove the point home: Onyemata has arrived and planted his flag. For the most recent NFL draft pick out of U SPORTS football, it has been one heck of a ride. And, from what we saw this season, it feels like there’s still lots of road left.