Over the last number of weeks, we’ve been putting together our list of players at each position on the field to start a team to win a championship right away.

Today we’re putting a wrap on the 2020 edition of our Money List by focusing in on the defensive backfield.

This one would have been more difficult, but the NFL departures of fellow elite lockdown corners like Tre Roberson and Winston Rose made Breaux an even stronger candidate. While the aforementioned pair were probably the CFL’s two best in 2019, Breaux held his own in an injury plagued season and would have been right there with them had he not been limited to ten games. Breaux remains one of the most difficult corners in the game to pass on and I’m looking forward to watching him fully healthy in 2020.

Despite only getting into ten games, opposing quarterbacks completed just 52% of their passes when throwing at Breaux last season (credit to Nik Kowalski for the outstanding data). Notably, in the 42 targets he saw, Breaux didn’t surrender a touchdown in 2019. While never a guy with gaudy interception numbers (two career CFL picks), Breaux’s impact needs to be measured using other metrics. When you do that, it’s clear Breaux remains one of the game’s elite corners. 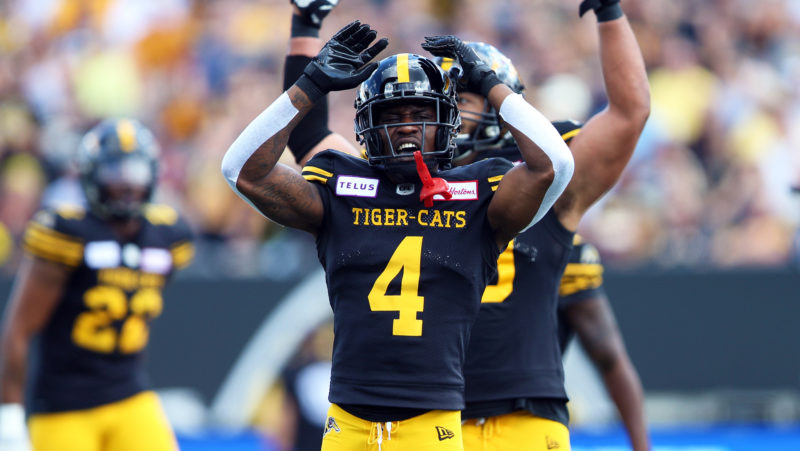 After three seasons in Hamilton, Leonard is now a member of the Calgary Stampeders (Geoff Robins/CFL.ca)

I told you last week there’s a theme to these secondary picks, and that theme is the Hamilton Tiger-Cats. While now a member of the Stamps, Leonard had another outstanding season in 2019 with the Ticats. On 82 targets over 18 starts, opposing quarterbacks completed just 51% of their passes vs. Leonard, one of the best marks in the league. He also finished with four interceptions and a defensive touchdown to round out his solid campaign.

Interestingly, Leonard has primarily played the field halfback position since arriving in the league, but it’s not clear if that’s where he’ll stay with Calgary.

“We’ve discussed me being the boundary corner, boundary half, but they don’t really know yet.” Leonard said last week when I caught up with him. “I’m a DB but I’m playing field half and I’m ready to move wherever. Adjustments are nothing to me…wherever they put me at I’m going to learn the position and play it at the best of my ability.”

Regardless of where he plays in 2020 and beyond, he’s cemented as our money halfback on this list.

Rounding things out at safety is the third member of Hamilton’s 2019 East Division winning squad in Adeleke. After two seasons in Calgary, Adeleke signed with the Tiger-Cats prior to last year and was an instant fit with one of the league’s elite defensive backfields. Adeleke finished with a career-high two interceptions and 52 defensive tackles while providing a great Canadian compliment to an already impressive array.

What is really promising for Adeleke is where things go from here. He’ll turn 25 in July and already has three seasons under his belt, with last year being his most impactful. While already one of the best at this position, the former Carleton Ravens standout is still refining his game. I believe Adeleke has room to grow under a high ceiling and, knowing who he’s surrounded by, Hamilton is the perfect place for that growth to take place.

So with our defensive backfield filled out, our most comprehensive Money List ever is all done. We’ve done this in years past, but in 2020 we expanded areas like “offensive line,” “defensive back,” and “linebacker” to be more specific and focused. The nuances from position to position at each area of the field are subtle but important, which is why we expanded things to allow for those variances.

For sake of comparison, though, I went back to the last time we did a full Money List in 2017 to see how things changed over the span of three years. As you’ll see with our completed list below, some positions saw notable change while some stayed very much the same.

Interestingly, a few players on the 2020 list could very well have been named to the 2017 edition, too. Bryant and Jefferson would easily have competed for the best at their position three years ago, while the same is true in reverse for guys like Laurent, Hughes, Elimimian, and Medlock (the kicking version).

In Medlock’s case, most of his accolades have come when talking about his field goal accuracy, which has overshadowed his work at punter. If you talk to Maver, 2017’s money punter, though, he’ll tell you Medlock is one of the greatest at the craft in league history. It’s good to be able to underscore that with this year’s edition.

Finally, it speaks to the longevity of Mitchell and Harris that they find themselves on this list again. Since we started this project in 2015, no one else has gotten the nod at quarterback or running back. There has been competition in any given year, of course, but despite personal team affiliation, can you really argue any other player at these two positions have been consistently better than either Harris or Mitchell?

Doing this list for 2021 will be interesting, because we’ll be working off a shortened season. Nonetheless, I find this a fun and worthy endeavor, especially with the opportunity to look back and compare things season over season. Until next year, the Money List bids you a humble adieu!