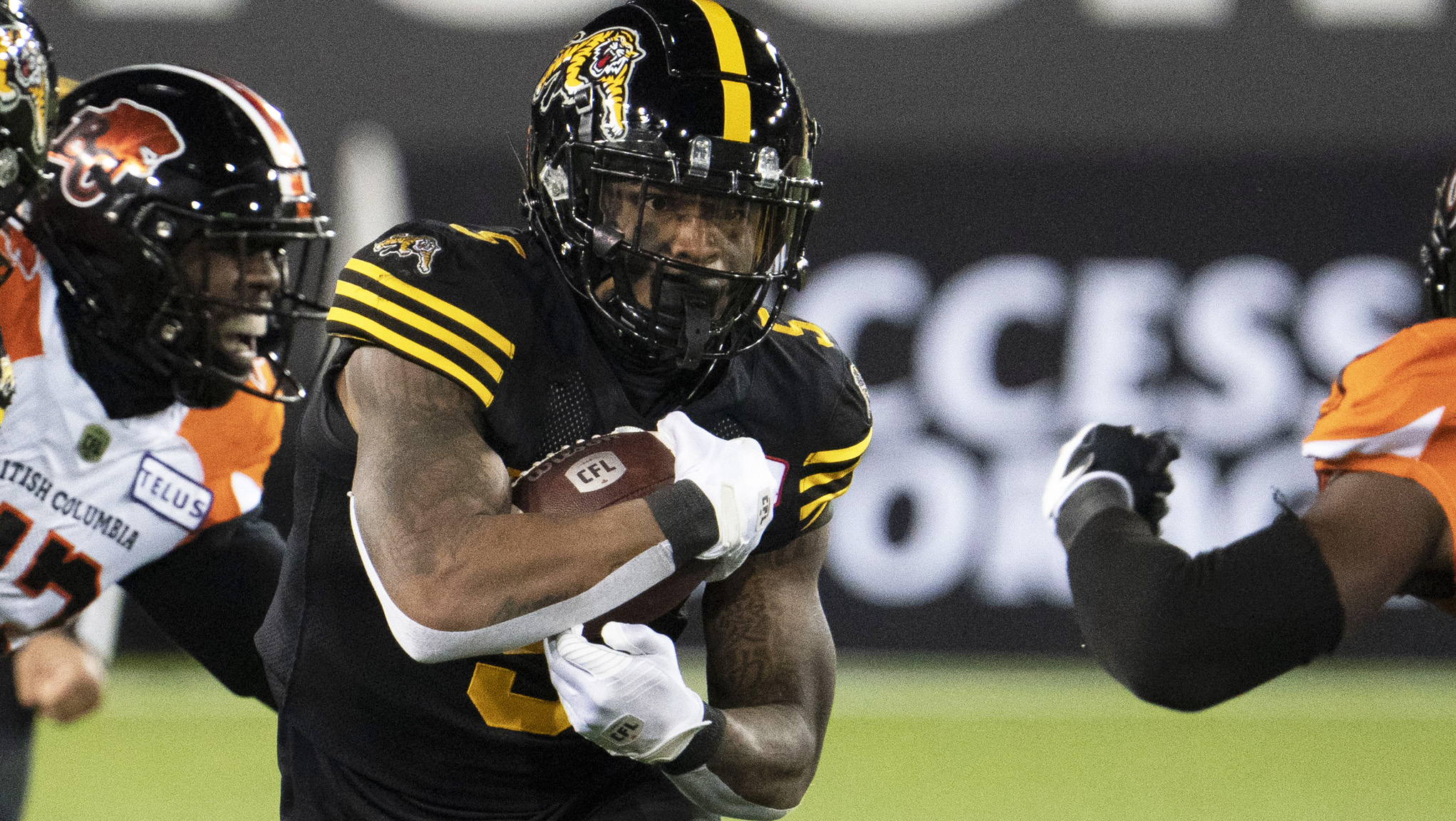 It’s official: three teams from the East Division are post-season bound in 2021. You might ask yourself: why is that significant? Well, this is the first time in five seasons we aren’t seeing a crossover team appear in the Eastern Semi-Final. Knowing how the balance of power has slanted to the West for the last decade, I think some cap tips to Hamilton, Toronto, and Montreal are in order.

Hamilton kicked off Week 14 with a solid 26-18 win over the BC Lions. You can make it three straight wins for the Tiger-Cats and they look like they’re rounding into form. Despite having his string of 300-yard passing games snapped, it was another solid night for quarterback Jeremiah Masoli, which remains one of the most encouraging signs in Hamilton.

Masoli didn’t look like himself early in 2021, but that has started to turn since returning from injury. Masoli is throwing touchdown passes and regularly has his completion percentage up over 70%, but here’s the most impressive part: he hasn’t thrown an interception in five straight starts. For reference, he had four in his two starts prior to sustaining his injury.

There are plenty of other positive signs for the Ticats. Don Jackson has had two productive starts after working his way back into the running back rotation in Week 13. Brandon Banks caught his first touchdown pass of the year and I believe he’s poised for more. And this defence hasn’t allowed more than 24 points in ten straight contests.

Now, as Hamilton is rolling and rounding into form, they’re trying to gain ground on the East Division’s top team: the Toronto Argonauts. Oh, and funny enough, with one game separating them in the standings, these two meet for the fourth and final time Friday night to kick off Week 15.

The Argos are also rolling right now. Toronto’s 23-20 win over Ottawa on Saturday was their fifth in their last six games and they continue to do what they’ve done for most of 2021: limit the wild ups and downs a lot of other teams have dealt with.

The defensive numbers don’t jump off the page for the Argonauts, but this group is getting healthy at the right time. Henoc Muamba has three games under his belt after missing a month. Cordarro Law is coming off his most impactful game after finally making his Toronto debut in week 10. And Cameron Judge was finally able to get back on the field this past weekend after missing almost two months.

On the other side of the ball, the Argos know they’ll be rolling with McLeod Bethel-Thompson until their season comes to an end. While his last three outings haven’t been as strong as his earlier season returns, at least there’s no uncertainty for the rest of the year at the most important position on the field. And, as tough as it was to see John White go down with a leg injury on Saturday, seeing A.J. Ouellette run for 107 yards on 14 carries was encouraging.

The final East Division team to clinch a playoff spot was Montreal, despite their 31-21 setback on the road in Winnipeg to close out the weekend. The 6-6 Als might be the most fascinating group between now and the end of the season, because they have the most to figure out.

Trevor Harris made his first start on Saturday and showed a few flashes on a night where he also looked like a quarterback learning a new team, scheme, and group of receivers. While this has been a difficult year for Harris, I don’t believe the guy has “lost it” when it comes to his ability to be a CFL starter.

With two games to go, Montreal can still find a way to host a playoff game, but for me, that’s not the most important thing. Instead, it’s all about getting Harris up to speed and getting comfortable with a talented receiving crew led by Eugene Lewis. If that happens, and with what William Stanback has done all season, the Als can make some real noise come playoff time.

Toronto aggressively improved their team heading into this year. Hamilton was coming off last season as the division’s powerhouse and is starting to round into form after a slow start. And Montreal is showing us their return to relevance in 2019 wasn’t a flash in the pan. It’s nice to see three East Division teams back in the playoffs.

2021 will be a season the Edmonton Elks will want to put behind them quickly. Positively, though, the Elks have zeroed in on an important piece for next year. By acquiring quarterback Nick Arbuckle from Toronto and then signing him to a contract extension, Edmonton is getting an important piece of business taken care of for next season.

Knowing Arbuckle will be part of the 2022 picture is huge for the Elks and allows them to slowly integrate him into the picture this year. Things didn’t work for Arbuckle as envisioned with the Argos, but Edmonton has secured a guy who still has the potential to be a long-term starter in this league.

Finally, let’s raise a glass to what was an incredible life lived by Angelo Mosca. The legendary member of the Tiger-Cats passed over the weekend at the age of 84 and leaves one heck of a legacy. Five Grey Cup titles, two CFL All-Star nods, and some epic feuds with legends like Bob Backlund and Pat Patterson…yeah, Mosca did a lot in his 84 years.

To one of Canadian football’s legends, rest in peace.