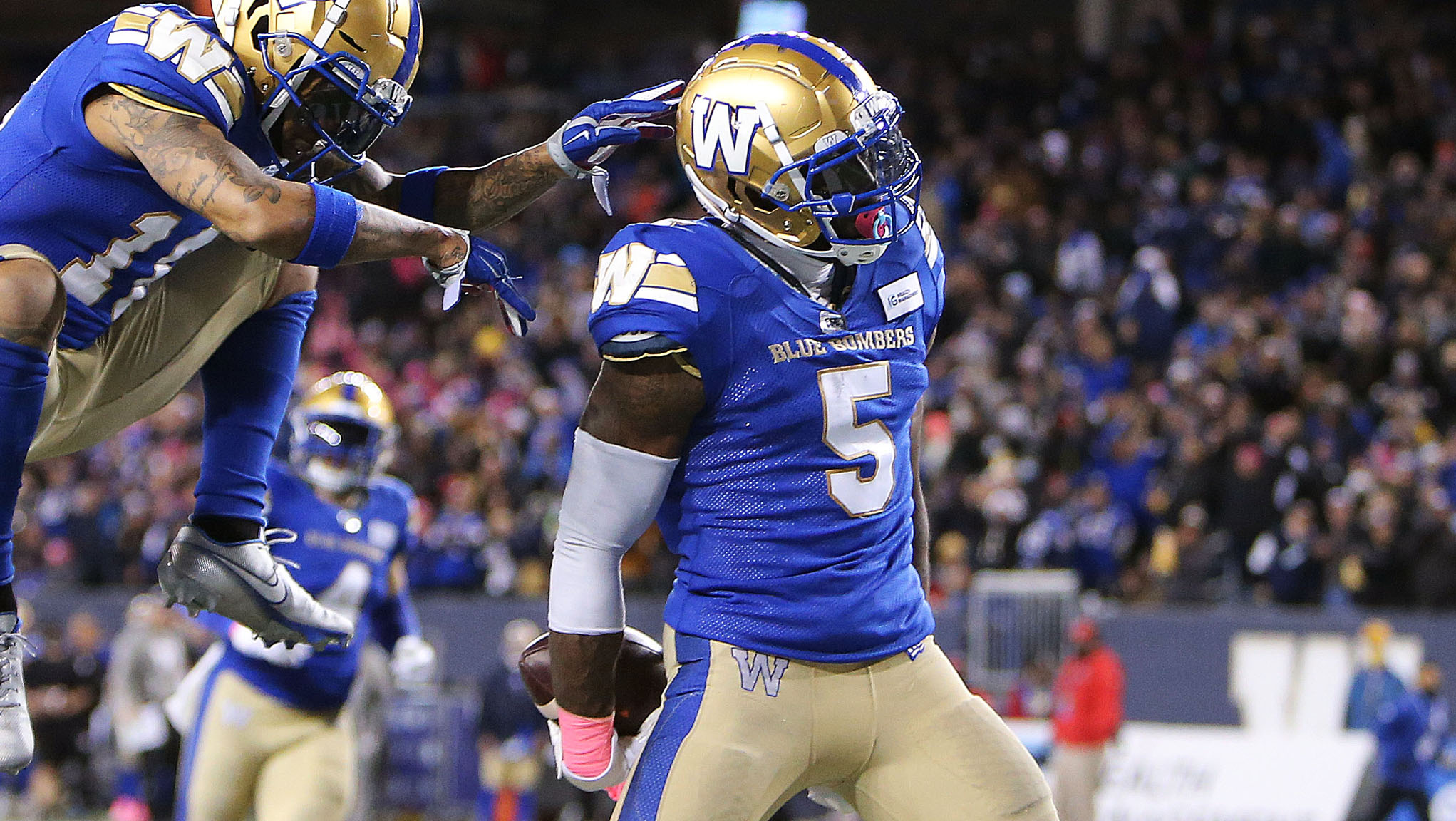 What else is there to say? What more can be written? Those are the questions this column has asked in recent weeks when making light of Winnipeg’s dominance this season. But after Saturday’s 45-0 win over the BC Lions, the Bombers deserve some (more) appreciation for just how good they’ve been this year.

Winnipeg was the first team to clinch a playoff spot in Week 11 and they followed that up this week by clinching the West Division regular season crown and a home date for the Western Final in early December. To put that in perspective, the Bombers are already in playoff preparation mode while six other teams look like they’ll be fighting and clawing right to the very end.

RELATED
» Bombers clinch West Division with dominant win over BC
» Watch: Jefferson gets in on the scoring with pick-six
» All three phases contribute in Bombers win over Lions

Let’s put this further into perspective to really frame just how dominant this year has been for the defending Grey Cup champions. With their victory at home to the Lions, Winnipeg has now won eight straight. In that stretch, only two of their wins have been by a possession or less. And here’s the scariest part: during this win streak, Winnipeg has outscored their opposition by a staggering 239-83.

In recent weeks, I’ve seen suggestions on social media that this Bombers defence is one of the best in CFL history. Well, it sure is hard to mount a major argument against that claim. What Winnipeg is doing to other teams right now is ridiculous and they’re not showing any signs of slowing down.

To fully get a sense of what the Bombers are doing, take into consideration their defensive passing statistics. Through 11 games, Winnipeg has allowed just three touchdowns and 18 points in the passing game. Over an 18-game campaign, that projects to just under five passing touchdowns against, or just a little under 30 points.

That all sounds pretty good, right? Now I’ll submit this for further consideration: since 2004, the best full season defending the pass came from the 2018 Calgary Stampeders. That team ended up allowing 11 touchdowns and 66 points through the air, or more than twice as much as what the Bombers are on pace for. That really drove it home for me.

Through more than three quarters of their season, Winnipeg can stake strong claims to virtually every year end award. For Most Outstanding Player, for instance, both Zach Collaros and Willie Jefferson have great cases. Jefferson, Jackson Jeffcoat, and Adam Bighill are all in the Most Outstanding Defensive Player conversation. And Mike O’Shea is the leading candidate for Coach of the Year.

It’ll now be interesting to see how the Bombers approach the rest of the regular season. They’re on a Week 13 bye before playing their last three games against Montreal (x2) and Calgary. And while Winnipeg has internal regular season goals I’m sure they’d like to accomplish, let’s be honest: the only thing that matters now is the month of December.

The Bombers will be using their last three games with a sole goal in mind: to be as prepared and dialed in for the Western Final as possible. O’Shea will likely be strategically resting players while balancing keeping his team fresh and in game shape. As such, we might see some of Winnipeg’s crazy “on pace” numbers change, which is understandable.

One-game playoffs always possess risk. All it takes is one bad afternoon, one bad quarter, or one bad decision. But the Bombers have been on point for the vast majority of their first 11 games, so nothing leads me to believe they’re in danger of a major letdown. They’ll be heavily favoured in every game they play for the rest of 2021, and they’ve earned it.

Week 12 saw huge standings swings in both divisions, which looks to set up an outstanding last quarter of the season. Who’s finishing on top of the East Division? Where’s the Western Semi-Final going to be played? Will there be a crossover this year? All of those questions will be answered in the next four weeks, but we might be going right down the wire.

Montreal made the first move over the weekend with their convincing 37-16 win over the Argonauts. As a result, the Alouettes have moved into a tie with Toronto for top spot in the East with both teams at 6-4 with no more head-to-head matchups on the slate.

Things are trending nicely for Montreal, too. William Stanback has busted off 100 or more rushing yards in four of his last five, including 203 and a touchdown on Friday. Eugene Lewis now leads the CFL with 815 receiving yards. And quarterback Matt Shiltz is 2-0 as this team’s starter, which means the Als aren’t being forced to rush Trevor Harris into game action.

The Tiger-Cats were next up and they answered the bell with a 32-3 win over Ottawa. It was a big win for Hamilton in the East Division playoff picture, as they kept pace with Montreal and gained on Toronto. And, perhaps more significantly, the win, coupled with BC’s loss, moved the Ticats two games clear of crossover elimination.

Most encouraging was quarterback Jeremiah Masoli’s outing, as he threw just three incomplete passes as part of a 320-yard, two-touchdown performance. After missing the first half of the season, receiver Bralon Addison has looked strong in his first three games. And this defence is starting to round into the elite form we’re used to.

And then there was Saskatchewan. After losing their last two games to their archrival, the Riders needed a big road win over Calgary in game three and they got it. On offence, Cody Fajardo had Saskatchewan stretching the field better than we’ve seen in a while. Also important was how involved Duke Williams was, as the dynamic receiver finished with 48 yards on three catches.

Defensively, the Riders picked off Calgary’s Bo Levi Mitchell three times and held their offence to seven second half points. It was a huge and much-needed performance that puts the Roughriders right back in the driver’s seat to host the Western Semi-Final. Knowing how huge a home field advantage they possess, that’s not insignificant.