With momentum building for, and rumours buzzing around, a shortened CFL season, I thought we should start doing some look-ahead work in the event we get to watch football this year.

The 2020 free agency period seems like eons ago, I know, but let’s look back to what was a very busy and important stretch.

Later this month we’ll focus in on the top offensive signings, but today we’re taking a look at the gentlemen on the other side of the ball. 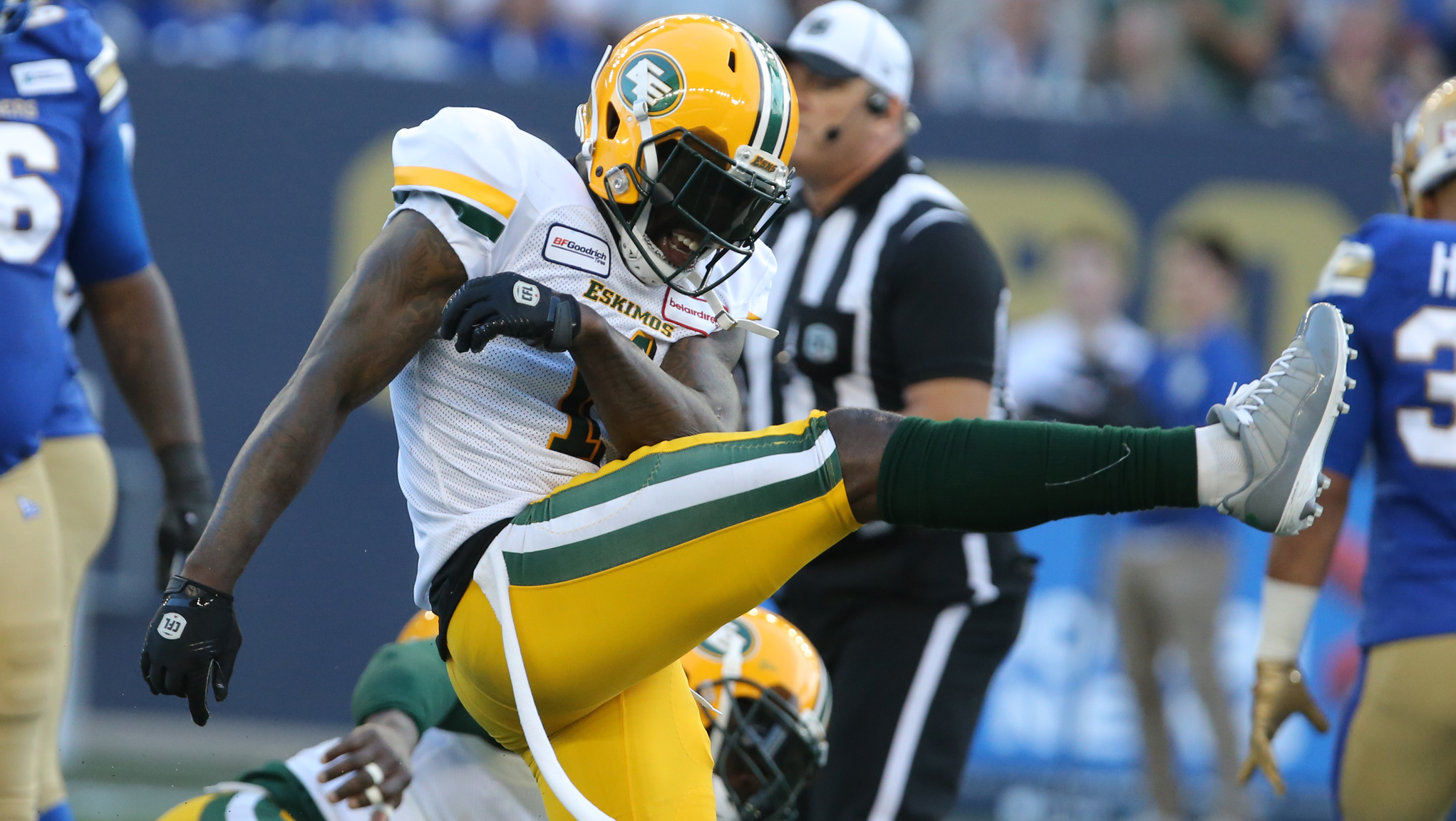 After a year in Edmonton, Larry Dean returns to an energetic Hamilton linebacking corps where he already knows the system as well as the personnel (CFL.ca)

After one year in Edmonton, Dean signed back with the Ticats early in free agency, which just felt right. Dean spent the first three years of his CFL career in Hamilton and put together another typically productive campaign with the Eskimos in 2019. It’s a great score for the Tiger-Cats, as one of the league’s elite defensive units now brings home one of the best middle linebackers in the game.

Dean finished last year with 86 defensive tackles, which tied him for fifth in the league with new teammate Patrick Levels (more on him later). With Levels, Simoni Lawrence, and Rico Murray, Hamilton was already looking at an elite group of outside linebackers in 2020. Now that Dean is slotted down the middle, it’s tough to find a better crew in the league. 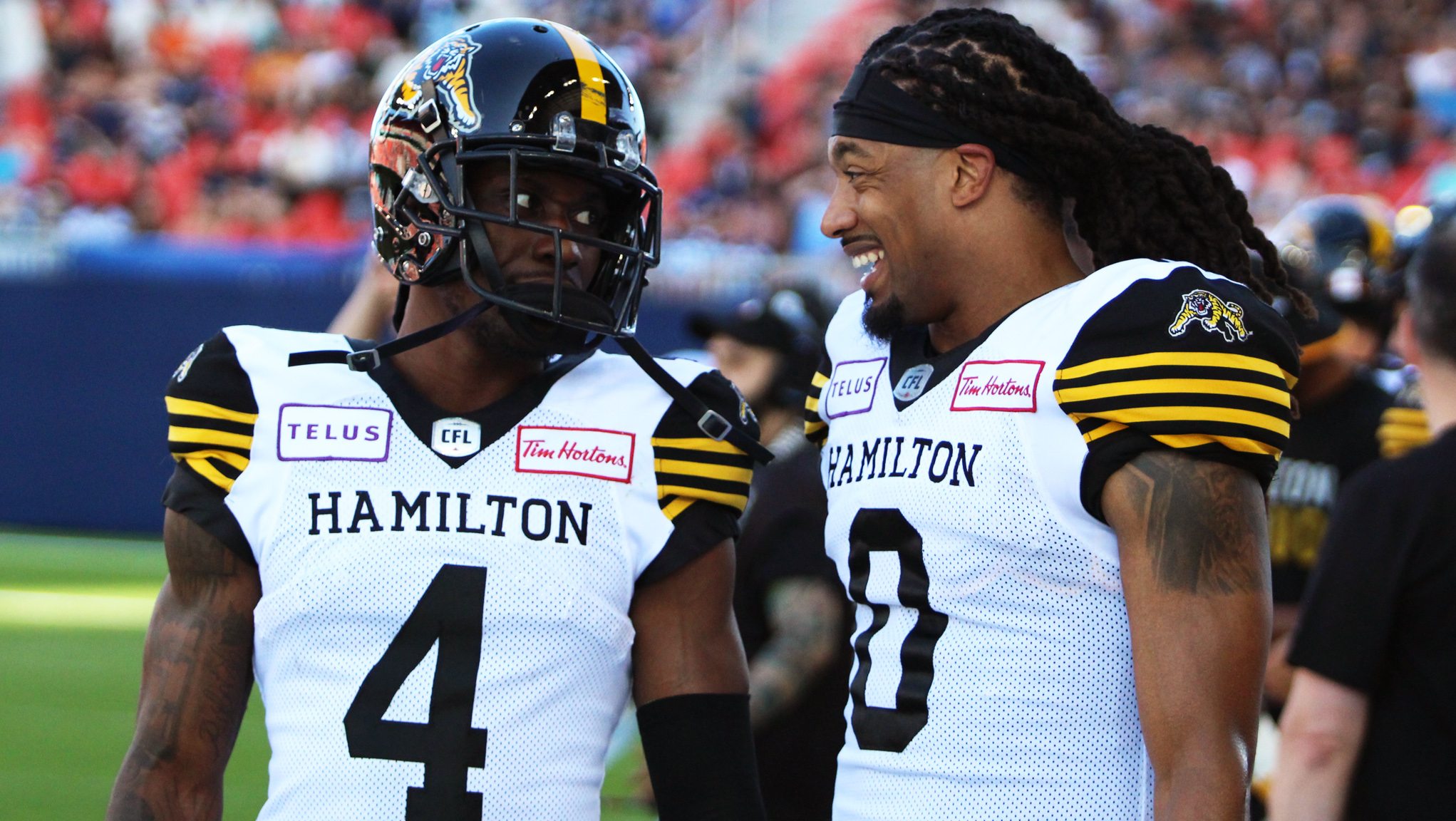 Richard Leonard (left) has left Rico Murray (right) and headed West to a Calgary squad desperate to plug holes in their secondary (CFL.ca).

One of Hamilton’s few losses in free agency was Calgary’s gain. Leonard is one of the league’s elite halfbacks and the Stampeders could easily slide him to cornerback, too. Leonard was among the most difficult DB’s to pass on last season, with opposing quarterbacks completing just 51% of passes against him on 82 targets (metrics courtesy Last Word on Canadian Football).

Knowing the personnel Calgary lost in the defensive backfield over the offseason, a player of Leonard’s caliber was a huge get. It was also very out of character for the Stampeders. General manager John Hufnagel rarely makes big splashes in free agency, especially on day one. With Leonard available, though, Calgary decided to pounce and they reeled in the biggest impact defensive back on the market. 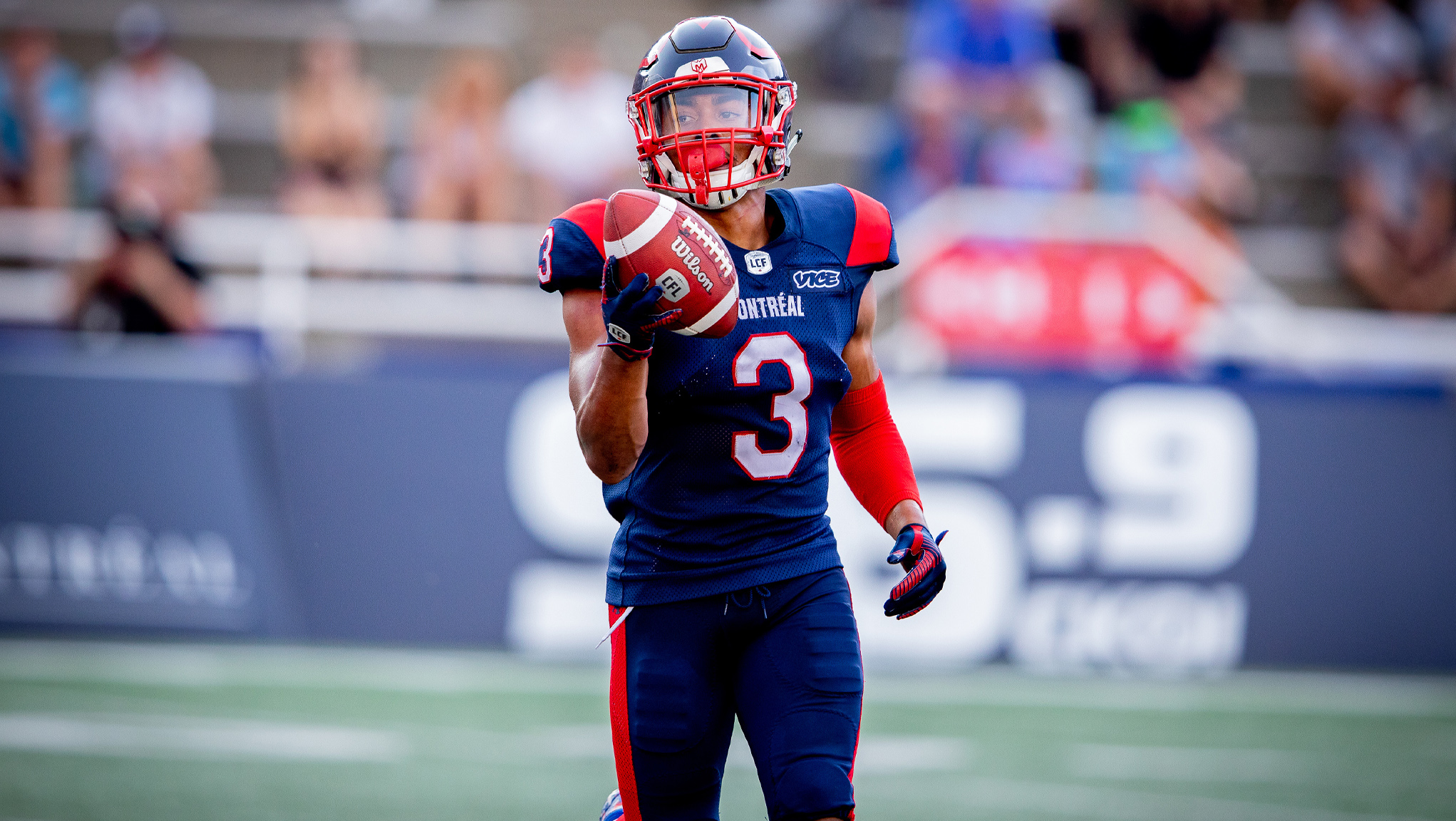 Patrick Levels hops from the Alouettes to a division rival, the Hamilton Tiger-Cats, trying to ensure that one of the league’s top defences doesn’t miss a beat.

I’m still not sure how co-GM’s Drew Allemang and Shawn Burke did what they did this offseason. They kept Hamilton’s entire starting defensive line together, brought back other key players like Murray and Jumal Rolle, and still found a way to add Dean. Well you can add one more edition to that list in Levels, one of the CFL’s elite SAM linebackers.

Earlier this offseason, we selected Levels as our outside linebacker for the 2020 Money List following his first season with Montreal. Now a member of the Ticats, Levels brings his elite speed, athleticism, and cover ability to an already stacked defence. 2019 saw Levels finish with 86 tackles, five sacks, and two forced fumbles and Hamilton will have the ability to drop this guy back into coverage any given play. Yep, it has been a good offseason for the Tiger-Cats. 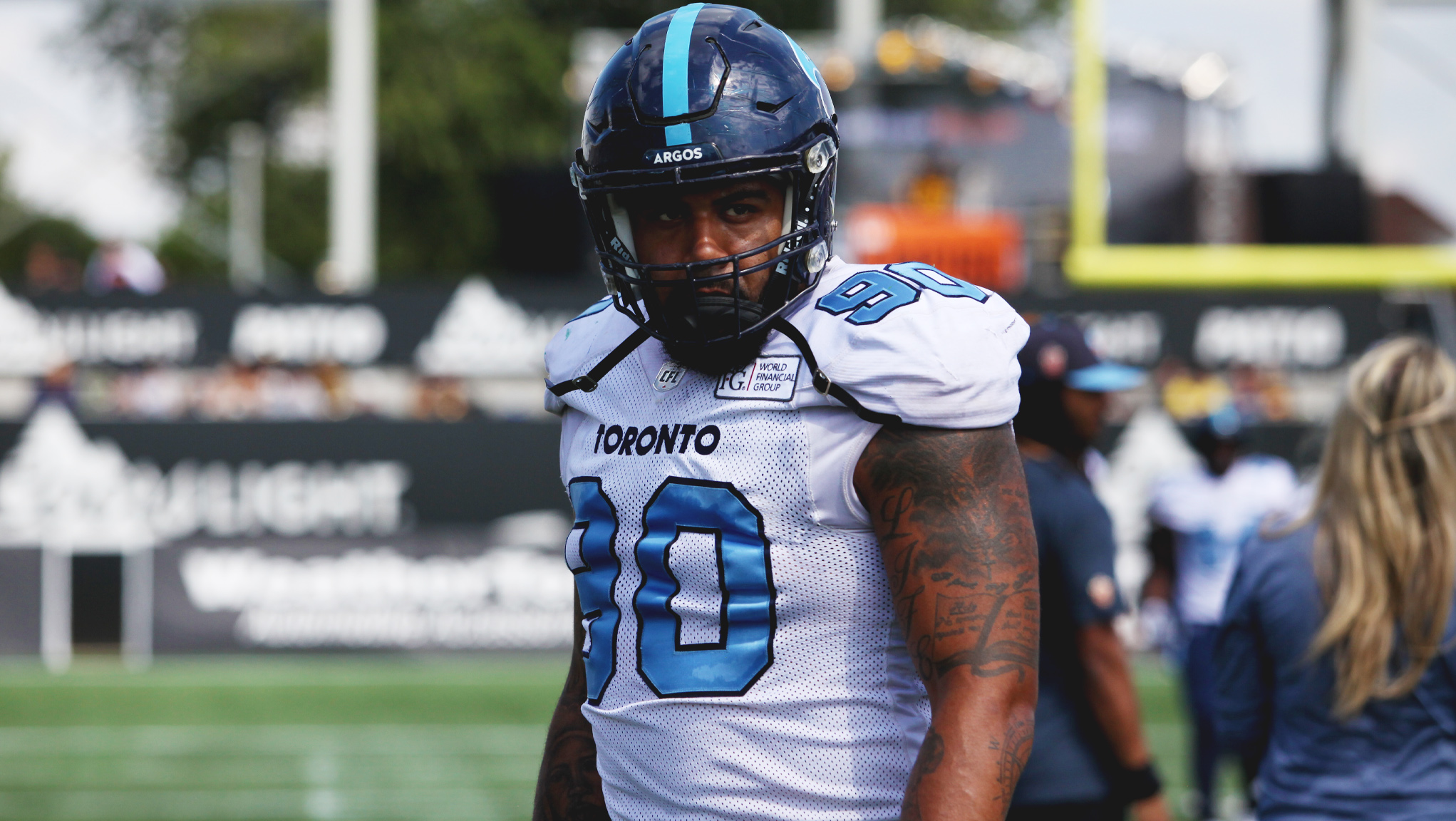 The Argos loss on the interior of their defensive line is Ottawa’s gain after hulking DT Cleyon Laing jumped ship in the off-season (CFL.ca).

Hope springs eternal in Ottawa after a nightmare 2019 season. The REDBLACKS have a new head coach in Paul LaPolice and they were active in free agency, too. Ottawa added cover linebacker Don Unamba, who almost made this list, and crushed it by adding four-time All-Star Laing.

Laing is one of the league’s best interior defensive linemen and is coming off a 2019 season that saw him finish with seven sacks in 15 appearances with Toronto. Not only does Laing force double teams on the inside, he also comes with a Canadian passport. That gives the REDBLACKS some great flexibility with their ratio. 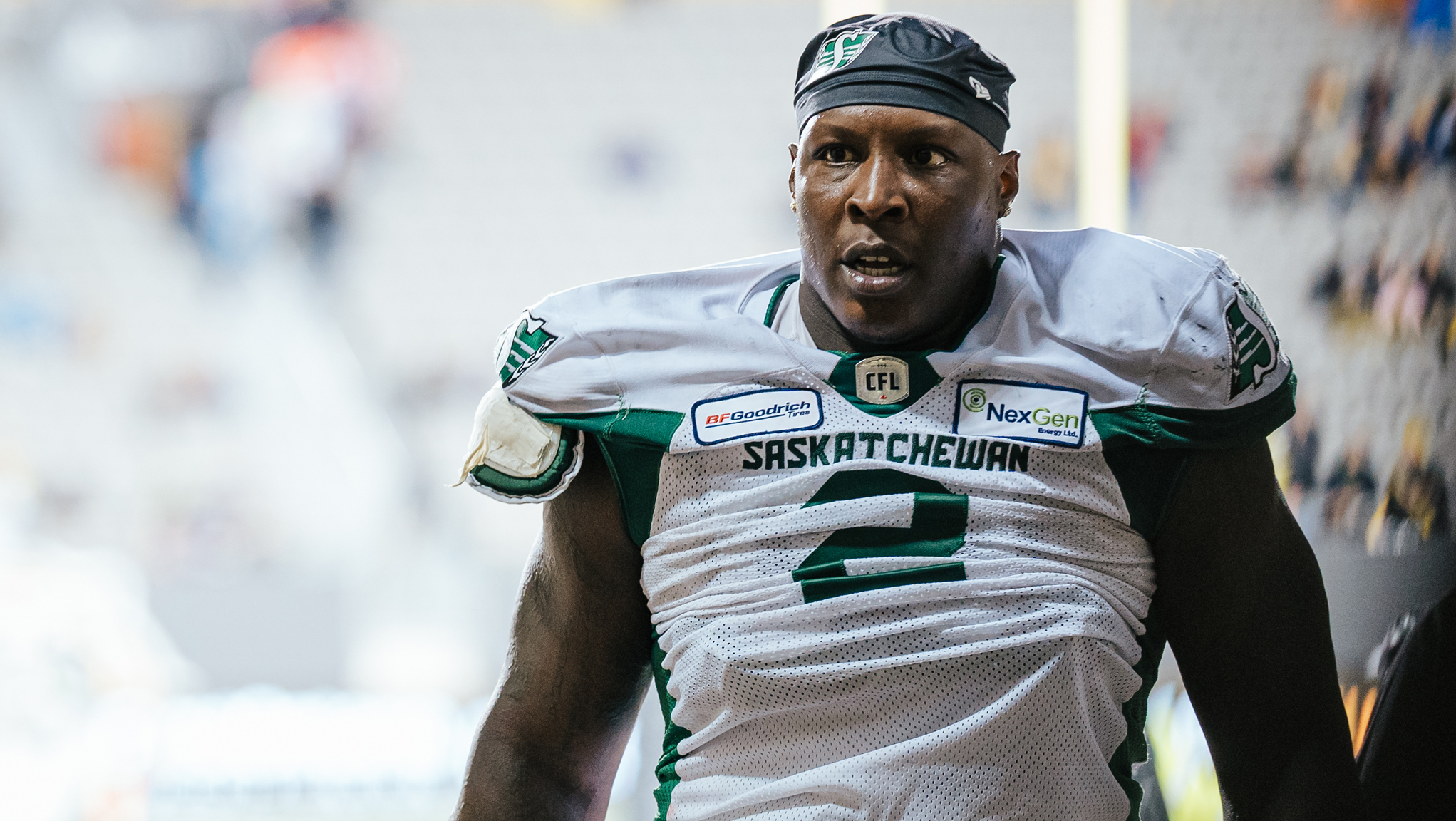 His production was down but his impact is still considerable as Micah Johnson heads to the BC Lions after one season in Saskatchewan (Johany Jutras/CFL.ca).

Yes, Johnson is coming off a down 2019 season, his first and only with the Saskatchewan Roughriders. But I still believe the three-time All-Star has the ability to be the most disruptive defensive tackle in the league. Johnson finished last season with four sacks, which is lower than what we had seen from him prior to leaving Calgary. But I believe he’s primed for a big time bounce back.

Prior to last season, Johnson was in a league of his own when talking about dominant interior lineman. I don’t believe that just disappears in the snap of a finger. With Johnson’s mixture of size, strength, and speed, I think BC nailed it with this signing in February, even if it flew a little under the radar.

If you haven’t voted on the CFL All Decade Team presented by LeoVegas, make sure you get your picks in before the next round opens. Tomorrow the window for running backs and linebackers opens up, which will be another really fun exercise.

Next week’s MMQB should be good, because I can give you some of my choices from the first window of voting. As I talked about last week, choosing my top five receivers was an extremely difficult process knowing how many elite ones came through the 2010’s. I’m looking forward to seeing how different my choices are from yours.