Week 7 (yes, we’re here that fast) of CFL Fantasy Football Presented by Casumo won’t have as much potential for a high-scoring weekend due to the fact the REDBLACKS — who have allowed 96 points in their last two games — are off. However, two of this week’s four matchups offer fantasy users a chance to pick up points as the first half comes to an end.

Hamilton will be without Dane Evans ($10,129) at pivot when the Ticats host the Stampeders on Friday night, but all signs are pointing toward Cody Fajardo ($12,014) remaining in the Roughriders’ lineup later on Friday.

This week leans strongly toward receivers, with at least one being a strong value play.

One thing’s for sure: regardless of who’s at pivot in Calgary, finding Jorden is Priority No. 1. Over the past three games, Jorden has been targeted 34 times, catching 28 of those for 359 yards and one major. He’s been one of the most consistent receivers in fantasy this season, scoring at least 14.7 fantasy points in four of his six games, including each of the past three.

Hamilton’s pass defence is second in lowest completion percentage allowed (60.7 per cent), yet the Ticats do share the league lead with eight passing majors allowed. While Bo Levi Mitchell ($9,900) was rusty in Week 6, he did find Jorden 14 times, completing 12 for 159 yards and a score. Fantasy users should consider building around Jorden and adding Mitchell for double the impact.

Masoli is likely to return to the starting lineup and gets a plumb matchup in the form of a Stampeders pass defence that allows 303.2 passing yards per game, second-worst in the league. It feels like playing Masoli is a natural decision on most weeks, but there’s a reason why Masoli was benched in favor of Dane Evans going into Week 3.

Hamilton led the league in yards per pass attempt the previous two seasons but coming into Friday, they ranked eighth in that category, with Masoli’s 5.6 yards per pass attempt a huge reason why. Tiger-Cats pivots have been sacked 20 times this season and it’s unlikely that all-stars Brandon Banks ($12,970) and Bralon Addison ($11,013) will be available. Considering that Calgary comes off a game where they recorded seven sacks on Trevor Harris, it’s best not to invest in Masoli against a Stamps’ D that may have turned around their season last week.

The one thing missing in Saskatchewan’s passing game the past two weeks has been the ability to deliver high-impact plays. Enter Lenius, who has been mildly targeted all season while also showing his big-play potential, which included a 53-yard reception in last week’s loss to Winnipeg.

The second-round pick of the Roughriders in the 2019 CFL Draft has a chance to establish himself while Shaq Evans remains sidelined. With a 14.6 yards per catch average on his 14 receptions, the only thing Lenius needs is for Cody Fajardo to show a commitment to him. If you’re looking for a value play this week, Lenius is a low-end gamble that could result in elite-level results.

Getting the ball downfield has been a monumental challenge for Arbuckle the past two weeks, as the Argos’ pivot has managed a paltry 6.4 yards per attempt. The number is shocking considering the amount of firepower in the Toronto receiving corps, as is the fact Arbuckle has thrown just three touchdowns in his 120 attempts.

Obviously, a 1:30 touchdowns to attempts ratio isn’t going to cut it; however, don’t bank on Arbuckle to discover his inner Ricky Ray on Friday against a Roughriders’ defence that allows just 333 offensive yards per game and leads the league with 16 sacks. Starting this version of Nick at Night won’t carry a fantasy lineup far this week. 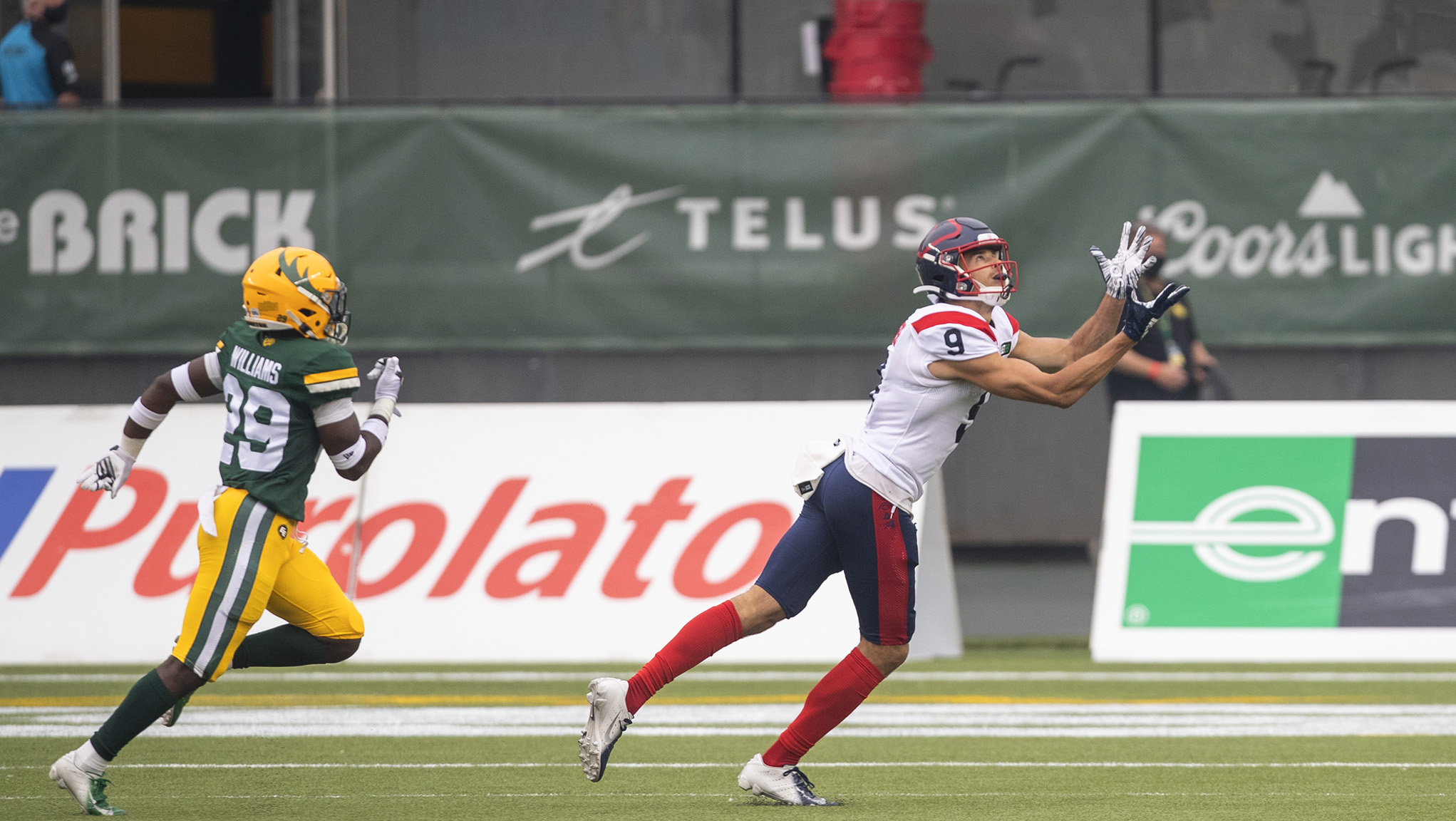 Alouettes’ receiver Jake Wieneke has been consistently productive from the jump this season, making him a great fantasy option (Photo: The Canadian Press)

Jake From Montreal has been a big insurance policy for both quarterback Vernon Adams Jr. ($12,766) and the fantasy users who have carried him in their lineups all season. Wieneke has seen his salary skyrocket behind outings of 24.6 fantasy points (Week 3) and 30.8 FP (Week 5) while averaging double digits in each of his four games.

The Lions are middle of the pack in pass defence, but don’t let that keep you from adding Wieneke into your lineup. This shapes up to be a track meet that both Adams and BC pivot Michael Reilly ($10,603) are more than up to the task to handle. Look for Wieneke to approach double-digit targets while being a strong candidate to find the end zone at least once.

We keep waiting for the breakout game for Cooper, who has just 147 rushing yards in his first three games. Cooper is averaging a solid 5.1 yards per carry yet held under 10 carries in two of those contests.

Montreal is seventh in rushing yards allowed per game (106), and only the Blue Bombers (5.6) allow more yards per carry than the 5.4 yards per tote that the Alouettes run defence yields. What makes investing in Cooper more frustrating is that he’s yet to become involved in the passing game, catching just three passes. It’s best to look elsewhere beyond Cooper when it comes to Week 7 production from your fantasy backfield.

Kenny Lawler ($8,386) has been impressive, but Demski has emerged as an underrated fantasy performer. Demski has averaged at least 12 fantasy points in each of his four starts, including last week’s 18.4 FP performance. The Blue Bombers aren’t going to light up the Edmonton sky with a high volume of attempts, yet they are efficient with their downfield attack. Demski takes pressure off Lawler and Darvin Adams ($6,865) and is in a good position to take the pressure off your fantasy lineup.

Just when we thought Harris was about to go on a tear, the Calgary defence held him to a season-low 6.8 fantasy points last week. This is the second time this year Harris has been held under 10 fantasy points with his passing and when one considers that outside of his Week 5 breakout of 31.9 FP, his production has been far less than stellar thus far. The Bombers have allowed a league-low two passing majors this season and are second only to the Lions (eight) with seven interceptions. Remember that four of Harris’ six majors came in Week 5, and the signs strongly point toward placing your fantasy fate elsewhere.