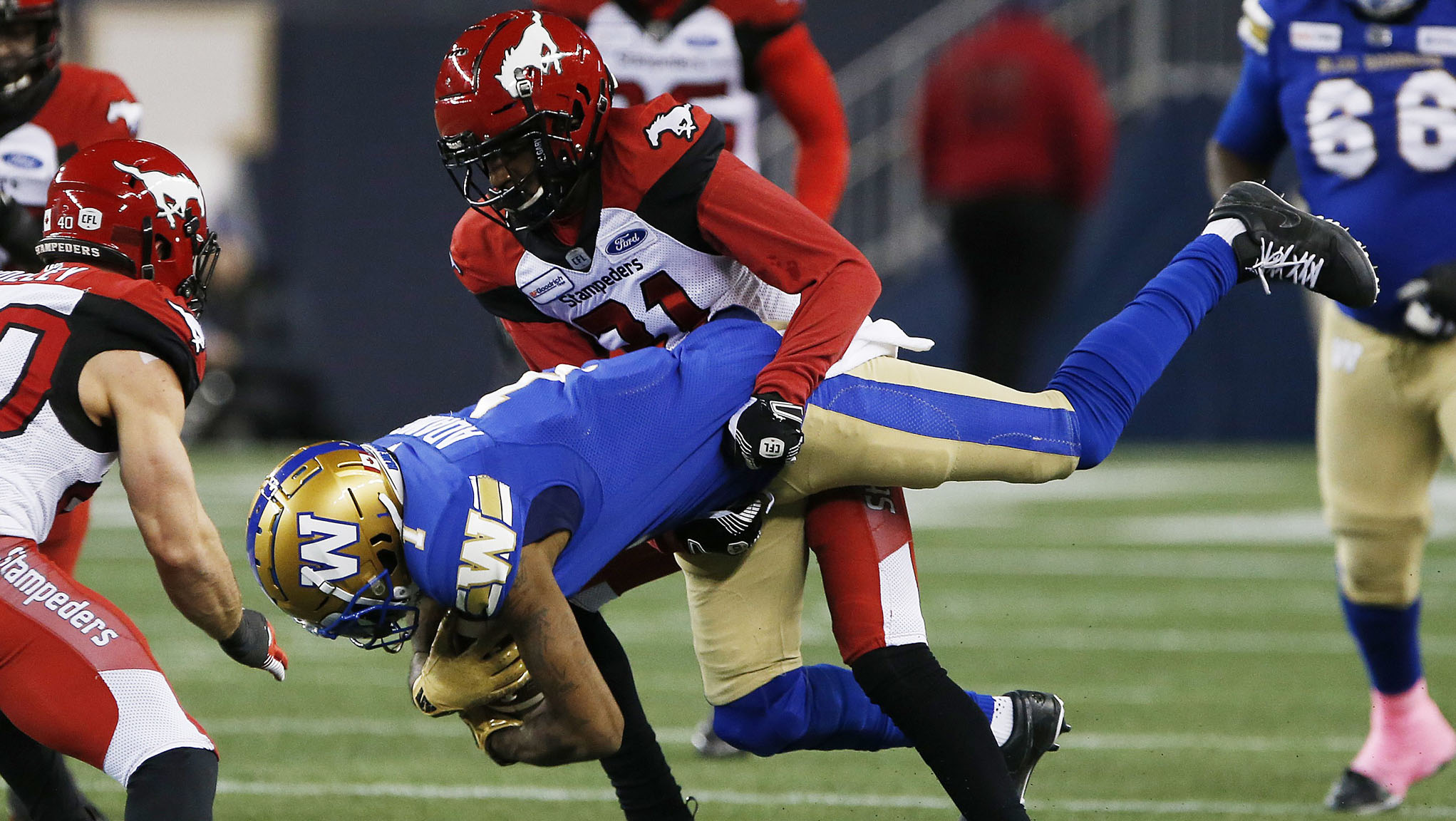 CALGARY — The Calgary Stampeders have signed American defensive back Tre Roberson to a contract that will keep him with the Red and White through the 2023 season.

Calgary’s nominee for Most Outstanding Rookie in 2018, Most Outstanding Defensive Player in 2019 and a West Division and CFL all-star in 2019, Roberson returned to the Stampeders in October after a stint with the National Football League’s Chicago Bears. He made three regular-season starts at cornerback, recording nine tackles and forcing a fumble. Roberson also started the Western Semi-Final.

“Tre has established himself as one of the top defensive backs in the CFL and I’m pleased that he has made this commitment to the Stampeders,” said Stampeders president and general manager John Hufnagel. “With his coverage skills and playmaking ability, he will be a very important part of our defence over the next two seasons.”

Roberson was a member of the 2018 Grey Cup team, as his interception clinched the championship-game victory over the Ottawa REDBLACKS.

“As I said when I re-signed with the Stamps in October, Calgary is home for me,” said Roberson. “I’m comfortable here, I love my teammates, this organization and this city and this is where I want to be. I’m really looking forward to bringing this team and city another championship.”

In 35 regular-season games for the Red and White, Roberson had 104 tackles including four tackles for loss, 10 interceptions including a pick-six, 18 knockdowns, three forced fumbles and two fumble recoveries including one that he returned 93 yards for a touchdown.

In addition to his time with the Bears, Roberson attended training camps with the Minnesota Vikings in 2016 and 2017 before joining the Stampeders.

Bethune played four seasons at Alabama A&M. In 38 games with the Bulldogs, he registered 153 tackles including 33.5 tackles for loss, 16.5 sacks, five forced fumbles, three pass breakups and one interception. As a senior, he lead Alabama A&M with 50 tackles, 9.5 sacks and 16.5 tackles for loss as he was named first-team all-Southwestern Athletic Conference.

Sprinkle joined the Stampeders in September and was on the practice roster until he was activated for the final regular-season contest. He made a start at defensive tackle and recorded two tackles.

He played 29 games over parts of five seasons at Ohio State and made 20 tackles including three tackles for loss and added one pass breakup. He was elected a team captain as a senior as the Buckeyes would go on to win the Big Ten championship.

Coker finished the 2021 season on Calgary’s practice roster. He came to the Stampeders after spending time with the National Football League’s Houston Texans.

Coker played 24 games over four seasons at Rhodes College, a Division III school in Memphis, Tenn. He earned American Football Coaches Association Division III All-American honours as well as first-team all-Southern Athletic Association recognition in each of his final two seasons. He was the first Lynx player in program history to be named all-American in consecutive years. In 2018, he was part of an offensive line that helped the Lynx rush for an average of 176.3 yards per game.

Ware signed with the Stampeders in September and was added to the practice roster. He signed as an undrafted free agent with the NFL’s Indianapolis Colts in 2019. Ware spent time on the Tampa Bay Buccaneers’ practice squad in 2020.

A sixth-round draft selection of the Redblacks in 2020, Cowan started the 2021 season in Ottawa and appeared in his first three career CFL games. He signed with the Stampeders on Oct. 11 and played three games for Calgary.

Cowan played 23 regular-season games and two playoff contests over three seasons at Wilfrid Laurier University. He missed the entire 2018 season with a wrist injury. He played primarily on special teams as a rookie for the Golden Hawks’ Ontario University Athletics championship team in 2016 and was a starter in 2017 and 2019. For his Laurier career, Cowan had 84 total tackles including 9.5 tackles for loss as well as 3.5 sacks, two pass breakups and one forced fumble.

All three players spent time on the Stampeders practice roster during the 2021 season.

Aiolupotea-Pei (name is pronounced mee-see-OH-nuh EYE-oh-loo-POH-tay-uh-BAY-ee) started the season on the Edmonton Elks’ practice roster after being Edmonton’s second-round selection in the 2021 global draft.

The New Zealander made six starts in 25 games over two seasons at Washington State, recording 29 tackles including 4.5 tackles for loss, 3.5 sacks and one forced fumble. He was invited to the Hula Bowl following his senior season.

Prior to suiting up for the Cougars, he played at Riverside City College in California.

Comeau played 19 games over three seasons (2018 and 2019, 2021) at the University of Calgary and was part of the Dinos’ Vanier Cup-winning team in 2019. During the 2019 regular-season, Comeau was part of a Calgary offensive line that allowed just 14 sacks in eight games and helped the Dinos score an average of 30.8 points per game. In 2018, the Dinos scored 44.0 points in eight games and allowed just eight sacks.

Prior to attending the U of C, Comeau played junior football in BC with the Okanagan Sun.

Whiting attended training camp with the Stampeders and also spent time with the Hamilton Tiger-Cats in 2021. He was selected by the Montreal Alouettes in the seventh round (57th overall) of the 2019 CFL draft and he attended the Als’ training camp in 2019 before returning to the University of Saskatchewan.