CALGARY — Canadian linebacker and special-teamer Riley Jones, who spent four years with the Stampeders and was a member of Calgary’s 2018 Grey Cup-championship team, has announced his retirement from the Canadian Football League.

Jones, born in Mississauga, Ont., and raised in Tsawwassen, B.C., made the Stampeders roster in 2017 as an undrafted free agent and played 49 regular-season games and five post-season contests during his time with the Red and White.

RELATED
» Dave Dickenson and Bryan Chiu on The Waggle
» O’Leary: Rogers Lehew helped shape the Stamps
» Is the Next One Out There?: A look at Canadian QBs 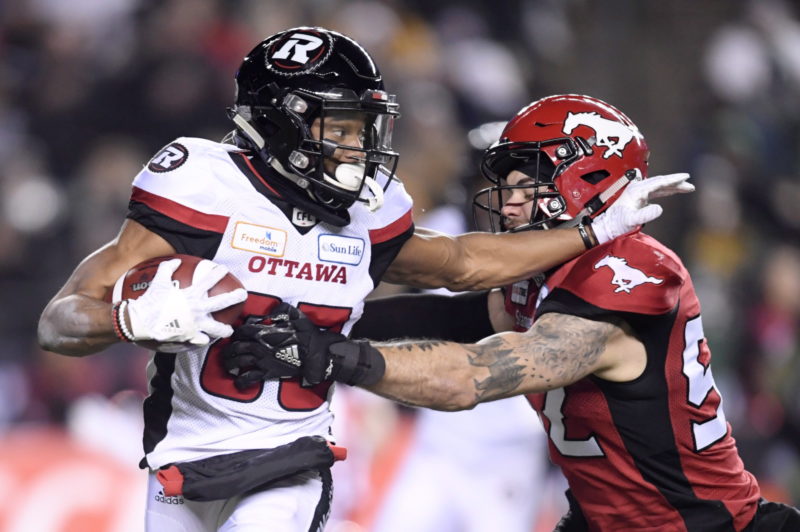 Jones, seen here in the 2018 Grey Cup, made a game-changing play on special teams that helped the Stamps’ secure their eighth-ever championship (Photo: The Canadian Press/Nathan Denette)

“I’m grateful to have spent my entire career wearing the horse and representing the city of Calgary,” said Jones.

“Thank you to everyone within the Stampeders organization for making the last four years a time I’ll never forget and thank you to the fans for always being the best in Canada.”

The UBC alumnus won a Vanier Cup title with the Thunderbirds in 2015. Upon his arrival in Calgary, he excelled on special teams, recording 28 special teams tackles during his professional career and also filling in as the team’s long snapper for one game. Jones also saw action on defence and recorded 14 tackles including two tackles for loss.

Jones delivered one of the key plays in the Stamps’ 2018 Grey Cup victory over the Ottawa REDBLACKS as he forced a fumble on an Ottawa punt return, leading to a Rene Paredes field goal that extended Calgary’s lead and helped secure the eighth championship in franchise history.

“Riley was an extremely hard worker who quietly and consistently contributed to our success during his time with the team,” said Stampeders president and general manager John Hufnagel.

“The players on cover teams rarely get much recognition but Riley’s big play in the 2018 Grey Cup was a rare and well-timed moment in the spotlight. I thank him for everything he has done for the organization and wish him the best in the next chapter of his life.”