VANCOUVER — Dave Dickenson is nothing if he’s not honest.

The Calgary Stampeders’ head coach admitted that during the first half of Saturday night’s game against the BC Lions, he yelled at his sideline personnel because no one got water on the field during a timeout.

He later found out you’re actually not allowed to do that during a timeout.

Dickenson said that the confusion stemmed from the absence of their longtime director of video operations, Ross Folan, who hit his head and was unable to travel with the team. Missing an integral behind the scenes person, things can get a little uncoordinated on the sideline.

He laughed at the whole scene looking back on it. The players were lined up wrong. There was confusion about where you can and cannot bring water. Then the play on the field wasn’t executed properly. Then TSN caught him asking everyone around him if anyone was working today.

“Ultimately I guess I’m just a hothead,” the coach joked.

RELATED
» Stamps cruise past Lions for third-straight win
» Through the Lens: Calgary at BC
» Boxscore: Stamps, Lions by the numbers
» Watch: Burnham’s great grab over defender sets up BC TD

The Stamps survived that, though and went on to roll to a 39-10 win over the Lions. It was as complete a win that you could hope for. Bo Levi Mitchell didn’t throw an interception for the first time this season. Calgary’s o-line didn’t give up a sack and its d-line got to Michael Reilly three times, while the defence took two interceptions from him (one for a touchdown), when he’d come into this game only throwing one this year. Roc Thomas had a kickoff return touchdown.

Missing a number of his most familiar targets, including Kamar Jorden (hamstring) and Josh Huff, who was a last-minute scratch because of food poisoning, Mitchell spread the ball around to a young cast of receivers.

“The best thing is it was a bunch of guys that nobody knows what their name is stepping up making plays,” he said.

It won’t stay that way if those players keep doing that.

Rookie Luther Hakunavanhu might be near the top of that list of players currently in anonymity. The Stamps’ fifth-round pick in the 2021 Draft, Hakunavanhu had three catches for 56 yards, the team’s first touchdown of the night and a recovery of a blocked punt. Saturday marked just his third game this season, after making his debut against Hamilton in Week 7 with four catches and 88 yards.

“Y’all can see me on the field,” Mitchell said, gesturing like he was pointing, “I’m pointing at Dave, like yo, just let him come in.”

Hakunavanhu is six-foot-four and 202 pounds. Against BC’s smaller defensive backs, Mitchell saw a mismatch that the rookie out of York University could exploit. 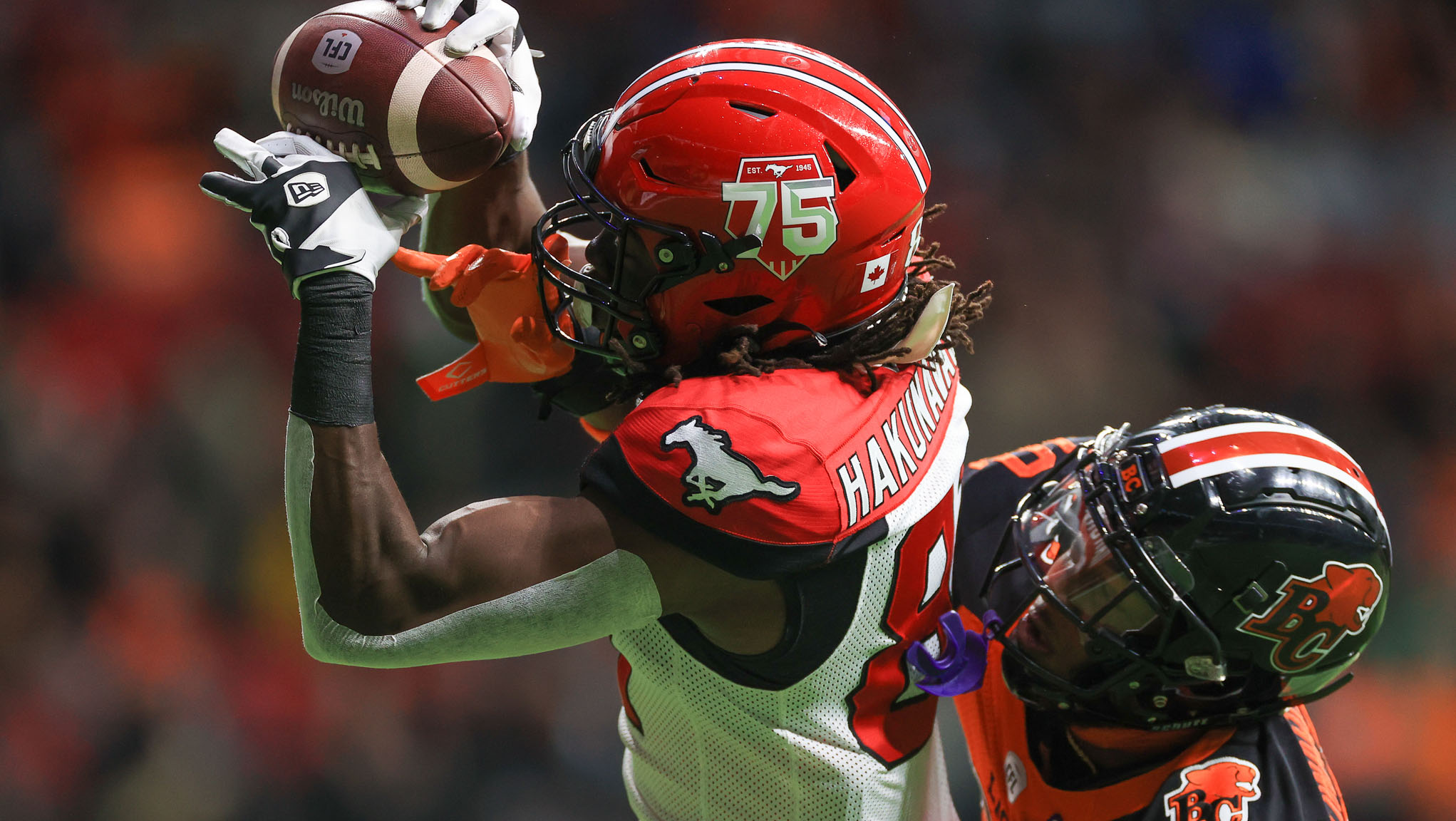 A fifth-round pick in the 2021 CFL Draft and a player that was originally listed as a regional combine participant, Hakunavanhu is showing he belongs in the CFL (Paul Yates/BCLions.com)

“Their DBs are outstanding,” Mitchell said. “They’re probably right there at the top of the league. My thing is the one downside to them is their size. T.J. (Lee), hell of a DB, my teammate in college but him, Marcus Sayles, they’re not the biggest guys in the world and their field guys aren’t either. When you have the opportunity to have a guy that to me can go make the plays, allow the guy to do that.

“He did a hell of a job. He did a great job. He didn’t seem frazzled at all. We’re starting to realize we’ve got a lot of weapons and we can use them in a lot of different ways. And I want to try to continue to get everyone involved. Luther’s play did not surprise me. The fun thing is he’s hungry for it. They’re all hungry to get the ball more and I’ll keep doing my best to be that point guard and get it to them.”

Normally a Canadian rookie receiver’s season is about patience, especially when you’re a late draft pick. Hakunavanhu is even more interesting because he came from the fringes of the draft. While the CFL didn’t hold in-person combines this year because of the pandemic, Hakunavanhu was listed as a regional combine participant. Unable to work him out or see him in one-on-ones, the Stamps looked at his film and made a decision.

“We saw some talent,” Dickenson said.

“We saw some a guy that could make plays but had a lot drops in college and we were really trying to figure out without seeing him live what’s the issue there? Is it more of a technique thing that we think we can work on or it is his hands? His hands but he has been great from Day 1.”

The first words out of Hakunavanhu’s mouth when he was asked about this season went to his receivers coach at York, former Edmonton Elk receiver Kamau Peterson, who he said got him CFL-ready.

“He’s always in my ear, someone I could talk to as the season goes on to keep my head down, make sure I’m ready. That way I don’t have to get ready for situations like this,” he said.

“Whether I’m on the PR, just keep my head down, keep playing fast. My chance will come and then make sure you execute when your opportunity’s given. So that’s just the mind state that I have and then just keep going from there.”