CALGARY — Dave Dickenson is one of the most competitive individuals in the Canadian Football League — that comes with the number of victories he’s accumulated as both a player and coach.

In the wake of the cancelled 2020 CFL season, the head coach of the Calgary Stampeders was able to pick up a different clipboard, as he coached his son’s youth football team. But his competitive nature still came out at times.

“One time, I complained to the ref, and I thought, ‘Ah man, I shouldn’t do that,’” Dickenson told Stampeders.com. “I told (the referee), ‘No one is here to watch you. So just keep the flags in your pocket and let the kids play.’ That was probably a little bit over the line there.” 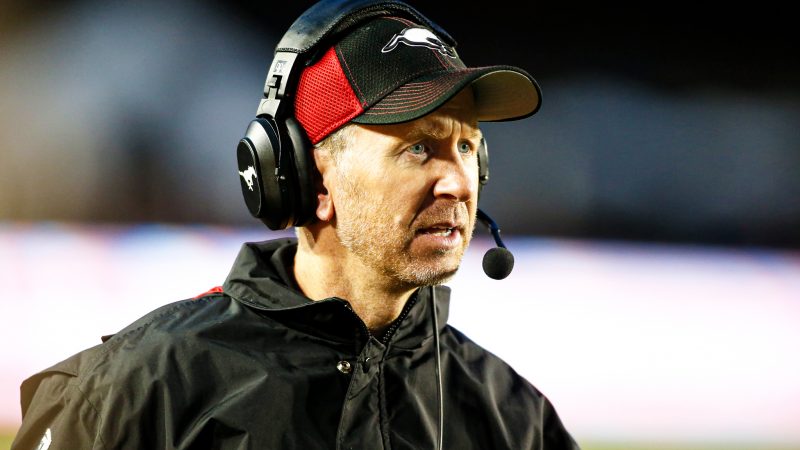 Dave Dickenson is ready to get back on the sidelines with the Calgary Stampeders in 2021. (Larry MacDougal/CFL.ca)

That time coaching the game allowed Dickenson to spend some added time with his family and gave him the chance to try out some more creative playcalling while having some fun with the game.

But he’s also ready to get back to work with his staff and the players on the Stampeders following a year-long layoff due to the COVID-19 pandemic. But Dickenson and the Calgary organization as a whole got some good news a week ago when the 2021 Canadian Football Hall-of-Fame class featured Nik Lewis, Will Johnson, and Doug Mitchell.

“I was able to text Nik this morning, just a quick congratulations. I got Will on Facebook, but I don’t use Facebook that much, so I had to figrue out my password and get on there,” Dickenson said.

Dickenson was inducted into the Canadian Football Hall of Fame back in 2015, and after suiting up alongside some of the all-time-great pivots, he’s also able to see the future Hall-of-Famers in the league today. He had the opportunity to work alongside the likes of Doug Flutie — in the NFL — along with Henry Burris and Jeff Garcia. His current pivot on the Stamps looks to be a surefire call to the hall, and he’s still got time to cement his case as one of the greatest CFL quarterbacks of all time.

“I think Bo is the most talented CFL quarterback I’ve played with,” Dickenson said. “I didn’t play with Doug Flutie in the CFL, but I would stack (Bo) up with the rest of them. I think Doug is one and you have to put Bo up there with the other greats. And he’s still got — in my opinion — three, four or five good years, so he could make a push. I just think that what he’s done up there is special and he just continues at this level of play.

“Bo’s numbers and what he’s done here are extremely rare and his winning percentages are off the charts.”

Mitchell, once again, will be a key piece to the Stamps’ success during the 2021 campaign.

Calgary has lost some key veterans during the off-season, including Eric Rogers, Cordarro Law, and Robertson Daniel. That adds to the departures of Reggie Begelton and Tre Roberson, who both secured opportunities in the NFL.

On May 4, they’ll be able to add some additional talent through the 2021 CFL Draft.

After Calgary brings up to six National players in — along with their 2020 class — the next step in the process will be training camp and the 2021 season.

Calgary has skewed younger for this upcoming season and will rely on veterans like star quarterback Mitchell to help lead the team to the playoffs once again and push for a title again in 2021.

With Saskatchewan pushing for another West Division title and Winnipeg coming off a Grey Cup victory in 2019, it’ll be another grind to the West Division crown this year.

Dickenson will be sure to have those matchups circled against the Roughriders, as he’ll be going head-to-head with brother Craig for the second year. The former special teams coordinator took over as the head coach for the Riders in 2019 and helped the team to their first West Division title since 2009.

“He was ready. I knew he could be a good head coach,” Dickenson said. “I was impressed with what Craig did in Saskatchewan. Obviously, they have a good team and a well-run team. I did enjoy beating them and last year, we were undefeated against them. If we could keep doing that, that would be great. But at some point, he’s going to have his way with us and I’ll have to shake his hand, tell him good job, and figure out a way to not let that happen the next time. But I’m proud of him. He’s just a good person and he waited his turn.”

As for the possibility of the Dickenson brothers joining forces one day down the road, that’s a little less certain — especially if they both continue to flourish with their respective sides.

“I’ve learned from the Sutters and some other brother combinations throughout the years that sometimes, it’s good to just do your own thing and then meet up for the holidays,” Dickenson said.

Despite the extended period away from the field, the competitive juices are still flowing for the Stamps boss. And he and his team will be raring to roll when this season gets going.