TORONTO — Benjamin St-Juste is one of many Canadian prospects to standout south of the border in the NCAA.

The Montreal, QC, native hasjust wrapped up competing in the annual Senior Bowl down in Mobile, Alabama, competing against some of the best prospects in the NCAA while being able to have the eyes of scouts on him for a week straight.

That was one of the many steps on the road to the CFL and NFL Drafts, respectively.

““The Senior Bowl week and the game helped me show that I’m a very good defensive back. I can tick all the boxes in the scouts evaluation grid,” St-Juste said on Thursday. ““If I go by the comments I received from scouts during my interviews, it helped me a lot because there was a bit of doubt considering that I only played five games in my last season.” 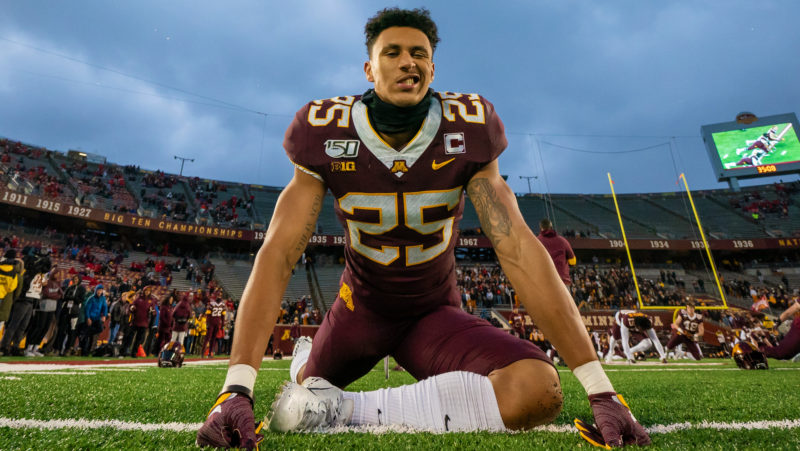 Defensive Back Benjamin St-Juste is one of the top players at his position in the latest CFL Scouting Bureau Rankings. (Minnesota Athletics)

Coming out of Cegep du Vieux Montréal, St-Juste was rated a four-star prospect and the top cornerback in Quebec. He opted to play his college ball at the University of Michigan. He played in his freshman year with the Wolverines, playing mainly on special teams while also making one appearance at cornerback.

But a year later, he redshirted and found himself entering the transfer portal by the end of the 2018 campaign. During his time at Michigan, he was able to finish his Bachelor’s degree, allowing him to be a graduate transfer — meaning he didn’t have to sit out a year before moving to his new program.

He was able to make the quick transition and chose the University of Minnesota as his landing spot. Along with starring for the football team, St-Juste was also able to finish up his Masters in Sport Management.

“(It took) a lot of patience and a lot of hard work,” St-Juste said about the educational journey. “In my head, I always told myself that if I get a serious injury or something happens where I can’t play football, how can I maximize the opportunity? How can I go home and not just say, ‘I wasted all this time to just bank on football and it didn’t work out.’ So every day, I try to put as much effort into my school stuff and football stuff. At Michigan, it didn’t work out because I got injured my second year, but I wanted to leave with my diploma.

In his first season with the Golden Gophers, St-Juste appeared in all 13 games and started nine of those contests. He finished the year with 45 tackles, 1.5 tackles for loss, and was tied for the team-high in pass breakups with 10. That earned him All-Big Ten Honourable Mention.

Because of the COVID-19 pandemic, two of Minnesota’s games were cancelled. Despite that, St-Juste appeared in five of the seven contests the team played, making 14 tackles while breaking up three passes.

St-Juste was named Academic All-Big Ten for his efforts in the classroom this past year.

Standing at 6-foot-3, 205 pounds, St-Juste has a unique frame for a defensive back and that elite size is something that teams love to see out of an individual with his athleticism and tools.

During the Senior Bowl, he was a part of the National Team roster for the event, and the team was coached by the Miami Dolphins staff, including head coach Brian Flores.

He made sure to pick the brains of the staff to get the most of of his experience at the showcase.

“It was great. From understanding how to take notes in meetings to being a professional, showing up earlier than the other guys to show that you’re serious and sitting in the front row, being involved in different positions and playing special teams. All those things are going to keep you in the league,” St-Juste said. “It’s one thing to make it and get drafted and go to a team but it’s another thing to stay in the league for a number of years until you get that second contract.

“I was just talking to my position coach, he was giving me a lot of advice on how to play a different style of game. The Miami Dolphins are an aggressive defence, they want to get interceptions and production and forced fumbles. So we were talking new techniques as defensive backs to not play soft or scared. When the ball is in the air, you turn around and automatically look for the ball and try to get the interception. That’s why we had a lot of PBUs and interceptions in the (Senior Bowl) game because that’s the way the Miami Dolphins so there were some great tips and advice.” 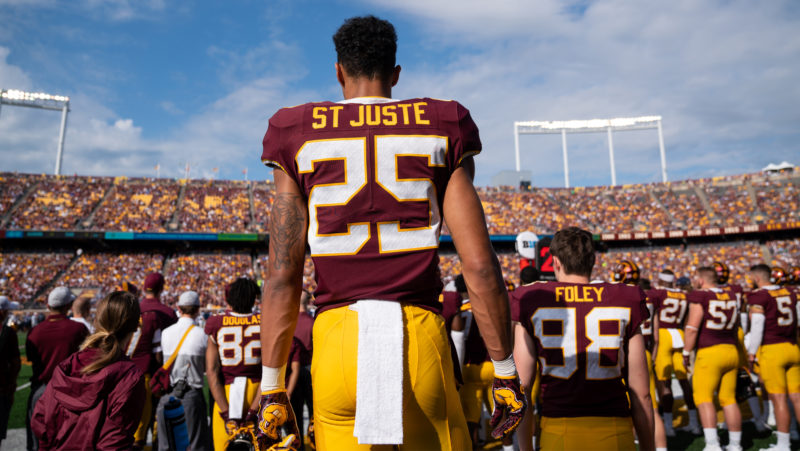 Benjamin St-Just has been invited to the NFL Combine following his strong performance at the Senior Bowl. (Minnesota Athletics)

With his effort shown during the week, St-Juste earned an invite to the 2021 NFL Combine, and while the on-field assessment will be conducted at Minnesota’s pro day, he’ll still have a heightened amount of exposure through one of the trademark events of the off-season.

He’s currently ranked as the 11th-best prospect on the CFL Scouting Bureau Winter Rankings and the second-best defensive back.

He’s dreamed of being a professional football player his whole life, and in a few month’s time, he’ll have the chance to be taken in both the NFL and CFL Drafts. But despite the hype surrounding his abilities heading into draft day, he’s staying grounded and taking the process one day at a time.

“I’ve got more work to do, more training to do, and I’ve got to do all those days of training and my pro day,” St-Juste said. “Once the day happens, I’ll take a couple of days just to let that sit and understand how far I’ve come and the trials and tribulations I had. But after that, it’s right back to work, trying to achieve more goals and bigger things ahead.”