It has been a few years since he dusted off the Superman cape, but number 81 Geroy Simon is still very much a big part of the BC Lions operation. Having transitioned in his scouting role to overseeing the large crop of international players eligible for the Global Draft, Simon remains busy watching film and the weekly slate of college and NFL games as he and the rest of the brass now prepare for putting the best possible team on the field for 2021.

The man known as Superman joined host Matt Baker on episode 35 of 1st and Now. Even after the 2020 Global Draft was cancelled, the days remain busy for Simon with more game film now at his disposal.

“As a scout, even though our season is cancelled I continue to try to find creative ways to do some work,” Superman explained.

“I’m in constant contact with all of my contacts in the US. Any game that’s on, I’m pretty much watching it and jotting down names of guys who flash and show that they might have the potential to play at the next level. You have to do the best you can with what you’ve got and that’s what we have right now: the opportunity to watch on TV, make the calls from home, email correspondence and things like that. We’re still staying busy, still trying to get as much football in as possible, but it’s just a little challenging these days.”

RELATED
» All-Decade Team: Vote now on the best coach of the decade
» Catch up on the first four episodes of Remote Reunion
» The Waggle: The first last of the Grey Cup, Dayna Spiring

In addition to scouting the Globals, Geroy is still very hands-on in helping GM Ed Hervey, Director of Player Personnel Torey Hunter and all of the US regional scouts finding those hidden gems south of the border.

Other topics hit on in episode 35 included Geroy’s induction to the Greater Johnstown High School Ring of Honour. He spoke very highly of his time as an athlete in high school plus all of the other great athletes that came through Johnstown, Pennsylvania.

Growing up one hour from Pittsburgh also meant Superman had eyes on his Pittsburgh Steelers’ big win over the New York Giants in week one of NFL action. It was extra special for Geroy to see Abbotsford’s Chase Claypool make an impact in his pro debut.

“I was really excited. I’ve known Chase for quite a long time, from the time he was in grade eight or nine,” explained Simon.

“You just watch the development of the kid. When I first met him, he wasn’t 6’4′” or had run a 4.3. He was a young developing player. And then you watch him when he was in high school at Abbotsford and you see that he played well and then playing at Notre Dame. Now seeing him in the pros is very exciting. It shows that the talent level is everywhere. The talent level in Canadians is very high and if given the opportunity, those guys can go quite a long ways. So I was really excited.” 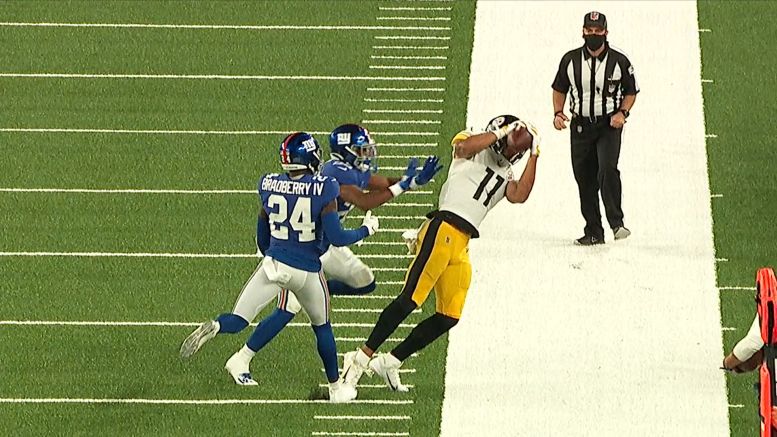 And as a star who played a huge role in two Grey Cup victories with the Lions, we also got Simon’s thoughts on the CFL’s Grey Cup Fan Base initiative where fans can etch their names onto a new cool piece of Canadian Football history.

“It’s so cool. Just the history behind the Grey Cup and all of the great names that are on it as players, to have your name etched on it (base) as fans, is really cool,” Superman said.

“I think it’s a great initiative and it’s something that’s going to last forever.”

He now can’t wait for the day he wins his first as a member of football operations. All of the hard work being down now is certainly bound to pay dividends once the Lions get back to the gridiron.