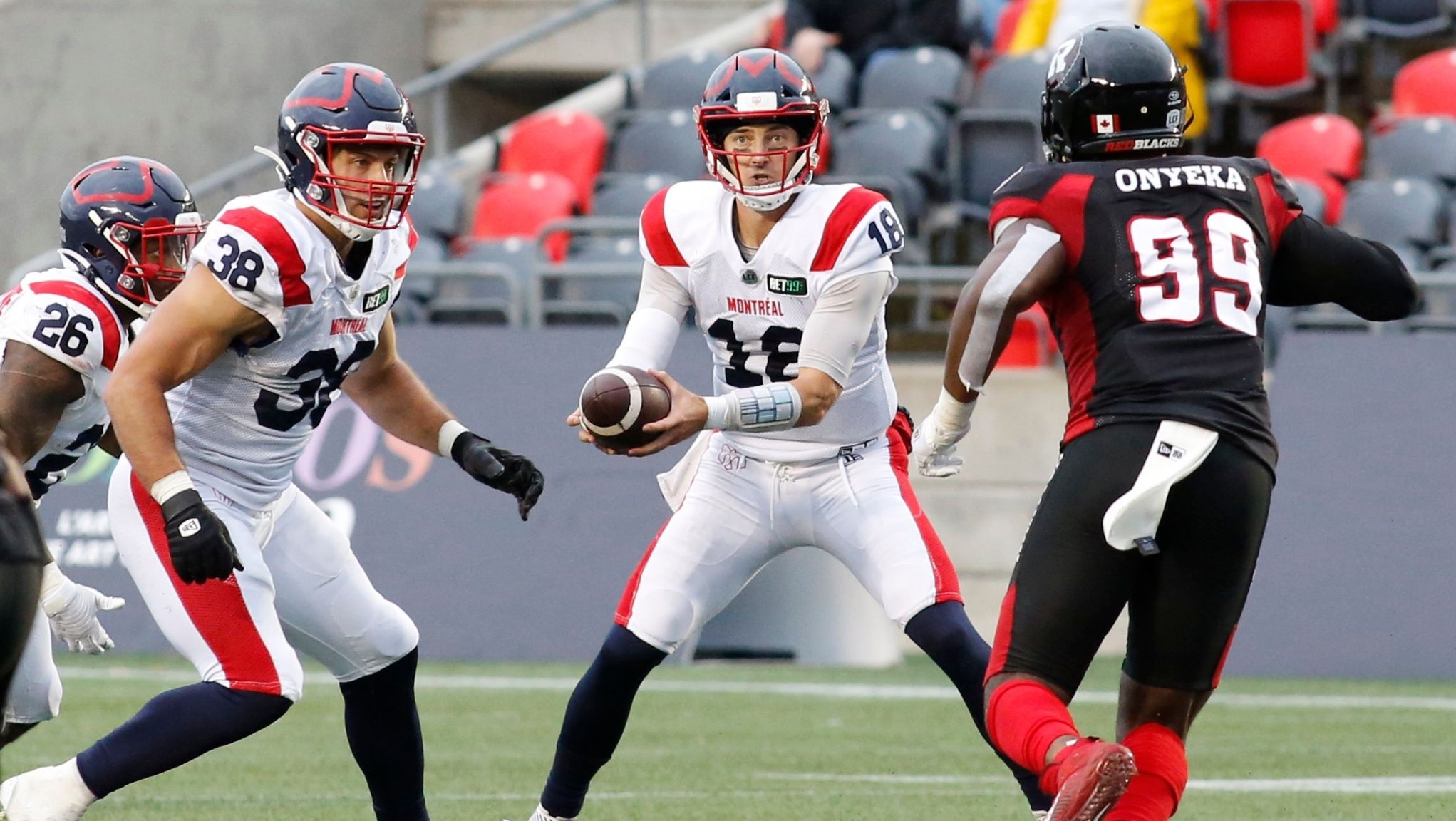 OTTAWA —  It was a memorable day for Matthew Shiltz as he lifted the Montreal Alouettes over the Ottawa REDBLACKS in his first start of the season.

After Vernon Adams was injured in last week’s matchup between the two teams, Shiltz was thrust into action and helped engineer a game-winning drive that was capped off by Cameron Artis-Payne‘s go-ahead touchdown. Following the game, it was announced that Adams would end up on the six-game injured list, placing the keys to the Alouettes’ offence in Shiltz’s hands.

RELATED
» Shiltz leads Als past REDBLACKS
» Through the Lens: Montreal at Ottawa
» Boxscore: Als, REDBLACKS by the numbers
» Watch: ‘TD Jake’ fights through double coverage for the 50-yard strike

After going undrafted coming out of Butler University where he graduated with a double major in Accounting and Management Information Systems while throwing for 2,713 yards and 19 touchdowns, Shiltz left football.

With no offers in to play in front of him, he began working for the Indianapolis-based Ernst & Young when he was invited by Alouettes to their winter mini-camp and was later signed to the team’s roster.

Since joining the team in 2017, Shiltz has appeared in 48 games for the Alouettes. But Saturday was his first start since 2019 where he threw for 177 yards and a touchdown in the Als’ Week 16 loss to the BC Lions. Having had to wait all that time in between starts made the experience and the win all the more special for Shiltz.

“It was worth the wait,” said Shiltz to the media. “Time makes it sweeter, especially in situations like this and for whatever reason, it wasn’t my time the last four years. Whatever individual moment where it could have worked out and it didn’t, just staying positive through the peaks and the valleys and you try not to get too high, try not to get too low and that’s the kind of mentality I try to keep on the football field.”

Positivity and calmness were the keys for Shiltz and the Alouette’s offence as their opening drive was precise and calculated. Though Jake Wieneke dropped what could have been a touchdown in the back of the endzone during that drive, Shiltz would connect with him later for a 50-yard touchdown.

“I saw Jake take an angle there and gave him a chance,” said Shiltz. “He’s a great playmaker, a big body and he’s going to come up with that ball more often than not.”

Shiltz found the endzone not only through the air but also on the ground as his rushing touchdown gave the Als a 10-0 lead early in the first quarter.

“The touchdown run was awesome,” said Shiltz. “We got a good look, we got some big, heavy personnel in there and got the edge and got into the end zone.”

Following the game and the celebration, Shiltz was flooded with different feelings, but couldn’t settle one to describe what he felt.

“Honestly, I was kind of searching for the right emotion coming off the football field,” said Shiltz. “It was four years, it was so many people that helped me along the way whether it was people in the organization that kept me here…I’m just so grateful, to be honest. That’s the one word that keeps coming back; for the team, my teammates, the organization, coach Kahari (Jones) and the ones that believed in me.”

While Shiltz played a monumental role in the Als’ win, he praised the play of his defence who recorded 10 sacks on the day and held Ottawa to 258 yards.

“I give them so much credit,” said Shiltz. “They really won that game, the second half for us. They played well and we’re going to have to clean up some stuff moving forward.”

With the first win under his belt, Shiltz feels confident in his and the Als’ abilities going forward against the East Division-leading Toronto Argonauts next week.

“It’s always nice to get that first win, especially against a good team,” said Shiltz. “They’re well-coached, they were flying around, just being able to beat a team twice in a row is great. I’m proud of the way those guys played and now we got a big week coming up against Toronto. It’s time to go, we’re ready.”

Next up for the Als will be a game at home against the Toronto Argonauts at 7:30 p.m. ET for Friday Night Football.