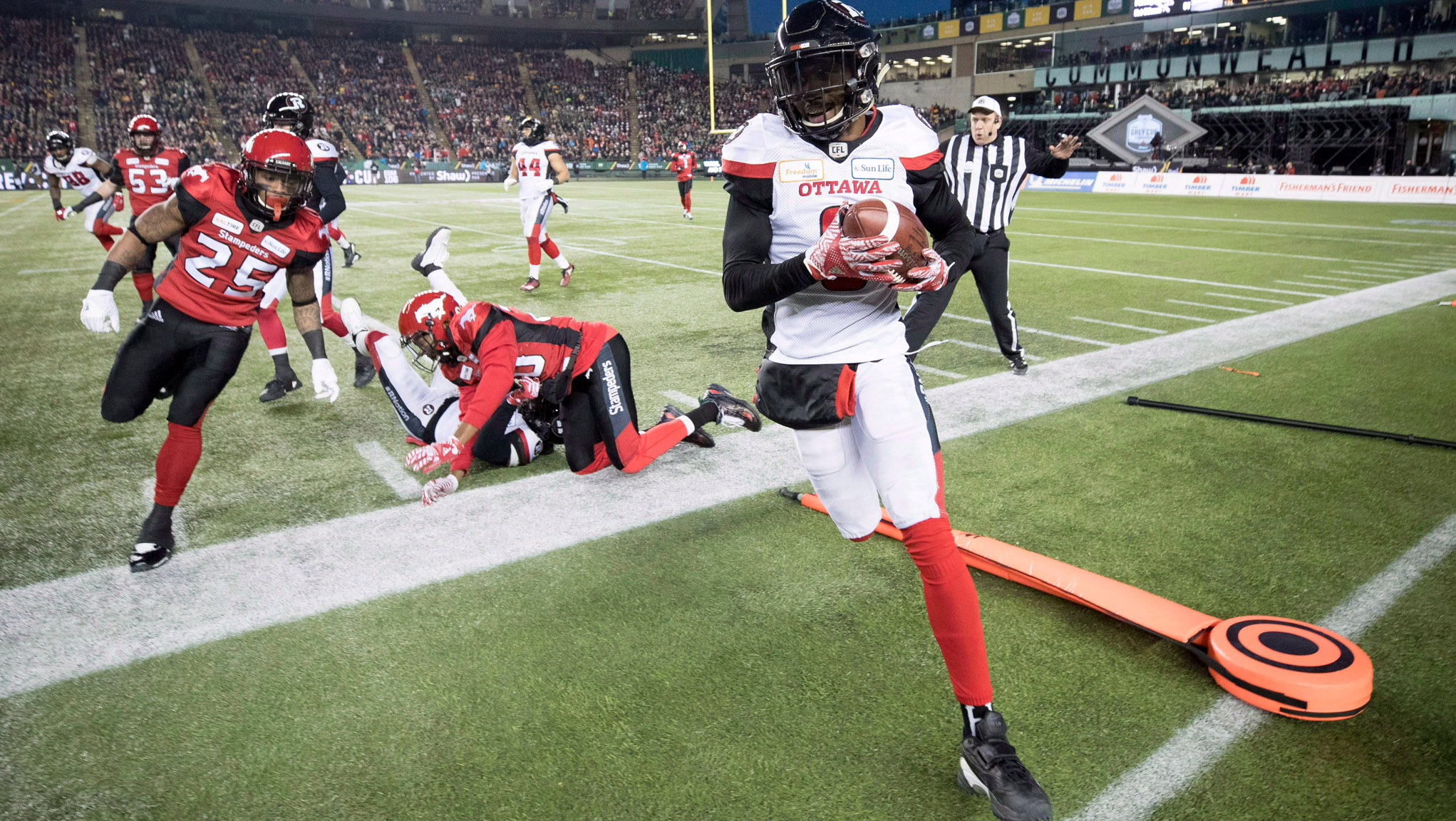 Jonathan Rose comes to Edmonton with plenty of opportunity at cornerback (Photo: The Canadian Press)

In a simpler time, this would be when you’d want to sidle up to Brock Sunderland.

If things like social distancing and COVID protocols weren’t obstacles, you’d want to meet the Edmonton Elks’ GM in his office at Commonwealth Stadium on the morning of July 10, when training camps open. He could take you through the roster he’s no doubt drawn up on a whiteboard or an iPad and tell you the hows and whys of its construction. As the players begin to trickle out of the locker room and onto the field, you could walk with the GM down to the sidelines to watch the roster start to take shape in front of him.

Sunderland wouldn’t lie to you about where the fireworks are with this team. His offence is loaded, with Trevor Harris given the tools to chase an MOP award. On a media call last week, Sunderland was asked what he was most excited about with this roster. He compared the question to a parent being asked to choose their favourite child, but admitted the offence he and his staff have assembled is a special one. That’s a conversation for another post, though.

After he mentioned the offence, like a smart/proud father would, he started talking about the rest of his kids.

“I think we’ve revamped the secondary and improved immensely,” he said.

“They’re the one area that’s going to be very exciting to see at training camp because it’s going to be highly competitive, as is the linebacker situation.”

Improvements to the secondary were a must after the 2019 season. The Elks were seventh in pass knockdowns (42) and tied for last in turnovers forced (32 with BC). They were eighth in interceptions, with 15, just three ahead of last-place Ottawa. In spite of that, the Elks finished 8-10 and crossed over to the East playoffs, where they knocked off a tough Montreal squad before falling to a Ticats team that won every game it played at Tim Hortons Field.

So over the last two off-seasons, Sunderland has reshaped that secondary. It starts with Jonathan Rose coming over from Ottawa to play cornerback. The 27-year-old spent the past four seasons with the REDBLACKS and has nine career interceptions, with five of them coming in 2018. A two-time East all-star, he’ll get a chance to shine in Edmonton.

Next to him at halfback, Edmonton fans will have no problem cheering for Aaron Grymes, who returns to the city that he’d spent the prior five seasons with, after jumping to the Lions in 2019. Grymes was an integral part of Edmonton’s Grey Cup-winning defence in 2015 and brings 12 career interceptions with 235 tackles.

Sunderland inked then-free agent Jermaine Gabriel away from the Argos in 2020 to play safety and stuck with Double Blue DBs when he signed Jonathan Mincy and Trumaine Washington, who should both play halfback. At cornerback, Forrest Hightower’s retirement last week could create an opportunity for Robert Priester. The 27-year-old spent 2019 on the Elks’ practice roster and did the same with Winnipeg in 2018.

While people heap attention on the offence, Sunderland feels good about what’s been built in the backfield.

“I think on paper, if you look at the secondary, that’s where you would immediately go to,” he said of his most improved area of the roster.

“It’ll evolve and it’ll play itself out. It’s always hard, there always seems to be a player, some position groups that either catch you off guard a little bit by how well they come in. And again, we’ve been 18 months since we’ve seen some of these players, so I think there’s a lot of unknowns going into the season. Until we get out there and actually see these players, that’s a hard question to answer. But I think on paper, it would be the secondary (that’s most improved) for sure.”

As Sunderland also mentioned, the linebacking jobs should be a good competition. Vontae Diggs has shown what he’s capable of at will linebacker and will look to improve on a strong rookie season in 2019. The other two starting spots could be a battle. Kevin Brown comes in from Ottawa as the favourite to start at middle linebacker and Brian Walker is a candidate to slide down from halfback to play the sam spot. 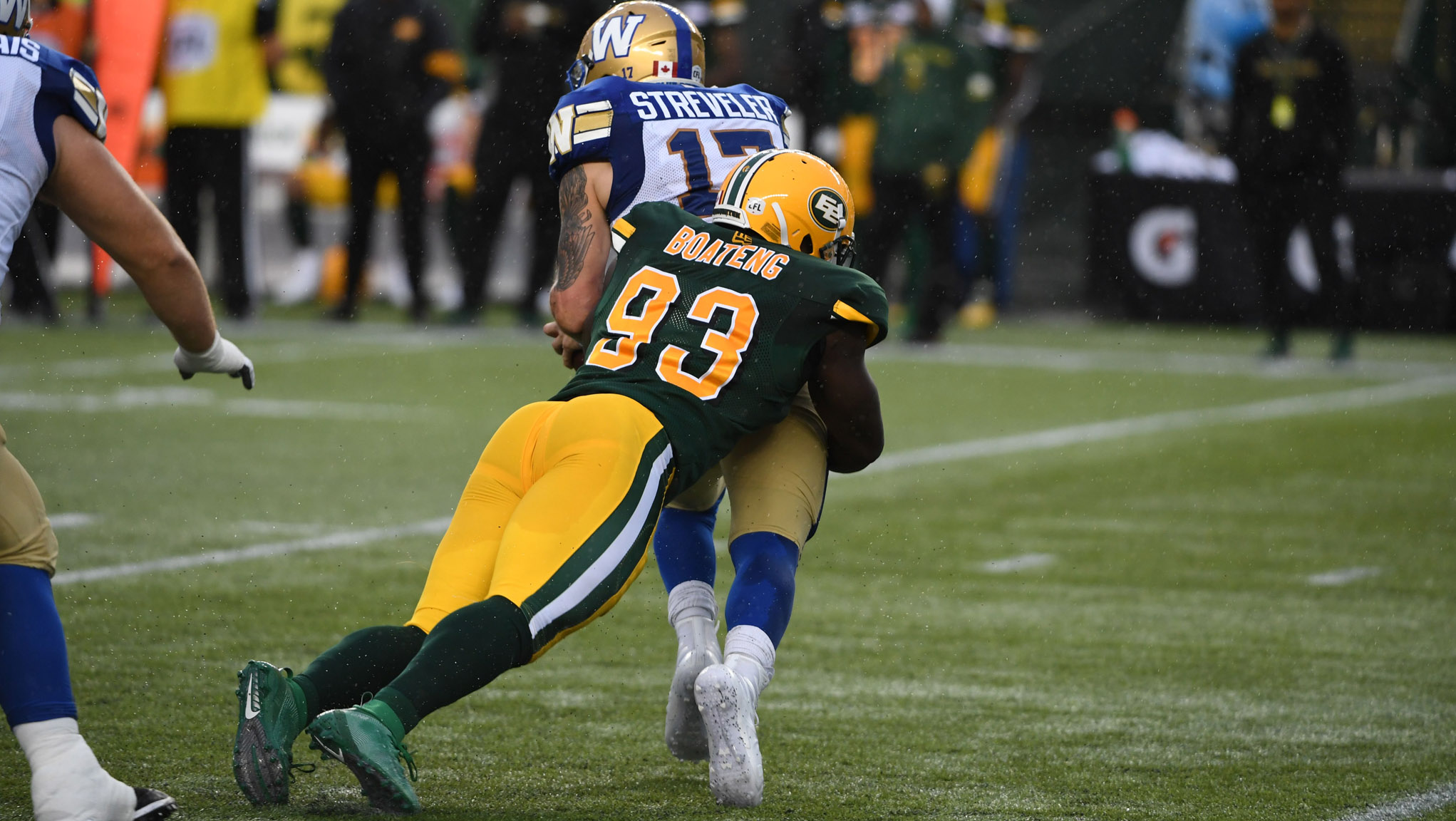 Kwaku Boateng heads into his fourth CFL season looking to take the next step in his development at defensive end (Dale MacMillan/GoElks.com)

Then we get to the stars of the defensive show. The Elks’ d-line has been a talented and productive one over the last few years and while there’s been some substantial change — longtime defensive tackle Almondo Sewell signed as a free agent with Montreal over the winter — the line should continue to evolve.

It could be led by Kwaku Boateng. The 26-year-old out of Wilfrid Laurier had 20 tackles and eight sacks in 2019, after posting nine in 2018. Heading into his fourth season, Boateng could take a leap and establish himself as an elite defensive end in the league. On the opposite end of the line, Shawn Lemon will try to out-perform everyone. Lemon was unrattled through trades from Toronto to BC in back-to-back seasons. He had 11 sacks in 2018 and nine in 2019, letting his moves West become opportunities to shine. He’ll hope to do that for his second go-round in Edmonton, where he spent the 2012 season and had six sacks and a forced fumble in 12 games.

Part of Edmonton’s decision to let Sewell explore free agency came from the production of its two interior d-linemen, even if those seasons came a year apart. Mike Moore played alongside Sewell last year and had a career-best nine sacks, along with 23 tackles. Getting Jake Ceresna back from the NFL certainly helped Sunderland’s decision as well. Just 26, Ceresna had 32 tackles, eight sacks and a forced fumble in 2018 with Edmonton.

The Elks tied Saskatchewan for the sack lead (58 total) in 2019. Despite losing Sewell, the line should still be a force in 2021. Sunderland, head coach Jaime Elizondo and assistant head coach/defensive coordinator/defensive backs coach Noel Thorpe will have a lot of names to evaluate at d-line through camp, but the key pieces are in place for them at the start of the season. Others to keep an eye on include Canadians Mathieu Betts and Alain Pae, who could be strong depth pieces this year and development pieces for the future of that d-line.

We should have a good understanding of what the d-line will be capable of. If the secondary is rebuilt the way that Sunderland hopes, the Elks’ defence could take a step forward this year, which would help Edmonton establish itself in a West Division that’s full of contenders.