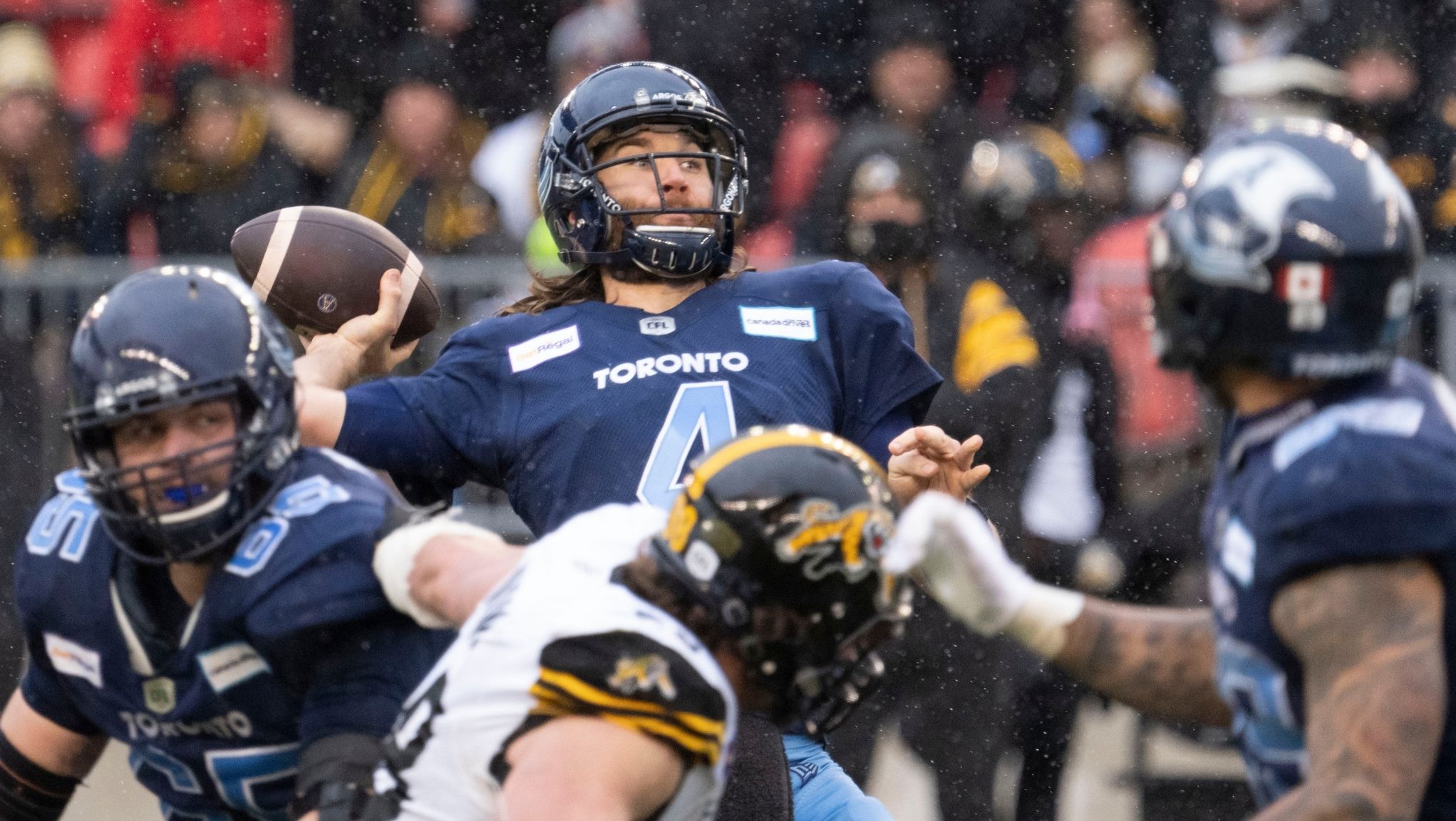 TORONTO — Following their elimination by the Hamilton Tiger-Cats, the Toronto Argonauts were left thinking retrospectively about the first half of the Eastern Final.

After building a 12-0 lead that the Argos took into the locker room at the end of the first, it was all Ticats in the second. Being outscored 27-7 in the remaining frames, Hamilton punched their ticket to their second-straight Grey Cup appearance while sending the Argos home in the process.

Of the many post-game conversations that the Argos had with the media, their decision to opt for field goals on third-down instead of attempting to convert was one of the major topics Ryan Dinwiddie discussed.

“I thought we were on the two-yard line so I was going to go for it,” he said. “And then Markus (Howell) said from up top, ‘No no, we’re on the three,’ So I was like, ‘I don’t know if I can get it,’ I had a quarterback run that I felt good about. I went for it down there a few different times this year, for whatever reason we just didn’t do a good job in the red zone. Unfortunately, that was our Achillies Heel this year and it came back to cost us big time in this game.”

While the Argos were in control of the game offensively and defensively for the first half of the game, it was the other phase of special teams that allowed Hamilton to get back into the game. It started with Papi White‘s 92-yard punt-return touchdown that lit the fuse for the impending Ticats’ come back. Following White’s contribution, the Ticats went on to score another touchdown which saw the Argos’ lead be wiped away.

“We didn’t take advantage of our opportunities, said Dinwiddie. “We had an opportunity to go up early, we dominated the first quarter – we had some long drives just didn’t score touchdowns – we had another opportunity for Shaq (Richardson) to hold onto the football- at least we get three there. They come out and then they get the punt return; both times we lost to them this year they’ve had a punt return for a touchdown. They took advantage of us on special teams with the return and they went for it on third-and-three and got the sneak. We talked about it all week that as soon as they get to the 45 and it’s too long for a field goal, they’re going to have a fake and we didn’t execute.”

Given the history both these teams have had this season and the chance to play in a home Grey Cup, Dinwiddie was not all too surprised by the emotion Hamilton played with.

“They had a chip on their shoulder going into this one and they wanted to send us home on our home turf,” he said. We talked about it all week, they feel like they’ve got us right where they want us and we try to say, ‘Well, we’re going to give them want,’ They beat us today; they deserve a chance to go to the Grey Cup. They won and beat us on our home field.”

Though the Argos’ offence didn’t find the end zone, Dinwiddie spoke highly of McLeod Bethel-Thompson who threw for 283 yards.

“I think he played pretty darn good today,” said Dinwiddie. “Guys didn’t really make plays for him, he gave some guys some opportunities. It’s still his first season in the offence, he didn’t get the full season. I think he’s growing and there’s a lot we’ve got to go work at. He’ll be working at it in the offseason, I know it. He’s a tough person mentally, but he’ll work hard but now it’s something we can use examples of in the film. I was very proud of McLeod’s performance today.”

On the defensive side of the ball, Henoc Muamba, who finished the game with a team-high seven tackles and a fumble recovery, had a simple answer for the Ticats’ comeback in the second half led by Dane Evans.

“We didn’t have an answer for what they were doing,” said Muamba. “Defensively speaking, we knew we had them where we wanted them but they came out with a completely different gameplan when they switched quarterbacks.”

“It wasn’t so much Dane, he’s a good quarterback, but I’ll give coach Tommy (Condell) a lot of credit. When we went plus-one, when we went zero, when we brought the pressure, he started to think. There were three plays that put us in the hole and again, it was just small details that we didn’t execute and that cost us.”