Although the tentative training camp start date of May 15 remains up in the air, your BC Lions are doing their part to stay sharp for when they can collectively take the field again. Nathan Rourke, the Victoria-born quarterback who was selected in round two of the 2020 CFL draft has been in Vancouver since December living with his parents.

Rourke, who will turn 23 this May, still awaits his CFL debut because of the season cancellation in 2020. He’s been lacing up every Monday to Thursday morning at the BC Lions facility for his daily workout.

“I think it was just tough for me in that regard because I had gone 17 years without missing a season of football,” Rourke said.

“For some guys, football is where they rely on income. I’m kind of in a good situation right now, as a young guy that still has the luxury of living with my parents. But some guys don’t have that, they have to find other jobs and sources of income.”

The former Ohio University standout led the Bobcats to three straight Bowl victories from 2017-2019. Rourke exited Ohio with a record of 24-13 at starting quarterback, threw for 60 touchdowns and put up a total of 7,457 career passing yards. But as Rourke mentioned several times since he was drafted as a Leo, he’ll be taking notes from Mike Reilly and focusing on elevating his game.

“I’m going to be learning so much more from him on the field. The knowledge of the game, coverages, the ins and outs of the offence are extremely valuable to learn from,” Rourke said.

RELATED
» The Way Too Early Power Rankings are in
» O’Leary: Canadian Football loses a giant in Chris Schultz
» Steinberg’s MMQB: Meet the woman behind CFL.ca
» Which CFL records could live forever? 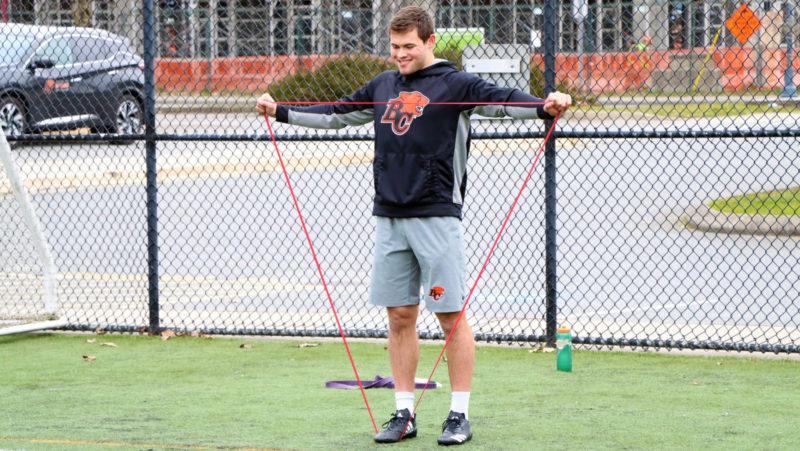 Quarterback Nathan Rourke is getting prepared for his rookie season in the CFL after being selected by the BC Lions in the 2020 CFL Draft. (BCLions.com)

Last month, the BC Lions hosted a virtual town hall via Zoom to answer questions regarding the 2021 season. Head coach & Co-GM Rick Campbell is more than just pleased with the current group of quarterbacks heading into the training camp. With Reilly at the helm, the squad also has 27-year-old Will Arndt who was previously with Campbell as a member of the Ottawa REDBLACKS and started three games late in the 2019 campaign.

“The good news is, he knows our terminology and he knows a whole chunk of the offence as far as how we call routes and how we call things,” said Campbell of Arndt’s CFL potential. “That’s going to be a big help for him coming in and I think the guy’s got something where he can grow and challenge to try to be a productive starter in this league so that remains to be seen. And I think Will would tell you the same thing but I know he’s a hungry guy that is going to give it a good run.”

Both Campbell and Reilly expressed positive outlooks so far from working with their fellow quarterbacks and offensive coordinator Jordan Maksymic. Reilly described Arndt and Rourke as ‘smart’ players who are also capable to take the snaps. And Campbell will anticipate how the two younger quarterbacks can grow from Reilly.

“I just think it’s going to be an exciting group. So the young crew hanging out with the old man here, I think they’ll rub off on him pretty well,” Campbell added.

The BC Lions facility re-opened in mid-February to limited employees and players who have stayed local throughout the last year to prepare for the upcoming season. Some of those local players such as Lemar Durant, Sukh Chungh, Jamel Lyles and Rourke are holding regular, socially distant workouts inside the gym and on the practice field.

Rourke said his number one goal this year is to contribute to the team in any possible way. Like everyone else, he’s lacking the practice reps at the moment, which he would have wanted because those reps could help him process the game faster and making better reads on offence. But he makes up for that by improving his throwing mechanics and footwork on his own time.

“I can only control what I can control,” he added.

“The weird thing about this past year was that as a college athlete, you had a set schedule and everything was routine-oriented based on what time of the year it was. I think it’s been good because I had to learn to become a professional and how to take care of myself to make my own routine. Coming back to the Lions and have daily workouts has been really good as well. But I’m just looking forward to getting into the routine of the season and be able to play football.”

And to remain physically in shape is essential for any football player. Rourke is leaving his college days behind and starting a new chapter in British Columbia.