CFL.ca presents ‘Off-Season Depth Chart’, a series of articles reviewing every team’s depth chart at is stands to date. Note that these are not official team-issued depth charts, but projections based on insight and analysis from around the league.

TORONTO — With new faces on all three sides of the ball, and behind the bench, the Toronto Argonauts are poised to look much different than they did the last time they hit the field.

This off-season the Argonauts made a splash that could be felt all across the country. It was clear that the team from 2019 was not good enough for general manager Michael ‘Pinball’ Clemons after finishing 4-14. The top priority appeared to be playmakers during free agency, as Toronto locked in eight of CFL.ca’s top 30 pending free agents (including five of the top nine) back in February.

Plus, a trade at the quarterback position meant the Argos are moving forward with an up-and-coming star to steer the ship. 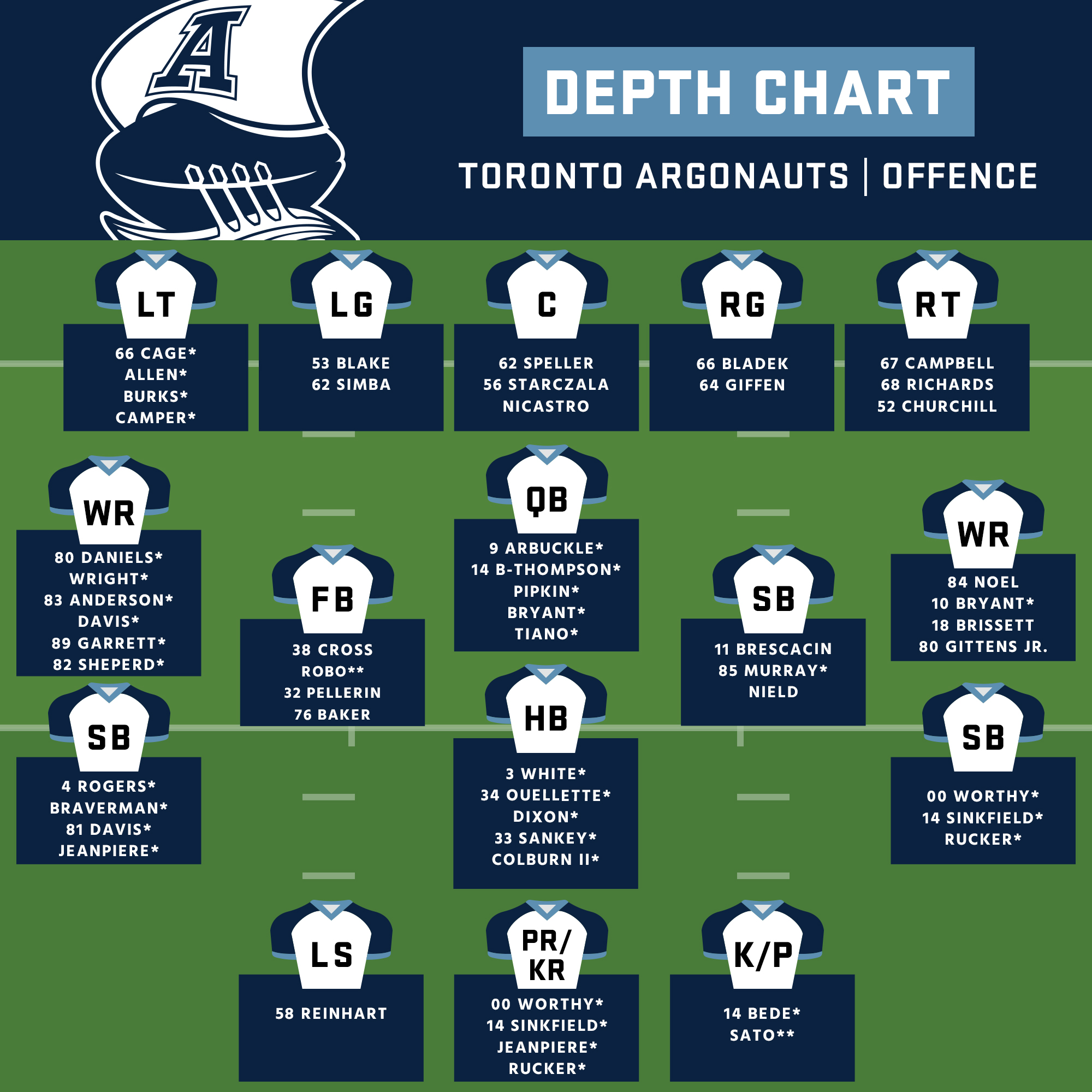 Almost exactly a year after signing Matt Nichols, Toronto decided to go a different direction. They released Nichols in February and immediately signed Nick Arbuckle, who was let go from the Ottawa REDBLACKS earlier that same day.

Even though the Boatmen signed McLeod Bethel-Thompson last week, Arbuckle appears to be the front runner for the starting job in Toronto. He’ll be looking to prove that he is worthy of being the No. 1 option, since he has yet to play an entire season in that position. But if history is any indication and if he continues to play at the level he did in his seven starts in Calgary, things are already looking up for the Double Blue.

Arbuckle won four of those seven games and completed 73 per cent of his passes for 2,103 yards and 11 touchdowns. The six-foot-one, 214-pounder also added another four majors on the ground.

Bethel-Thompson adds a great complement to the QB room after leading the CFL in touchdown passes with 26 in just 13 starts while also completing 4,024 yards. Nine of those games he had at least 300 yards passing and two were over 400.

Toronto’s receiving corps looks dangerous with the additions of DaVaris Daniels and Eric Rogers. The Argos also have some Canadian pass-catchers including Juwan Brescacin who will provide some ratio relief, along with 2020 CFL Draft Pick Dejon Brissett and Kurleigh Gittens Jr. backing him up. Another Canadian, Llevi Noel, could see a starting role at field side wide receiver, although there is an opportunity for competition in camp between him and some of the newer Americans like Martavis Bryant.

John White looks like the front runner to carry the rock this season for Toronto. He signed with the Boatmen as a free agent earlier this off-season following his first-ever 1,000-yard season in BC.

With plenty of Canadian offensive linemen on the roster, Toronto could go with four Nationals in the trenches. Cody Speller looks like a shoe-in to start at centre while Dariusz Bladek and Philip Blake round out the guards and Jamal Campbell likely to assume the spot at right tackle. 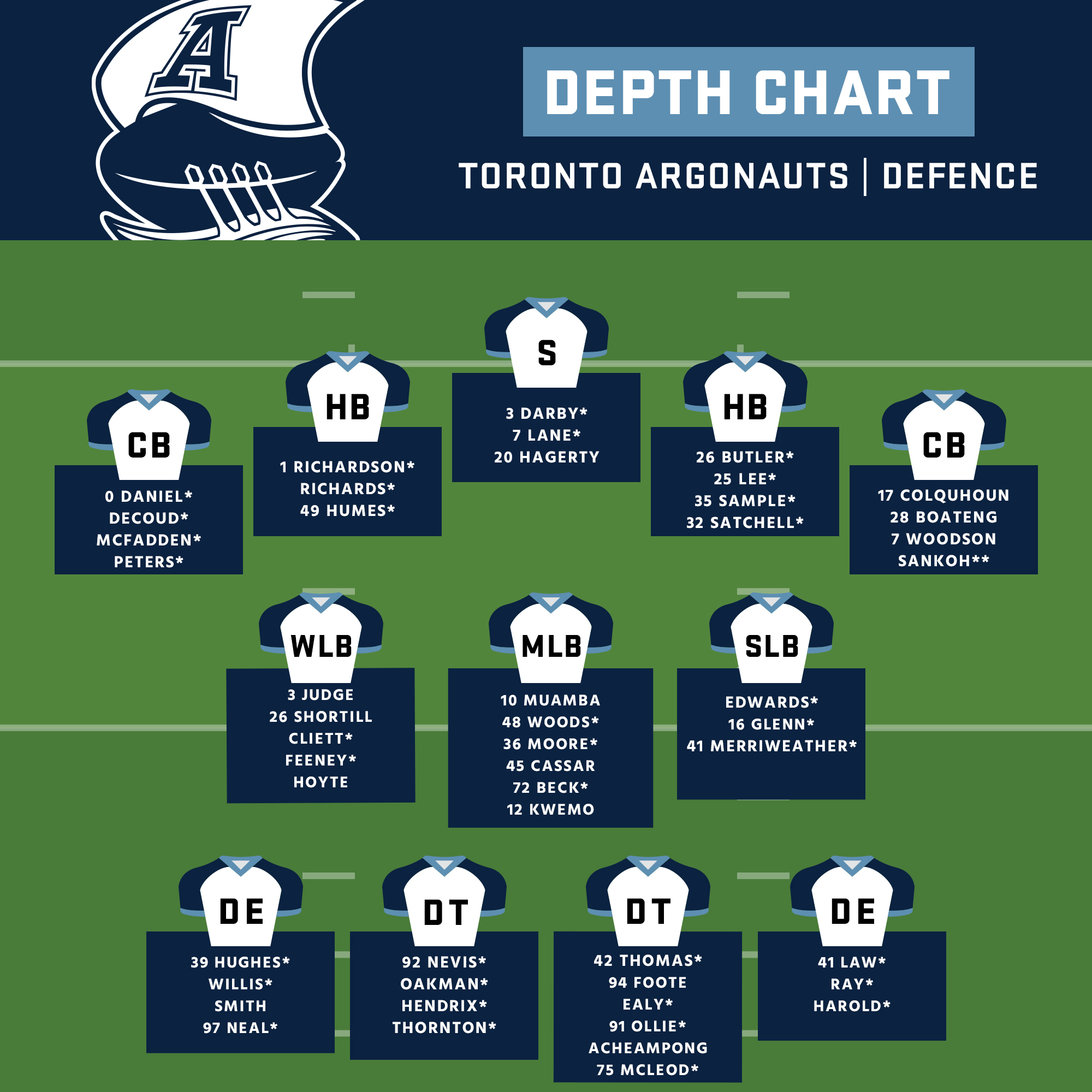 On the defensive side of the ball, the Argos now have two of the best Canadians to roam the middle of defences. 2019’s Most Outstanding Canadian Henoc Muamba and runner up Cameron Judge will line up at the MIKE linebacker and the WILL linebacker positions, respectively. Muamba finished second in the league in defensive tackles (93) and fourth in total defensive plays (104), helping Montreal finish second in the East Division and return to the playoffs for the first time since 2014. Judge recorded 61 tackles, five sacks, two interceptions and a touchdown in his third season in Riderville.

The SAM linebacker position will likely be filled by Chris Edwards, who inked a deal with the Argos earlier in June.

Robertson Daniel, who was acquired by the Argos in a trade with the Calgary Stampeders that also included Rogers and DL Cordarro Law, will likely start at corner with Canadian Arjun Colquhoun starting on the other side. Alden Darby is the likely starter at free safety and Shaq Richardson and Crezdon Butler could round out the secondary in the halfback spots.

They say that games are won and lost in the trenches and the Argos certainly have addressed that. With Charleston Hughes, Law, Jhaustin Thomas and Drake Nevis, Toronto will look to improve their sack totals from 2019, where the team got to opposing QBs 35 times (only ahead of BC, Ottawa and Montreal).

Boris Bede is the new addition to Toronto’s special teams unit and will likely take the bulk of the kicking and punting duties. Worthy appears to be the front runner to return kicks but Terrell Sinkfield, Craig Rucker and Damion Jeanpiere all have a chance to win the job in camp.