The first thing that comes to mind is always that voice. Which is funny because Rod Smith makes his living in the visual medium of television so while we see him on TSN the first thing that sticks out is what we hear. That deep baritone voice that could be used to bang out La Bohème at the Opera House is instead narrating a Brandon Banks touchdown. Back in his college days the host of CFL on TSN was an offensive lineman for the Queen’s Gaels, he started at TSN in the late 1980’s, went on to anchor SportsCentre and is now one of the faces (and voice!) of CFL football.

Despite his stature Rod is about as unintimidating as it gets and is always gracious with his time. So with no actual football games going on for me to break down or be sarcastic about I decided the best way to bring at least some slice of Canadian football would be to interview Rod about his journey into football, his first days covering the CFL and just how much vitriol is directed at everyone at TSN when the annual Top-50 players list comes out.

This interview allows me to accomplish something I have never done before; I get to break news! As a chortling gas bag filled with snark I never get to be the “journalist.” But it’s time to set the record straight, Rod Smith was never a guard during his football playing days for the Queen’s Gaels. He has no idea where that got started but Smith started off as a freshman in 1979 playing centre before moving over to right tackle. So the good people at Wikipedia please feel free to update. Rod is the first to tell you he was not the most physically gifted linemen but a combination of football smarts, love of the game and knowing where you need to be on the field at all times allowed him to more than hold his own on the offensive line. 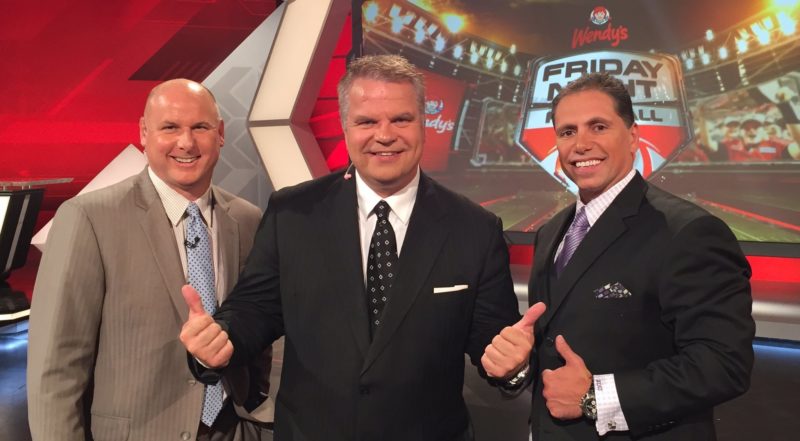 Growing up in Ottawa in the late 1960’s, the Rough Riders were the big team in town and how could they not be with Russ Jackson leading the franchise to Grey Cup victories in 1968 and 1969? Football was a big part of the Smith household even if it meant a young Rod had to suffer through cold Grey Cup parades with bitter winds whipping around the Rideau Canal. Rod started playing minor football at the age of 11 and even won MVP for his league, a remarkable achievement considering he was a defensive end. How often does a player at that position win MVP? Even Willie Jefferson has yet to win a MOP. In grade nine Rod had to choose between hockey or football, hard to do both sports with all the practice times and maintain respectable grades. Football it was.

When asked to name his favourite players growing up Rod immediately becomes an encyclopedia for all things Ottawa Rough Riders football. The big names like quarterbacks Tony Gabriel (The Ottawa version, sorry Hamilton), Condredge Holloway, defensive end Wayne Smith and fullback Jim Evenson are just a couple from his list. Hearing Rod rattle off names is a reminder that for so many of us the teams that we rooted for in our youth, our teenage years are the ones that stick with us more than during any other time period. I cover sports for a living, I love all sports but they never meant more to me than when I was 15, I suspect the same is true for Rod.

Quick aside, in discussing Wayne Smith Rod casually mentioned the “capital punishment’ defence. This was the nickname for the Rough Riders defensive line in the early 1970’s that helped carry them to the 1973 Grey Cup. First off is that the most intimidating nickname in the history of sports? Also, I am fairly sure you could never have that nickname in 2020. I need to find footage of the 1973 Ottawa defence.

Rod was able to put aside his childhood allegiances to admit if he was drafting one player in their prime to build a team around it would be Doug Flutie. That is the right answer. Of course, because of the football mind of Rod the conversation soon goes into Flutie’s first year where he had more interceptions than touchdowns as a member of the BC Lions. That train of thought then bounces to that wild 52-41 Lions win over Rocket Ismail and the Toronto Argonauts in 1991 where Flutie led the Lions back from an early 21-3 deficit.

Taking over the hosting duties for the CFL on TSN in June of 2014 felt like a home coming of sorts for Rod. Rod hosted TSN’s coverage of the CFL for a single season back in 1997. After that it was in the more than capable hands of James Duthie and then Dave Randorf before Smith took over six years ago. When the opportunity came along for Rod he jumped at it, not only was it going back to a familiar TV space but as football had been in his blood since he was a child this was an easy decision. Back in 1997 TSN was not the exclusive broadcaster of the CFL. Rod reminded me of this when asked about some of the biggest changes to covering the game now versus in ‘97. TSN would broadcast the games in the summer and then the CBC would step in pick up some of the regular season slack but would have all the playoffs. Rod had nothing but praise for the work done by the CBC but you can understand how people at TSN would be bummed out about not covering the Grey Cup considering they carried the ball for much of the summer. That would all change in 2008 when TSN got all the broadcast rights.

So what about the contentious TSN Top-50 players list? Rod bears very little of the brunt of any upset feelings from players and in his mind while it can be a sensitive subject most players are good natured about it. Beyond the odd incident where a player like Jerome Messam would stare into the camera during a game to call out the voters, Rod has yet to be called out about a particular players “low” ranking. The funniest part of our interview was Rod saying that Milt Stegall would simply tell every complaining player that he had them ranked way higher than what the others voters had. Now that is the best approach to dealing with disgruntled players! Rod admits it is not easy as you have to combine statistics with projections of improvement or decline and their overall impact on their respective team when coming up with the final list and that yes when the dust settles he sometimes is left shaking his head at who is ranked where. This will never be an exact science.

The most memorable argument Rod can remember the panel having was back in 2018 when during a Lions/Tiger-Cats game there was that infamous hit by Odell Willis on Zach Collaros that knocked him out of the game. Before the hit, the plan was for a shorter segment as they had a pre-produced feature they were going to air. All plans changed after that hit. Rod told the producers to scrap everything and simply debate what they had just saw. Chris Schultz said it was a cheap shot while Jock Clime and Milt believed it was a football play. It never got personal, but it was the necessary heated argument as it allowed both fan bases opinions to be expressed. As Rod points out that it is the crucial role of the panel to represent what is going on in the minds of the viewer at home.

To my great friends beside me, and the many behind the scenes, thanks for an unforgettable season!!#CFLonTSN pic.twitter.com/QLrXqn1rqj

My favourite part of the interview was listening to Rod explain part of his process while sitting with the panel watching games. He will often just sit quietly and listen to what the rest of panelists are saying. Rod’s job is to help create natural conversation, in a sense to play the other broadcasters like an instrument. If Davis Sanchez is upset by something he is seeing or Henry Burris is impressed with a quarterback’s decision making it is up to Rod to get these opinions on air. Rod admits it can be hard to keep up with all the X’s & O’s that are thrown around by Burris and Matt Dunigan but at its best hanging out in the TSN studios is like watching football in your living room with your friends. The downside is there is no beer but you also get to be surrounded by some of the smartest people to analyze football.

A couple quick quarterback notes. Yes, Matt Dunigan is excellent working the barbeque and has given plenty of grilling tips to Rod. Henry Burris got a classic rookie initiation on his first day on the job when the rest of the panel told him to “shove it” after Burris broke down an upcoming game.  The origin for this moment goes back to 2016 when during an interview with Matthew Scianitti and Burris, upset by some of the criticism he had received, looked into the camera on live TV and said “all you guys at TSN can shove it.” Rod understood it was the heat of the moment, there is so much pressure in the game and Burris was having an up and down year before putting it together for the Grey Cup. It was all water under the bridge but you never know what was going to happen when Burris joined TSN. Burris laughed on set for that low event hazing and has been a great addition to the set.

As for the game in 2020 Rod misses it terribly. This is such a strange time especially for CFL fans. Other professional sports have seen their leagues shut down, delayed or cancelled all together due to labour squabbles but that is not something we have had up here. Rod doesn’t know if there will be a season but is of course rooting for football to return if (and he made sure this was a BIG if) the game can come back sensibly and safely.

Oh and Rod did pick Winnipeg to beat Hamilton in the Grey Cup. I’m making sure to end with this. It’s the least I could do for Rod who was so generous with his time. Here’s hoping we can all see him and the rest of the CFL on TSN panel arguing football as we slip into the bliss of that late night west coast game.