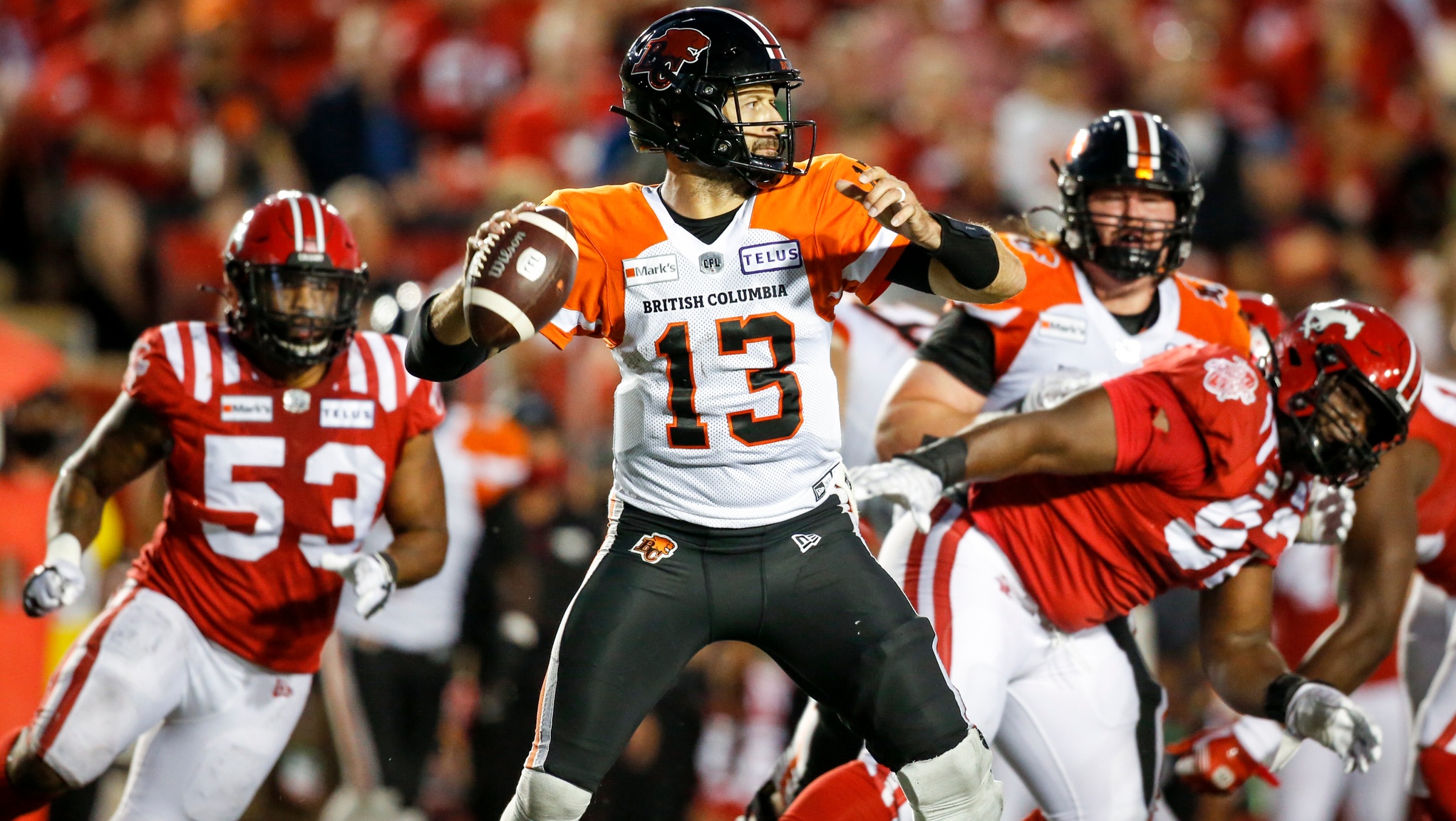 CALGARY — After getting the nod for the surprise start minutes before kickoff against the Calgary Stampeders in Week 2, Michael Reilly completed 79 per cent of his passes for 342 yards to help lead the BC Lions to a 15-9 win.

The 36-year-old also scored a one-yard rushing touchdown while playing all four quarters for the first time this season.

Victoria, B.C., native Nathan Rourke was expected to be behind centre due to Reilly’s sore right elbow, but the veteran’s comfort level during pre-game warmups ultimately earned him the green light.

“Basically we were able to get it tonight pre-game where we were thinking we were going to be able to get it last week,” Reilly said. “That was the expectation last week, and for whatever reason it didn’t respond how we thought it was going to. But tonight it did.”

Rourke ended up getting the start in Week 1 on the road against the Saskatchewan Roughriders, but Reilly entered the game in the second half and nearly led a successful comeback with 203 passing yards and a touchdown.

The quarterback showed no apparent signs of injury on Thursday night against Calgary, completing numerous deep passes with velocity and sharp timing. He threw for 231 yards in the first half with few misses.

“Felt great early in the game, certainly late in the game it started to tighten up a bit and things like that,” Reilly said.

RELATED
» Reilly, Lions’ defence dominate Stamps for 1st win
» Through the Lens: Lions at Stampeders
» Boxscore: Stampeders, Lions by the numbers
» Watch: Hardin picks off Mitchell in the endzone

He was truly a game-time decision, and Lions head coach Rick Campbell made it clear that Reilly would continue to start as long as he’s healthy enough to perform.

“He showed in warmups that he could control the ball and throw effectively. We’re going to use him whenever he’s available,” Campbell said.

While BC bounced back from its season-opening loss with an impressive road win, the victory was largely made possible by a stout defensive performance. Four different players intercepted Bo Levi Mitchell, and the Lions also recorded three timely sacks while shutting down Calgary’s offensive threats.

“Our defence played phenomenal tonight. They had a great game, and that’s no small feat going up against Bo,” Reilly said.

Campbell was even more impressed with his defenders given the overall lack of CFL experience throughout the young starting lineup.

“We want to keep growing on defence. Six of our 12 starters on defence tonight are guys that are first-year CFLers,” Campbell said.

“I’ve been optimistic through training camp and going into the season that these guys can do some good stuff, and they showed up tonight and made some big plays when we needed it.”

The defensive performance was especially important with BC’s offence only reaching the end zone once, settling for field goals on multiple drives — something Reilly is focused on fixing.

“It was good to get in the end zone because we struggled with that tonight,” Reilly said. “I thought our offence played really well, but one thing that we will certainly watch on tape and come away with is that we need to be more efficient in the red zone; we left a lot of points out there.”

One thing helping the unpredictable quarterback situation in BC is the level of constant communication between the two pivots, with Rourke always ready to enter the game on a moment’s notice.

“That’s not an easy position for him [Rourke] to be in, but me and him thankfully have great communication and he certainly handles things well,” Reilly said. “Me and him keep talking throughout the game, letting him know how I’m feeling so if there comes a point when it’s not feeling great, he’ll be ready to go.”

The Lions will look to keep things going when they host the Edmonton Elks next Thursday at 10:00 p.m. ET, but it remains to be seen who will lead the way at quarterback.

“I don’t know,” Campbell said regarding the Week 3 starter. “We’re going to have to see how Mike is tomorrow, that’s going to be one indicator, and [we’ll] go from there. We’re certainly not choosing to live like this. We wish everybody was healthy and we were crystal clear on what’s going on.”