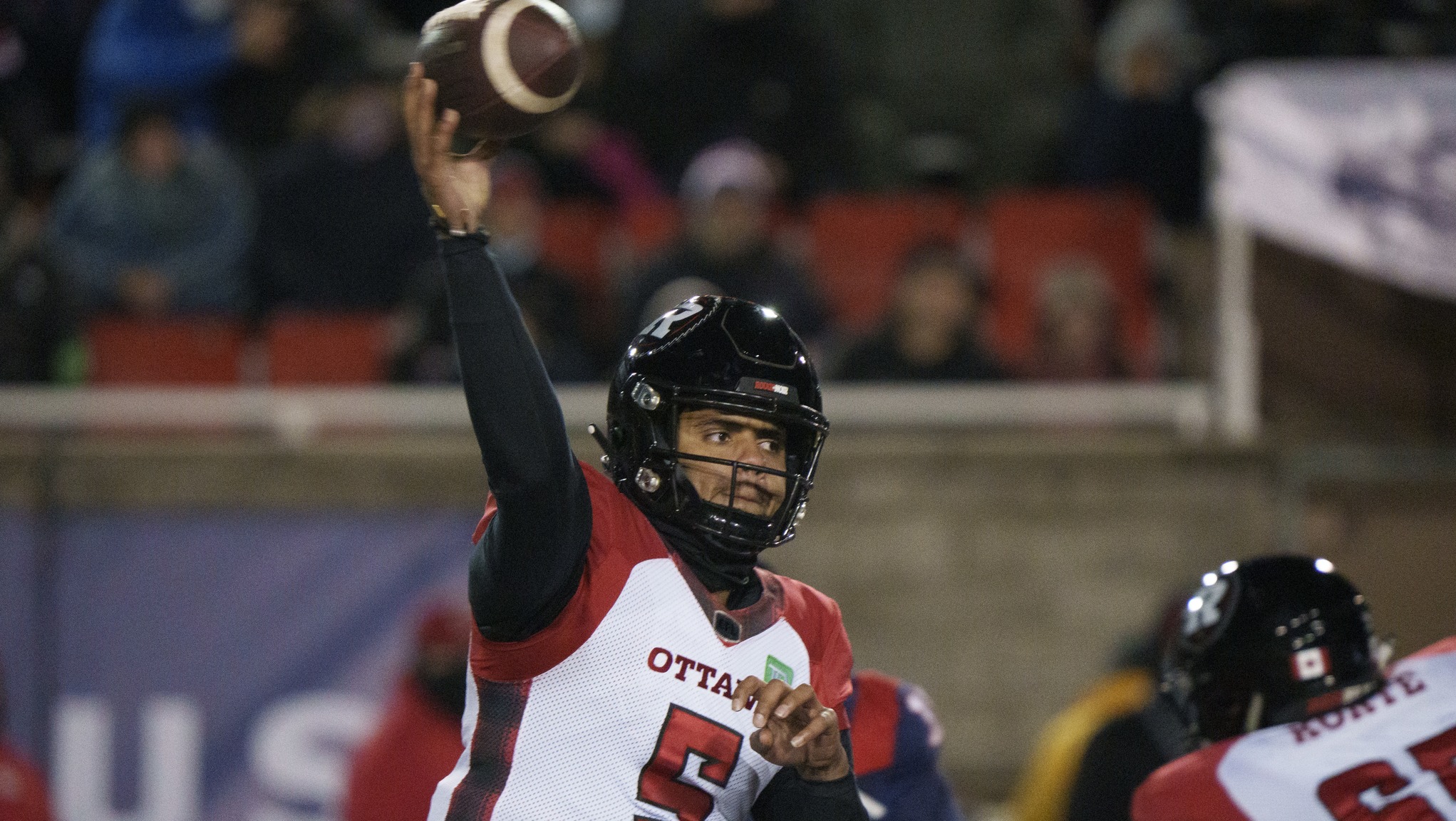 MONTREAL — The Ottawa REDBLACKS found a way to end a disappointing season on a high note.

The team snapped a six-game losing skid in their season finale by storming back late to claim a 19-18 victory over the playoff-bound Montreal Alouettes, and multiple players stepped up to give Ottawa hope heading into an important off-season.

Quarterback Caleb Evans posted one of his best performances of his rookie season by rushing for two scores and throwing a pair of two-point conversions in the second half — including the game-winner with eleven seconds left.

Head coach Paul LaPolice saw his team finish with a 3-11 record, including just one win at home, but he said he was proud of the determined effort they sustained throughout the difficult season.

Getting the most out of a young offensive line while also trying to solidify the quarterback situation was just one of the challenges the team faced throughout the year.

“I’m humbled by what happened to our season and our record, but I’m proud of the men in this room,” LaPolice said. “The resiliency they have each week, how they showed up, and they didn’t turn fingers. They just tried to work to get better and continue to grow.”

Evans completed 18 of 29 passes for 173 yards while also adding 56 rushing yards in the Week 16 win. The 23-year-old quarterback shined on the game-winning drive by only missing one of his seven pass attempts with the game on the line.

Despite starting with the ball deep in their own end with just three minutes on the clock, Evans found a way to guide the offence the length of the field for the win.

“I told them ‘this is our last drive. Let’s score and let’s go home happy,’” Evans said. “The guys responded well with me, and we executed well.”

Evans had a strong CFL debut in Week 9 with three touchdown passes, but he would go on to experience growing pains with nine interceptions over the four games that followed. He said his inaugural campaign provided a lot of learning opportunities to build upon.

“I’ve always just tried to take the ups and the downs and learn from them,” Evans said. “Never take a loss or a bad game or anything as a loss, take it as a lesson and learn from it and build from that. That’s what I’ve been doing ever since I’ve been playing.”

Along with the play of Evans, Ottawa was also powered by a defence that didn’t surrender a single point in the second half.

The unit finished with three sacks and two forced fumbles, including a late turnover in the fourth quarter that led to the game-winning drive. Defensive lineman Davon Coleman pounced on both fumbles to secure possession for Ottawa.

Another major bright spot was the play of dynamic running back Timothy Flanders, who led the team in both rushing and receiving.

Flanders gained 62 yards on 10 carries while also contributing 67 receiving yards, and his 39-yard screen play with under two minutes remaining was the catalyst on the decisive drive. The 30-year-old CFL veteran finished the season as Ottawa’s leading rusher.

“It feels good for me personally,” Flanders said. “I mean just to show the team, show the staff and the fans something to look forward to for next year.”