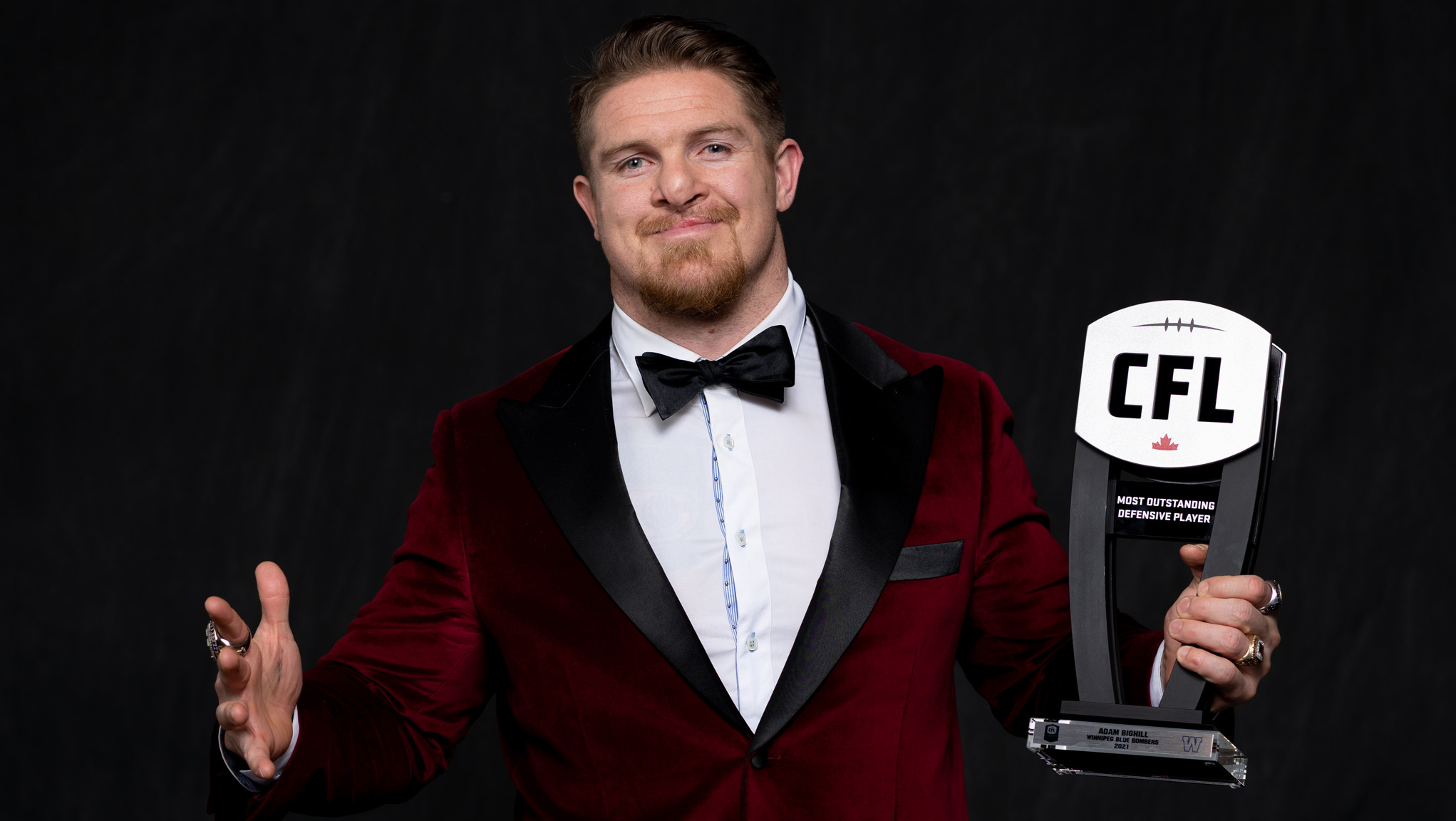 HAMILTON — On the heels of an 11-3 season that separated them from the rest of the pack, it was no surprise that the Winnipeg Blue Bombers also dominated the 2021 CFL Awards.

Quarterback Zach Collaros was named the league’s Most Outstanding Player, while Stanley Bryant was named Most Outstanding Lineman. Linebacker Adam Bighill picked up Most Outstanding Defensive Player honours and Mike O’Shea picked up his first-ever Coach of the Year award. The Bombers were a perfect 4-4 on their award nominations and wins on Friday night at the Hamilton Convention Centre.

“It’s been an incredible ride,” Collaros said after winning the award.

“The process isn’t over. We won some awards tonight…but all that matters is Sunday. We have our eyes on that.”

TSN’s Kate Beirness hosted and brought a ballroom full of players and their families, along with fans streaming live on CFL.ca through the night, with frontline workers from Hamilton helping with award presentations.

“You always envision the best and this is pretty darn close,” Bighill said of the place he and the Bombers are in.

“I knew there was a good thing going on in Winnipeg before I left the CFL for the NFL. When it was time to come back, Winnipeg was at the top of the list for a lot of reasons. Former teammates and a big one was Mike O’Shea. It’s going pretty good.”

In his 10th CFL season Collaros led the league with 20 touchdown passes this year, with an efficiency rating of 111, while passing for 3,185 yards and completing a career-best 70.2 per cent of his attempts. His passing efficiency is second all-time among Bombers’ starting QBs. Collaros is the first Bomber since Milt Stegall (2002) to win MOP. Collaros received 43 first-place votes.

Bighill became the sixth player in league history to win three Most Outstanding Defensive Player awards. He had 70 tackles, two sacks, two interceptions a pair of fumble recoveries and a touchdown this year to lead a ferocious Bombers’ defensive attack.

“It’s the most fun I’ve had playing professional football,” Bighill said, thanking the organization for the care they take of their players.

The Bombers’ defence had the fewest points allowed (12.9 per game), fewest offensive touchdowns (15), lowest net offence (281.3), lowest second-down efficiency (40.3 per cent), most turnovers forced (38) and lowest opponent passing efficiency (71.3). The Bombers allowed 13.4 points per game, which is the ninth-fewest points per game in CFL history and the lowest mark a team has posted since 1970.

Bryant became the first Blue Bomber to be named Outstanding Offensive Lineman on three occasions. He started 13 of the team’s 14 games in 2021 and helped anchor an o-line that allowed a league-low 16 sacks and allowing a trio of 100-yard rushing performances from Andrew Harris, Brady Oliveira and Johnny Augustine.

Winnipeg’s o-line fronted an offence that finished first in rushing touchdowns (14) and second in rushing yards per game (119.7) and yards per attempt (5.3). The team was tops in passing efficiency (101.5) and 30-plus-yard completions (26) and drew even with Hamilton for the fewest turnovers made (20).

Bryant is the ninth offensive lineman in Bombers’ history to win the award, taking 50 first-place votes.

As the Bombers hit the 11-3 mark this season, O’Shea was at the helm of a Winnipeg team that posted its best winning percentage (.786) since 1961.

The Bombers hit double-digit wins for the fifth-consecutive season, making him just the second coach in team history to accomplish that feat, after Bud Grant’s run of six consecutive from 1957 to 1962. O’Shea had 47 first-place votes in the process, as he became the first Bombers’ coach to win the award in 20 years.

For Williams, the outstanding rookie nod was recognition of some extraordinary patience. The South Carolina native was in uniform for the Ottawa REDBLACKS in 2019 for a pre-season game when the organization learned his mother is a Canadian citizen. He left the team, procured his citizenship and returned in 2020, ready to enter the CFL Draft. He got to take part in the East Regional Combine before the world came to a halt with the onset of the pandemic. He went first overall in the Draft but had to wait another year to play.

Even in training camp this year, he had to pack it in early with his team when forest fires near their camp in Kamloops made conditions unplayable. When he hit the field, he led the Lions with 92 tackles, finishing second in the league and breaking a Canadian rookie record held by Mike O’Shea that had stood for almost three decades.

“Here I am now. It’s beautiful,” Williams said, standing on the stage after winning the award.

“To be a top athlete you’ve got to have something about you that’s crazy. Every day I was acting like today will be my day to shine.”

Despite the 14-game season, Lokombo fell just five tackles short of his career-best of 71. The 66 he had placed him 10th in the league and was his third consecutive season going over the 50-tackle mark. He had a career-high four sacks and hit a new personal best with three interceptions. He found the end zone in Week 6 this season, giving him his first-career TD.

Other award winners on the night included Sara May, a Hamilton nurse that has served as a frontline worker through the pandemic, winning The Commissioner’s Award. The award recognizes an individual or group for outstanding contributions to the league.

Doctors McCormack and Naidu — the CFL’s Chief Medical Officers — were honoured with the Hugh Campbell Distinguished Leadership Award for their leadership and contributions to the league. The duo was paramount in establishing and maintaining the league’s health and safety protocols this season.

Over the last year, Daly developed community relationships at McMaster University and was involved with the McMaster Athletes Care program. Daly is also a spokesperson for the TELUS #EndBullying All-Stars and Be More Than a Bystander programs.

Carol Longmuir, the BC Lions’ longtime director of finance and administration, was the recipient of the Jane Mawby Tribute Award, which recognizes a highly-valued, yet too often unsung current employee at the club or league level.

The CFL Awards winners were chosen by a panel of voters, including representation from the Football Reports of Canada (FRC) from all nine markets, members of the national chapter of the FRC and the head coaches of the CFL. In total, 54 ballots were completed.