TORONTO — For the second week in a row, the most-talked about quarterback in the league will be a player that’s not in these rankings. That could change quickly, though.

Nick Arbuckle‘s trade to the Edmonton Elks is the talk of CFL Twitter at the moment. The idea of Arbuckle getting to take the keys to an offence that’s full of potential that hasn’t fully been realized yet is an interesting one. It’d take a combination of a miracle run and probably some help from other teams to make the playoffs a possibility for the Elks at this point, but should Arbuckle choose to sign in Edmonton, the team’s longer-term outlook changes drastically.

That won’t be the news that Taylor Cornelius was hoping for. The road to becoming a starting quarterback can be a long one, full of changing dynamics and ups and downs. Cornelius need look no further than our No. 6 QB in this week’s index, McLeod Bethel-Thompson, who has been signed, cut, floated through different leagues and now at 33, appears to finally have the job to himself in Toronto.

Of course, this is a subplot to the primary story of the 2021 season, which is the continued dominance of the Winnipeg Blue Bombers. Let’s start with that. 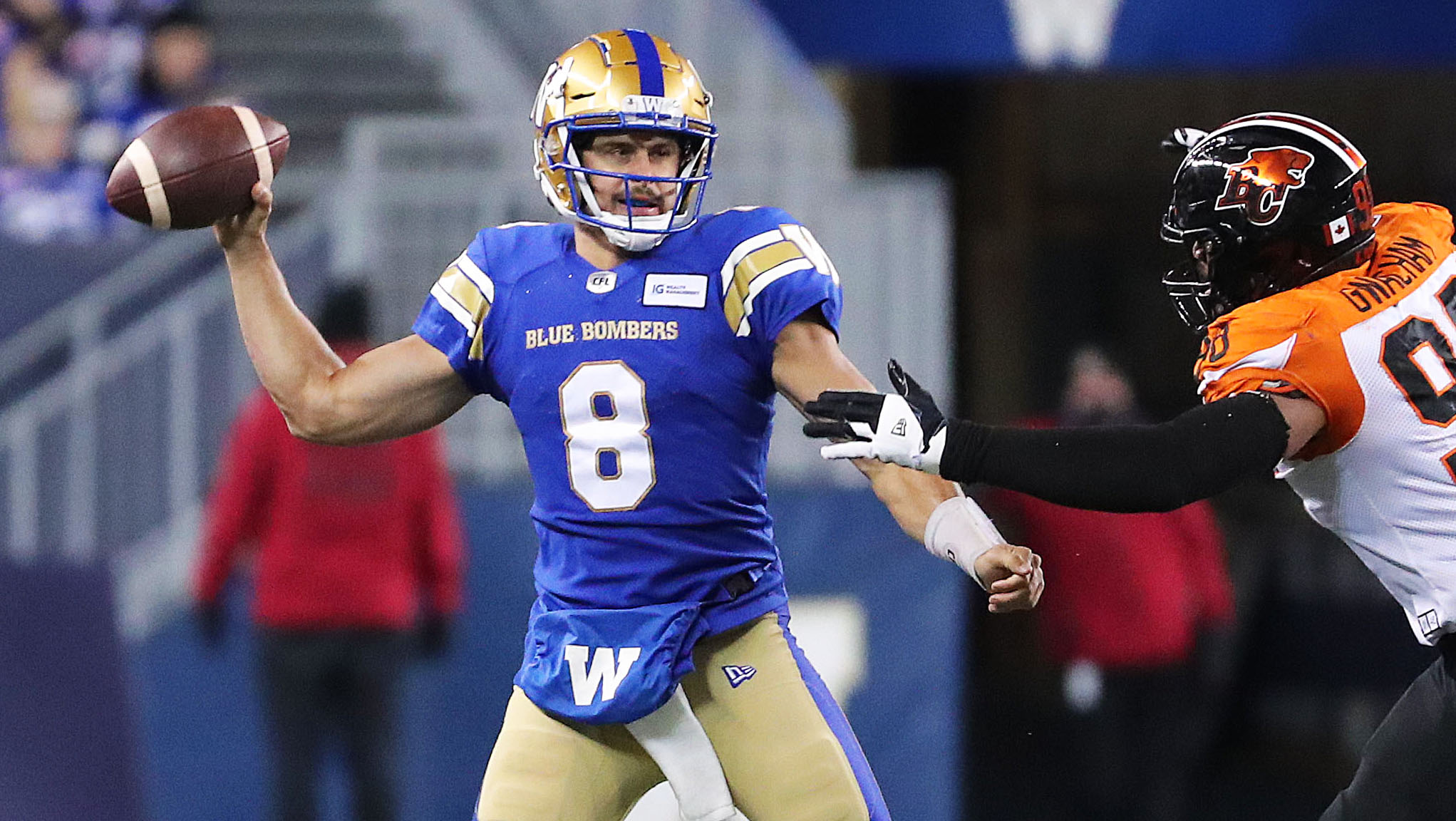 Zach Collaros put an efficient night of work in against the Lions, throwing three touchdown passes in a blowout win that guaranteed the Bombers first place in the West (Jason Halstead/CFL.ca)

Collaros put in a nice and tidy night in the Bombers’ 45-0 win over the visiting BC Lions, with 16-20 passing for 267 yards, three touchdowns and zero interceptions. The league’s leader in passing yards (2,832), you wonder if we might see a little less of Collaros now that the Bombers have locked in the Western Final at IG Field.

Players often talk about a win being a win and that each game means as much as the last and the next one. It’s not true. The Riders’ win over Calgary was a clearing of a mental hurdle that can only help them as they get closer to the playoffs. Fajardo went 21-26 for 222 yards, a pair of touchdowns and one interception to close out Saturday’s triple-header, with the offence looking better than it has recently. It may take some time to work Duke Williams and Shaq Evans into the flow of the offence, but it’ll get there.

This hasn’t been a good stretch for Reilly, who was sacked four times in the Lions’ loss to the Bombers. He’s been held under 200 passing yards and hasn’t thrown for a TD in the last three games, with just 131 on Saturday in Winnipeg. He also threw his second pick-six in as many weeks, with Willie Jefferson zigzagging his way to the end zone for the score on Saturday, pushing an out of reach game past the brink in the third quarter.

Mitchell and the Stamps put up big numbers on Saturday at home — Calgary’s offence had 381 yards and Mitchell threw for 311 — but turnovers hurt them. Mitchell had three interceptions against the one TD he threw, after looking like his old, efficient self the week prior against the Lions. A trip to Ottawa to face the REDBLACKS could be just what the doctor ordered for Mitchell and the Stamps, who despite Saturday’s setback are still very much in the mix and have a shot at hosting the Western Semi-Final.

You can’t do anything about the team that you’re going up against. You can only take the field and perform. That’s exactly what Masoli did in last week’s game against the REDBLACKS. He was a pristine 25-28 for 320 yards and a pair of touchdowns. Edmonton’s defence is a tough one and will give the Ticats a tougher go than Ottawa could manage last week. You can see a steady improvement from Masoli in his three games back since he was injured. He and the Ticats will hope the win over Ottawa was a launchpad to more offensive fireworks.

If there were any questions about the Argos’ commitment to Bethel-Thompson, the answers came in two parts. First, Ryan Dinwiddie went to bat for McBeth after his four-interception performance against the Als. Second, the team sent Nick Arbuckle — the guy that was touted as the starter when he signed back in February — off to Edmonton in a pre-trade deadline deal on Tuesday. Bethel-Thompson’s journey to this point is one of perseverance. He’ll have to put last week’s showing behind him and get back to the smart, clean work he’s put in for the majority of this season.

So far, Shiltz is making this a fun getting-to-know-you stretch with the Als. There hasn’t been a tremendous changeup in style of QB play with Vernon Adams Jr. Shiltz hasn’t been afraid to take the big shot downfield, but when your running back is racking up the ground yards the way that William Stanback did against the Argos, your passing numbers will be modest like Shiltz’s were. With Trevor Harris joining the team on the field this week, we may start to get a better sense of how Jones wants to use his QBs for the remainder of the season.

Certainty is a rare luxury for very few in football, but Cornelius may go into this week a little less of it than he thought he might have had when he last set foot on the field. When the Elks traded Trevor Harris, it seemed as if the keys would be handed to Cornelius, who first impressed head coach Jaime Elizondo when the two were in the XFL together. The arrival of a more experienced QB like Nick Arbuckle would spell more change for Cornelius, who has had some good moments against tough opposition (seeing Winnipeg three times this season).

Since Evans’ bright start in his CFL debut win over Edmonton, it’s been a tough go for Evans. After that three-TD, zero INT showing at home, Evans has thrown nine interceptions and just one touchdown in his last four games. With the REDBLACKS eliminated from playoff contention after their loss in Hamilton, the team’s remaining games are about evaluation and planning for the future. With Devlin Hodges getting a look in the second half of Saturday’s game, it’ll be interesting to see how Paul LaPolice finishes out the schedule.

Hodges’ debut yielded cautious results, going 8-16 for 49 yards and an interception against Hamilton’s tough defence. Up against Calgary this week, it won’t get any easier for Hodges or Evans. LaPolice wants to get his team some wins or a win in their final three games and admitted after Saturday’s loss he went against his plan of using Hodges solely for short yardage. We think we’ll see more of him before the curtains close on Ottawa’s 2021 campaign.