TORONTO — Whether it’s Joni Mitchell singing it, or a remixed/sampled version of it from Janet Jackson, you may have been thinking of that famous catchy hook on the weekend as you watched the Winnipeg Blue Bombers.

You don’t really know what you’ve got — even if in the case of Zach Collaros, he’s held down the No. 1 spot around here throughout the 2021 season — until it’s gone.

Of course, Collaros will be back in the Bombers’ lineup for the Western Final on Dec. 5 in Winnipeg. It’s also worth pointing out that you can’t put their loss to Montreal entirely on backup Sean McGuire, even if he had his struggles with the start at QB. If anything, the Bombers finally showed a mortal side in Montreal. True, that came with the absence of many of the key mortals in their lineup, but the performance we saw on the field last week was a stark departure from the group that’s found ways to win and closed off opponents’ airspace in fourth quarters all year. We’re confident it’s a temporary thing and that the unfriendly skies can be re-established when the Bombers need them to be.

You won’t have to look far to find a familiar face behind Collaros’ spot in these rankings. Bo Levi Mitchell led the Stamps to a big win on Friday in BC, clinching his team a playoff appearance at the expense of his longtime rival and friend, Michael Reilly. It wasn’t do-or-die for the Stamps, but a loss would have put their backs against the wall in Week 16. Instead, thanks to Mitchell’s strong play, he and the Stamps have this week to focus on their Western Semi-Final matchup with Saskatchewan. The two-time MOP could be a force as he and the Stamps take their act on the road next weekend. 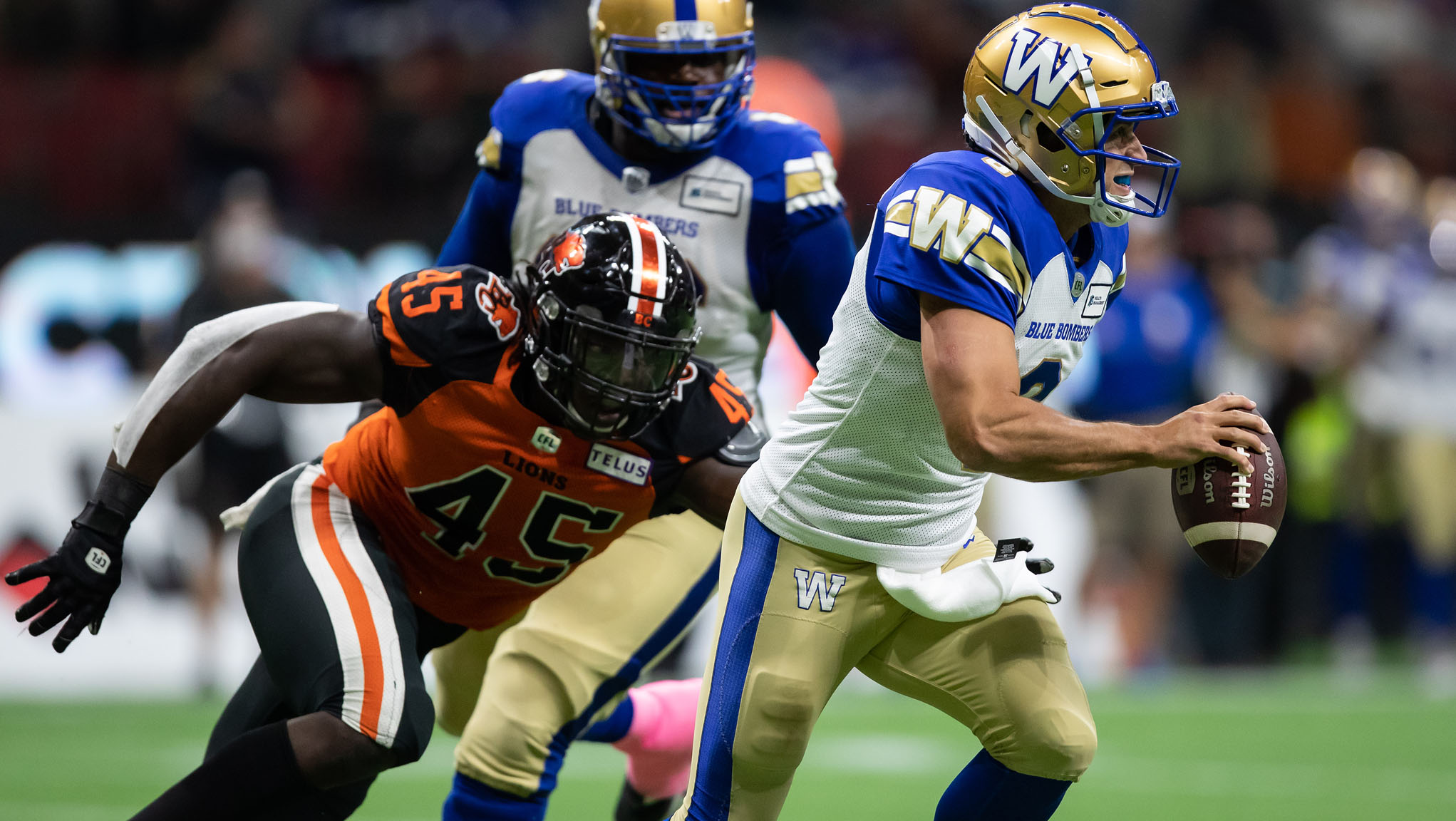 Zach Collaros‘ fit with the Bombers is unquestionable and his case as the MOP is a very solid one after leading them on an 11-1 run this season (Photo: The Canadian Press)

Normally when a quarterback misses a game, we take them out of these rankings until we have a game to grade them upon again. Collaros is the perfect exception to the rule here. Assuming he doesn’t get on the field this week, he’ll likely finish second in the league in passing yards (3,112) with a league-best 20 touchdowns to six interceptions. It’s been a remarkable season for Collaros, who has reignited his career after being dogged by injuries and questions about his ability through his time in Saskatchewan and his vagabond 2019 season that ended with him lifting the Grey Cup.

Up against a desperate Lions team last week, Mitchell had arguably his best performance of the season, throwing three touchdowns and zero interceptions while making 76.9 per cent of his passes. It was just his second multiple-TD game and his third zero-INT outing (and his second in a row) this season. Getting Reggie Begelton back is a huge addition to Dave Dickenson’s offence. We think the Riders will have their hands full when the Stamps make it to Mosaic Stadium on Nov. 28.

The season ends in BC with Reilly and the Lions missing the playoffs again. This couldn’t have been what Reilly saw when he made the move from Edmonton as a free agent in 2019. You can argue that he’s held up his end of the bargain in his time there. He goes into Week 16 leading the league in passing yards (3,283), with 14 touchdowns to six interceptions. There are two great tragedies in BC’s four-win season. One is that we don’t get to see Reilly, one of the league’s greatest QBs on a big stage. The second is that the league’s only indoor venue will not see a playoff game, which is something that could have been a huge advantage this season.

With the Riders having secured their home playoff date last week, we won’t see much, if any of Fajardo in the regular-season finale this week against the Ticats. So Fajardo’s regular-season swan song was a good one, even if it came in a game that was too close for comfort against a two-win Edmonton team. Fajardo’s 22-32 passing for 245 yards and a season-best three TDs to one INT was a very solid outing for a QB and an offence that needed some production to go into the playoffs on a good note. As we said above, the Stampeders won’t be an easy out. Saskatchewan’s offence will have to bring it and if they do, a packed house at Mosaic will eat it up.

Masoli appeared to have hit a good rhythm heading into last week’s game against the Argos, throwing for over 300 yards in three out of his previous four games and not throwing an interception at all since his return to action in Week 9. That all came to a halt against the Argos. While he still threw for 326 yards, his completion rate was 55 per cent and he had a pair of interceptions with zero TDs. Depending on the outcome of Friday’s Montreal-Ottawa game, the Ticats could have to go out Saturday and play to keep their Eastern Semi-Final date at Tim Hortons Field. While that’s not optimal, given what was at stake for them a week ago, it may not be a bad thing for Masoli to get back out on the field with some pressure on him.

The win came against a Winnipeg team that’s saving itself for the Western Final, but for where Harris is at with the Alouettes, that was almost perfect for him. Maybe the game slowed down for him a little, a week after getting the full brunt of the Bombers’ defence at IG Field. For a QB that’s taking a Collaros-like path this season, every rep in a live game helps. You could say the same for the Ottawa team that will make its way to Molson Stadium on Friday. We know what Harris can do when he’s fully plugged into his offence. He could enter into the playoffs — wherever the Eastern Semi-Final is played — in a very good headspace.

With criticism surrounding him and his team, Bethel-Thompson went out and helped create a little silence, as the Argos picked up their biggest win of the season to date. While his touchdowns (10) and interceptions (13) may not be where he’d like them to be, Bethel-Thompson is fifth in the league in passing yards (2,303) and has led his team to the league’s second-best record at 9-4 (tied with Saskatchewan). He has two-plus weeks to rest up and ready himself for an opportunity to take the Argos to the Grey Cup.

When he’s not facing the Bombers and Ticats defences — take a moment to appreciate just how tough that is for a rookie — Cornelius shows some potential. Maybe he’s just getting more comfortable week by week, but his play in a home-and-home series with the Riders was encouraging, with five touchdowns and just one interception. Most impressive was that he kept his team competitive, tapping in to some young, also unproven talent to get points on the board and put some fear into the hearts of Riders fans. We all know Nick Arbuckle will be the guy when camp opens next season, but we also know that QB depth is essential. After a painful season, there might be some light for Elks fans, starting with the most important position on the field.

McGuire’s four interceptions in a rare Winnipeg loss could have been a blow to the confidence of Bombers fans, who have been spoiled by Collaros and his handling of the offence this season. The takeaway, even if we see McGuire back in for the full game this week in Calgary, is that this isn’t this team’s reality. Collaros has excelled in his role and McGuire, albeit playing a much smaller role in the week-to-week workings of this team, has done everything asked of him in it. We know that he’s been good on short yardage this year and has made good decisions when he’s gotten into the game in that capacity. That’ll be his role in the playoffs, too.

You could argue that Hodges belongs above McGuire in these rankings and their CFL resumes might even back that up, given that Hodges has only a quarter of the interceptions that McGuire does. We’d counter that, though, with the argument that Hodges has less overall experience in the CFL and could still be anything, good or bad in this league. It’ll be hard to have a sense of what he could do in this league, even at the conclusion of this week’s game and Ottawa season. Training camp 2022 will be Hodges’ CFL litmus test.