TORONTO — The brilliant (and admittedly internally crafted) saying about the CFL Combine presented by New Era goes, three downs, two days, one chance. On Sunday, it gets ramped up a notch.

National and Global prospects have this one day in front of them to make a final, resounding impression on the watching eyes of the nine teams that make up the CFL. A strong showing through the speed testing and one-on-ones that make up Sunday could give a team the assurances it needs to make a draft decision.

Global d-linemen Noke Toga and Karlis Brauns got teams’ attention on Saturday by posting the top-two totals in the bench press, with National running back Daniel Adeboboye and linebacker Enoch Penny-Laryea showing well both on the bench and in the vertical leap. A pair of receivers that were Western Regional Combine invitees, in Riley Boersma and Gavin Cobb, flexed their athleticism with 40.5-inch vert results.

Every player that steps onto the field at the University of Toronto on Sunday will be looking to make a similar impression, whether it’s through the speed testing events (the 40-yard dash, the broad jump, the three-cone and the shuttle) or the one-on-ones, which will be as close to in-game competition that evaluators will get from these prospects.

This weekend marks the first in-person combine that the league has held in two years, after the pandemic forced the cancellation of the event in 2020 and prospects submitted their testing through video for a virtual combine in 2021. In the string of coach and GM calls that CFL teams held with media on Thursday, personnel from across the league admitted that the in-person evaluation is invaluable and something that, frankly, had been sorely missed.

“There’s nothing that takes the place of of seeing a guy in-person,” Montreal Alouettes’ head coach Khari Jones said.

“Seeing how they move, seeing how they walk, talk all of those things. I think it’s important. To be able to be here again after a couple of years it’s great.” 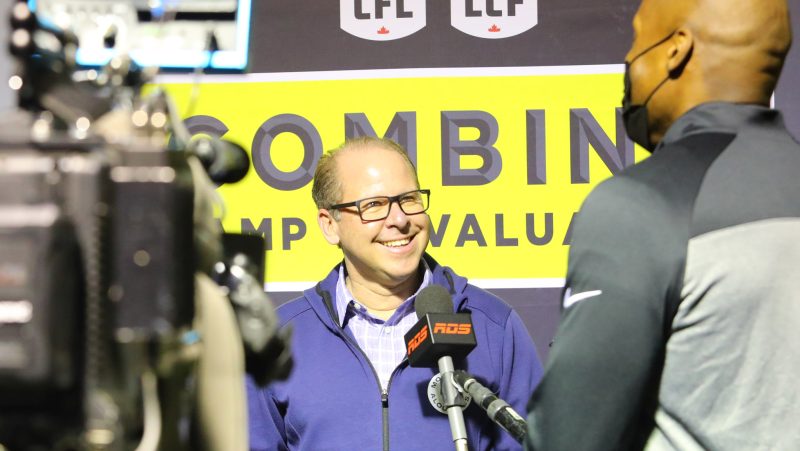 Alouettes’ GM Danny Maciocia has enjoyed getting back to in-person evaluations during the regional and now the CFL Combine in Toronto (Liam Mahoney/CFL.ca)

“It just puts a lot of things into perspective that you shouldn’t take anything for granted,” Als’ GM Danny Maciocia said.

“This is the way it should be. I’m all about doing things face-to-face and in-person. Even when we evaluate these kids (at the combine) there’s no substitution for watching their body language out there, how they take instructions, how they coexist with their respective units. Those are all things that are clearly difficult to evaluate off of a Zoom call.

“I believe we’re going to get a more accurate and a better reading, just the fact that we’re here in person.”

For BC Lions’ co-GM and head coach Rick Campbell, the CFL combine inevitably brings back the memory of seeing Antoine Pruneau in action. The in-person evaluation is what helped sell the Ottawa REDBLACKS on the then-soon-to-be rookie defensive back. The team used its first-ever draft pick on him in 2014 and he’s still with the club.

“After meeting him and spending the weekend with him, I knew that guy was going to be a good CFL player. I didn’t know that until the weekend that I met him and got to hang around him,” Campbell said.

“Kids like him — I call them kids because I’m getting old — but guys like him, you can just see there’s a certain thing about him…where they’re tough, hardworking guys that you know are going to be contributors.”

The prospects hit the field at 10 a.m. on Sunday (with events being streamed live on CFL.ca), looking to be that next prospect that makes a team feel like they have to draft them.