TORONTO — It’s easy to get comfortable at this time of year.

With two weeks of regular-season football left in front of us, we’ve come to figure out who the safe bets are, both for wins and losses (some may point out here that it took a very long time to get here, but that can be a conversation for another day).

For all of the comfort that’s been built up, Week 15 in the CFL season presents a nicely thrown wrench in the pick-making process.

Sean McGuire will get the start on Saturday in Montreal, as he leads the 11-1 Winnipeg Blue Bombers into battle against the Alouettes. The Bombers have been a go-to choice as this season has unfolded, rattling off nine-straight wins and establishing themselves as the cream of the three-down crop. They’ve done that, of course, with Zach Collaros running the show as quarterback. How different will the Bombers be with Collaros holding a clipboard and presumably free to eat whatever Montreal-specific foods he may like while he’s there? How will McGuire do in his place? Will that even matter, given the strength of the Bombers’ defence?

We of course don’t have the answers to those questions, but the team’s announcement on Wednesday afternoon shifted a would-have-been Bombers pick over to the other blue team on the field, while some other people — looking at Jamie Nye, Matt Cauz and Chris O’Leary here — had already settled on the Als at home as their choice.

One other bold choice by the panel of pickers that we’ll discuss more fully below: We have a unanimous selection of the Ticats to go into BMO Field on Friday night and hand the Argos their first home loss of the season. If that happens, it’s a wrench thrown into the fight for the East Division crown. Maybe we’re leaving comfort behind as we head into the playoffs, where anything can happen and the wrenches become the norm and start flying all over the place.

To paraphrase the eternal wisdom of Patches O’Houlihan, if you can dodge a wrench, you can have a successful week of CFL pick making.

RELATED
» Weekly Predictor: All in on the Roughriders
» CFL Pick ‘Em: Make your picks for Week 15!
» Start vs. Sit: A big week for Bo in BC? 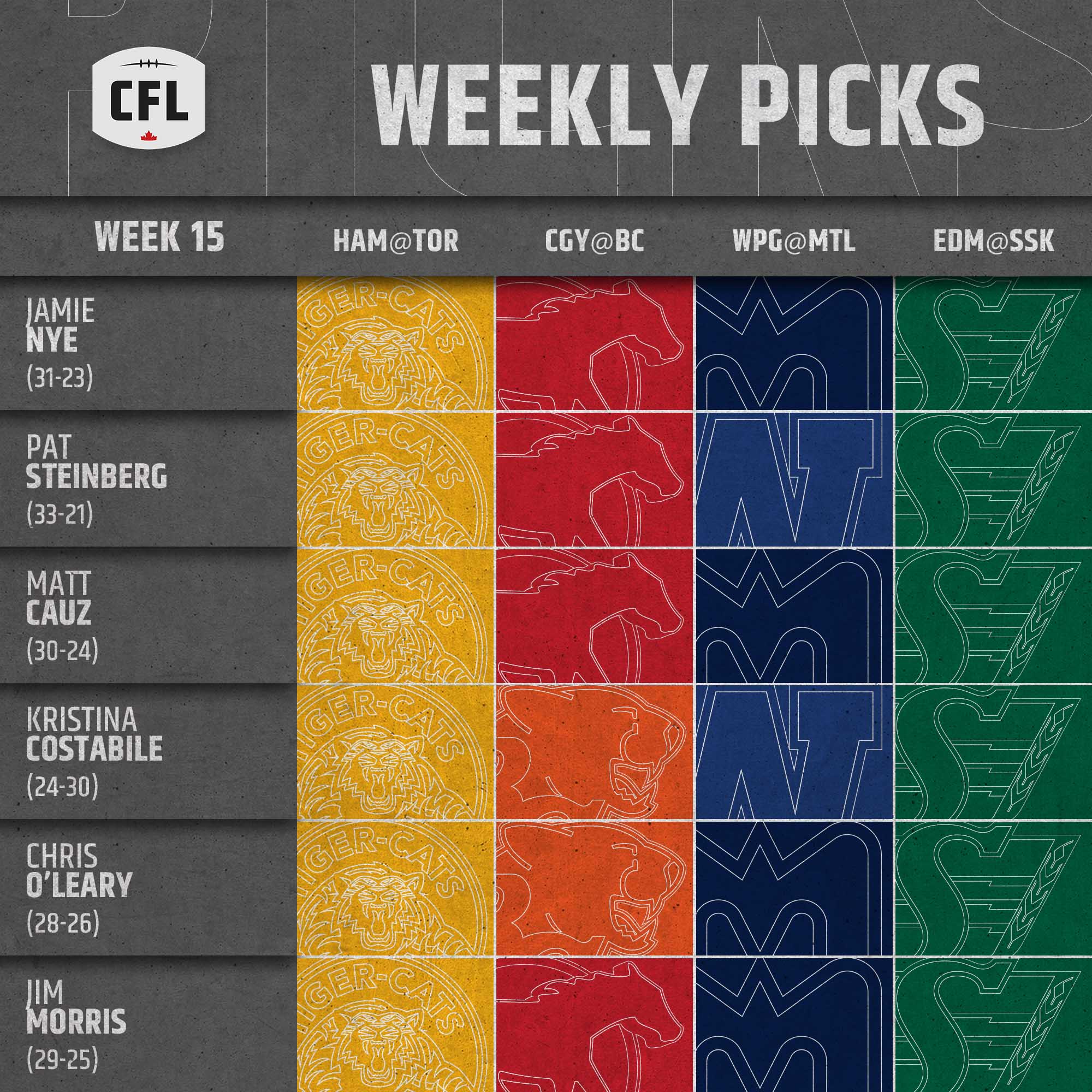 This may come as a surprise to some, that no one on this panel saw the first-place Argos — who are undefeated at home this season — as the likely winner in a first-place showdown with the Ticats. Looking at their play the last few weeks, the Ticats’ offence seems to have hit its stride. We’ve seen what their defence and special teams are capable of. If all three are going, we should have a great game on Friday night. Despite continuing to win, the Argos have seemed shaky these last few weeks. They’ll need some consistent play, from their offence in particular, if they want to lock up the top spot in the East.

The Stamps are coming in off of a bye and have a chance to clinch a playoff berth at the Lions’ expense. After starting the season 1-4, Calgary has gone 5-2 but still hasn’t looked like that dominant, Bo Levi Mitchell-led team that owned the majority of the past decade. With some familiar faces (Tre Roberson, Reggie Begelton) rejoining the team down the stretch, they’re beefed up on talent at the right time. The Lions won’t go easily into the night. They were some kicking issues away from a win in Toronto and gave Hamilton a fight last week. If the Stamps show their human side, Michael Reilly & Co. could make this an interesting game.

We don’t know just how different the Bombers’ offence will look with Sean McGuire at the helm, but it shouldn’t be drastically different from what we’ve seen this season. McGuire has been with the Bombers the past two seasons and has shown well as a backup this year. We also know all about Winnipeg’s shutdown defence and its fourth-quarter stonewalling tactics, allowing just six (six!) points all season in the game’s final frame. Trevor Harris will get his second helping of that defence in as many weeks, riding a steep learning curve with his new team as they try to jockey for playoff positioning. Our panel struggles with embracing the unknown and likes the Als in this late-season matchup.

The Riders held on to leave the Elks winless at home on the season last week and will look to continue to build up their offence this week at Mosaic. Riders head coach Craig Dickenson said he was encouraged by what he saw from the offence in Edmonton and it seems that Duke Williams is getting more comfortable with Cody Fajardo each week. It’s getting late in the season to think the breakthrough is coming, but this might be the perfect setting for the Riders, up against an Elks team that’s playing out the clock on the 2021 campaign.