TORONTO — There’s a very tense scene in Toy Story 3 where Woody and eventually the entire gang falls deep down into a furnace. With a roaring fire not far from their feet, they all join hands, hooves and paws and grimly await what’s in front of them.

That’s kind of how it felt last week when the panel of CFL.ca writers made their picks.

With the heat of losing records at our feet we linked arms, chose Hamilton, Montreal and BC and waited.

Perhaps David Watford and the Ticats played the role of the friendly and Zen-like aliens with the claw that saved the group of toys from its fiery fate.

Sure, we were a uniform 1-2, but we were 1-2 together and we lived to pick another week.

Whether that’s good news or bad is up to the readers and armchair pick makers (we’re getting a 65/35 bad/good vibe, for what it’s worth).

This week, with four games on the schedule again, the unity isn’t quite the same and that’s probably a good thing. Someone’s going to be right, someone’s going to be wrong and we could see the return of some .500 records by Saturday night, depending on how things work out.

We should have a handful of good games in store for us this week, starting with Tuesday night’s Elks-REDBLACKS game in Ottawa, where rookie QBs rule the roost. 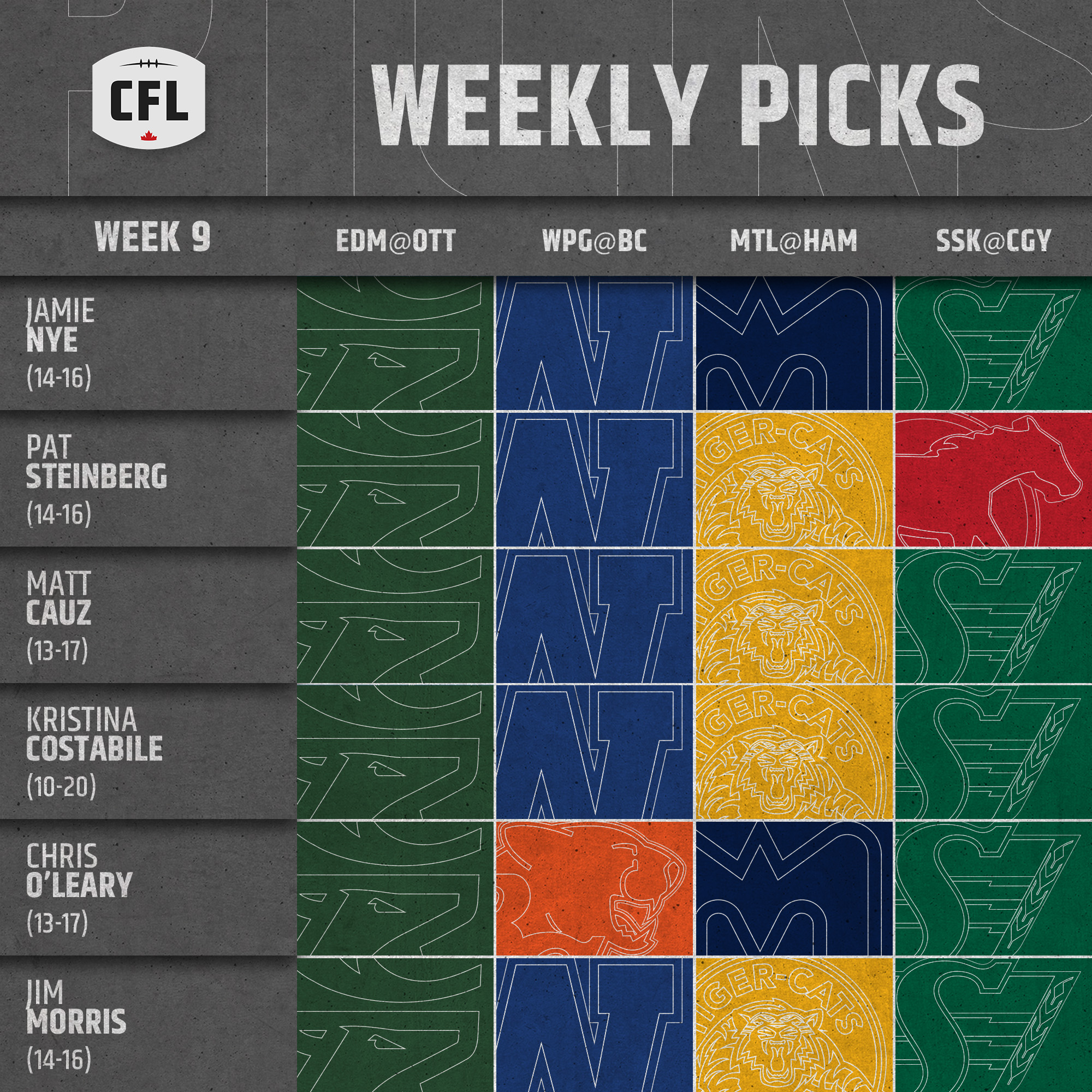 You want a unique wrinkle in making your picks? The QB making his second-ever start in the CFL in Week 9 of the season is more experienced than his opponent. We’re not sure what Paul LaPolice might have up his sleeves for Caleb Evans and Taryn Christion, who are both expected to see the field on Tuesday night, but mid-season action for a pure CFL rookie is a steep hill to climb. Taylor Cornelius can confirm that, having thrown three interceptions against Winnipeg a couple of weeks back in the Elks’ loss. Overall, Edmonton has a stronger defence, which our panel thinks should be able to take advantage of an Ottawa offence that’s struggled from the get go this season.

The Bombers come out of their bye week on a four-game run and head into a tough opponent in BC. The Lions get the tall task of trying to bring the Bombers back down to earth, after letting a game that was almost locked up against the Riders slip through their fingers in the final minutes. As fun as the Michael Reilly-Zach Collaros talk might be, this will be a battle between two excellent defences. Winnipeg (eight) and BC (nine) are the only teams in the league to still be in single digit touchdowns allowed and are tops in turnovers forced, with Winnipeg at 22 and BC at 20. This will be a fun one.

A frustrated and something of a new look Alouettes team — they fired d-line coach Todd Howard on Sunday night, replacing him with Greg Quick — will try to end its two-game slide when they travel to Hamilton. About that: Despite injuries and offensive struggles at points, the Ticats are undefeated at home, riding a streak that runs back to Nov. 3, 2019. It’s not just history on Hamilton’s side. Even with third-stringer David Watford at QB and missing most of their top receivers most of this season, the Ticats have found ways to win, thanks to an aggressive defence and a return game that’s always a TD threat. The panel of writers likes the home team’s odds, especially as Hamilton gets healthier.

Speaking of teams with stacked home records, the Stamps will welcome Cody Fajardo and the Roughriders to McMahon to close out Week 9, but things aren’t the same as they were in years past with the Stamps. The last place team in the West, Calgary is hoping a bye week will help get the offence on the same page and get its defence making stops more consistent to what it has in prior years. Their two interceptions has them tied with Edmonton for last in the league and their nine overall turnovers is just sixth. And they get to deal with a confident Riders team that’s currently firmly in second place in the West.