TORONTO —  The world “humbled” is one of the most frequently misused words in the English language.

People often say it when great things happen to them. You’ve won a Grammy, or a MVP trophy. Perhaps you’ve gotten a new job recently and are tweeting out your farewells and excitement for the future.

While these are undoubtedly great moments, they are not humbling. They might offer you perspective or generate gratitude and you want to appropriately acknowledge those around you in that moment, but “humbled” is not the right word.

No, “humbled” lives a little lower in life’s experiences. Merriam-Webster defines it as destroying power, independence or prestige. A relatable example here would be this committee’s relative lack of success in its weekly picks.

As we enter into Week 3 of the season, Marshall Ferguson is the only one of the six CFL.ca writers to have a winning record. Our usual powerhouse, Matt Cauz, picked up his first wins of the season in Week 2. Our Jamie Nye, who forever has his finger on the pulse of the league, wrote in his Weekly Predictor column, “…here are four more potentially horrendous and equally embarrassing selections.”

This, all six writers can assure you, has been a truly humbling start to the season. There’s optimism, though, that a little predictability could be on its way. If offences settle in and presumably start to catch up to defences across the league in Week 3, the records below should start to rebound as well.

And if the group is wrong, at least this week it’ll mostly be wrong together.

RELATED
» Nye’s Weekly Predictor: All in on the Alouettes
» CFL Pick ‘Em: Make your picks for Week 3!
» Start vs. Sit: An offensive turning point? 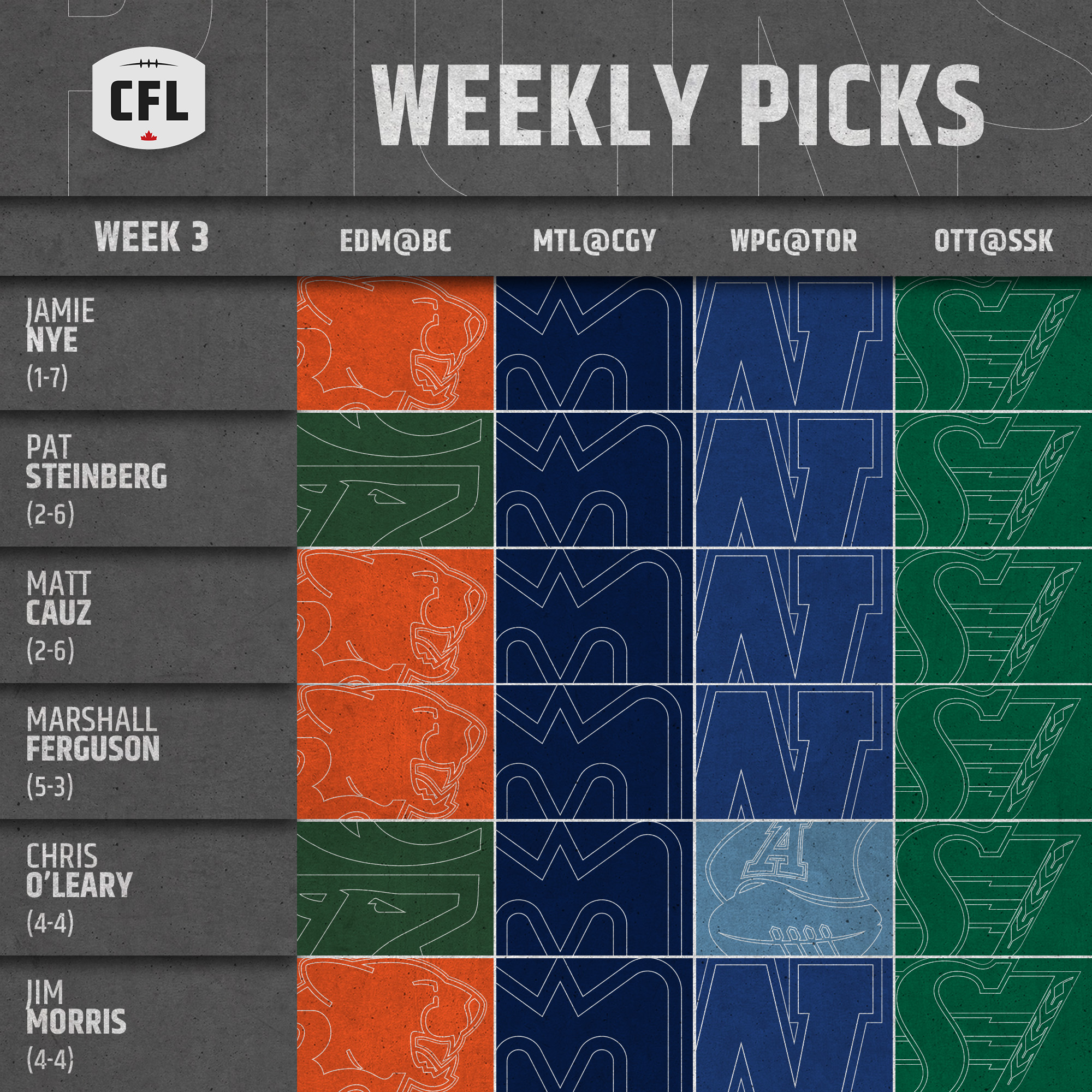 The Elks’ offence has been shockingly underwhelming, considering the talent that’s on the field together. They have to have their breakthrough game at some point, right? Going on the road to face a BC team that might have had a breakthrough of its own last week against Calgary seems like a tall order at this point. Michael Reilly looked like his old self last week and the Lions’ defence came alive, pressuring Bo Levi Mitchell and creating a ton of turnovers. The Lions have the mojo in this one.

Some of the Stamps’ offensive struggles were put under a new light, knowing that Bo Levi Mitchell had been playing injured. It doesn’t get easier for the perennial powerhouse (powerhorse?) with Canadian QB Michael O’Connor taking over as a starter. On the other side, you have a Montreal team coming in having done just about everything right in their win last week over Edmonton. It’s a steep slope for an inexperienced quarterback. We’ve got a consensus in this one.

Nick Arbuckle will get the start as the Argos get to play their first home game in 21 months. As he found out in the second half of last week’s loss, he’s up against a Winnipeg defence that’s started the season in full shutdown mode. If he can steer the Argos through this, it’d be a big statement for a talented team that’s still coming together. It’s difficult to pick against a Winnipeg team that’s playing as complete a game as it is right now though.

We’ll say this about the REDBLACKS, whose fans may complain about being disrespected at 1-0: This is a team that’s strong defensively and might have an elite special teams unit. If the offence can make contributions and not end too many drives in field goals, they’re better than they’ve been credited for thus far. That said, it has to be seen on the field first. Doing that at Mosaic Stadium against a 2-0 Riders team that’s already playing extremely well feels like a tall order.