TORONTO — If the opening week of the CFL season taught us anything, it’s that this might be one of the more unpredictable seasons we’ve dealt with.

Just one member of our esteemed panel emerged from Week 1 with a winning record. Marshall Ferguson, he who breathes, eats, sleeps and dreams all things CFL, went 3-1 in his picks. Not even he could be spared from the bend-but-don’t-break Ottawa defence and the sticky-fingered Abdul Kanneh.

Truthfully, Week 2 could be something of a crapshoot, too. Teams will improve their chemistry and their understanding of what they’re doing on the field together week-by-week. In the meantime, we get to sit back, enjoy the randomness that may unfold in front of us and try not to pay too much attention to the knots in our stomachs that tighten with each surprising finish.

You can get your own picks in at CFL Pick ‘Em presented by TotalEnergies. For info on rules regarding streaks and prizes click here.

RELATED
» Nye’s Weekly Predictor: Betting on the Argos
» CFL Pick ‘Em: Make your picks for Week 2!
» Cauz: I went 0-4 in my picks and my soul isn’t crushed 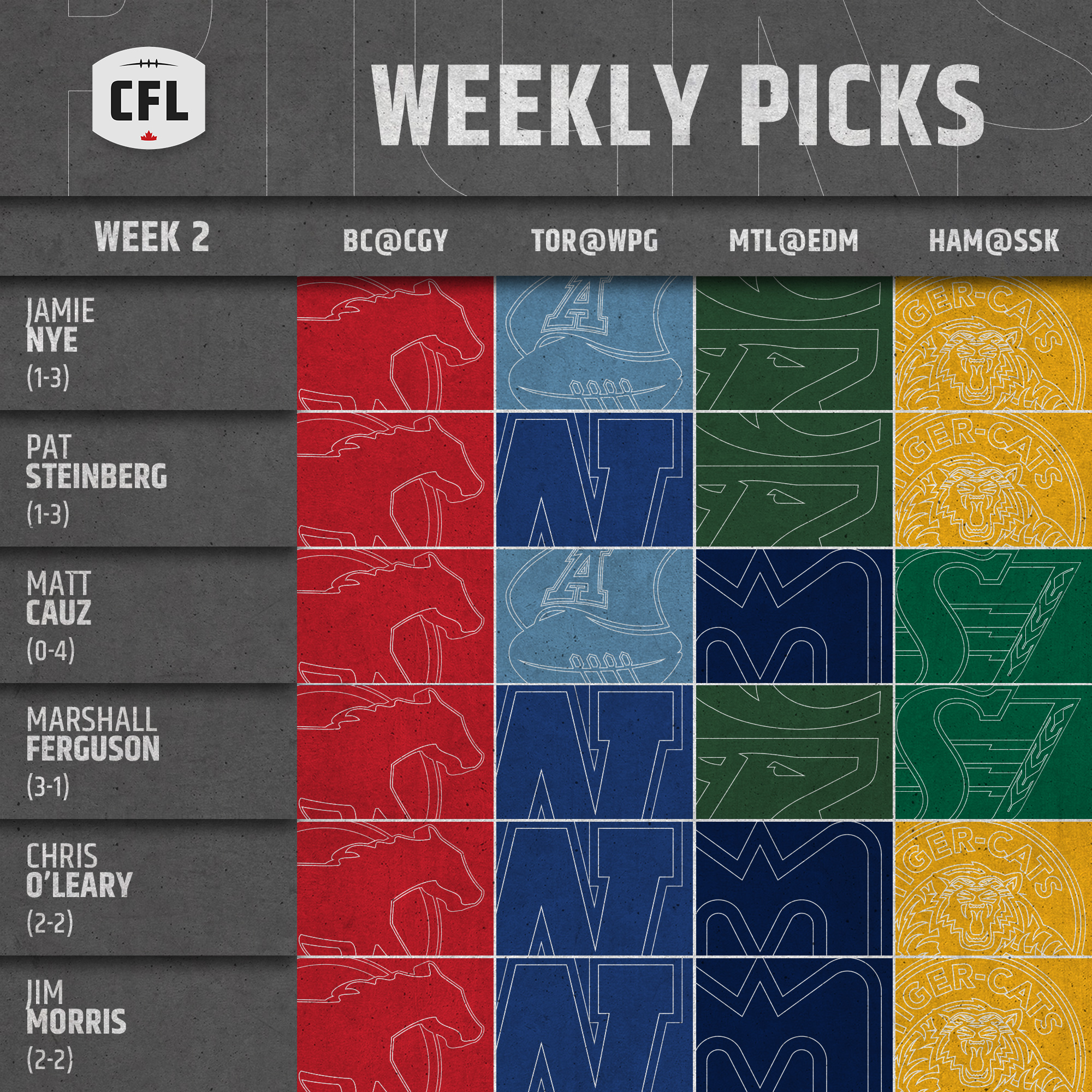 Nathan Rourke is listed as the starter this week for the Lions and while that’s a great story for the rookie Canadian quarterback, it doesn’t instill a lot of confidence in the decision-making process for picks. The Stamps are historically a tough team at home and coming off of something of a surprising loss to the Argos, we don’t see them dropping a second straight game at McMahon to an undermanned BC squad.

The Argos, with all of those new faces and names thrown together, were a pretty cohesive and poised unit in their debut, pulling out an impressive win in Calgary. They run into another tough challenge this week in Winnipeg, against a Bombers team that was plenty impressive in its own right in its debut.

Consistency has been an issue for McLeod Bethel-Thompson in years past, though he seems to have a much better group around him this season (assuming he starts again this week over Nick Arbuckle, who has been listed as limited again in practice this week). The Bombers may have their injury issues as well, with d-linemen Willie Jefferson and Jackson Jeffcoat missing sessions this week in Winnipeg. Still, after watching Zach Collaros play at the level he did against the Ticats, we have a majority going with the home team this week.

The Elks will be happy about the chance to get back on the field after a disappointing, touchdown-free offensive performance in front of their home crowd. If Trevor Harris and co. can get some finish in their game — the defence and kicking game were on point in the Ottawa loss — they’ll be tough to beat. Unfortunately for Edmonton, Vernon Adams Jr. and the Montreal Alouettes love being told they don’t have good chances in a game. The cardiac kids of the 2019 season make their debut and are eager to show what they can do. You can make some strong arguments for both sides and if you’re here looking for a solid choice on this pick…sorry.

Two teams with Grey Cup ambitions collide in our final game of the week, with the Ticats paying a visit to the Riders. While each side had different results in Week 1, they both dealt with halftime dropoffs in their performance. Will Jeremiah Masoli and the Ticats’ offence bounce back, or will Cody Fajardo and the Riders’ offence keep its foot on the gas the whole night, getting an always loud crowd at Mosaic to take it to a deafening level? The panel leans toward the Ticats rebounding to get back to .500.