TORONTO — At the end of what might be the most unique regular-season in CFL history, the playoffs are finally here.

It may feel strange to just have things getting started at this time of year, but the weather seems favourable for both Hamilton (2 C, chance of flurries) and Regina (7 C, sun and clouds), which we can take as Mother Nature meeting us more than halfway on some late November football.

The action on those fields should be enough to keep our thoughts away from the elements anyway. The Riders and Stamps have given us three great games this season, while the Ticats and Als may have provided us with a game of the year candidate on Oct. 2 in Hamilton.

The CFL.ca writers took an interesting approach on the two games. The majority are confident in the Ticats winning at Tim Hortons Field, but are less sold on the idea of the Riders defending their ground at Mosaic Stadium.

RELATED
» Head to Head: Who has the edge in the Eastern and Western Semi-Finals?
» CFL Pick ‘Em: Make your picks for the divisional semis!
» CFL Simulation: Stamps roll into the playoffs 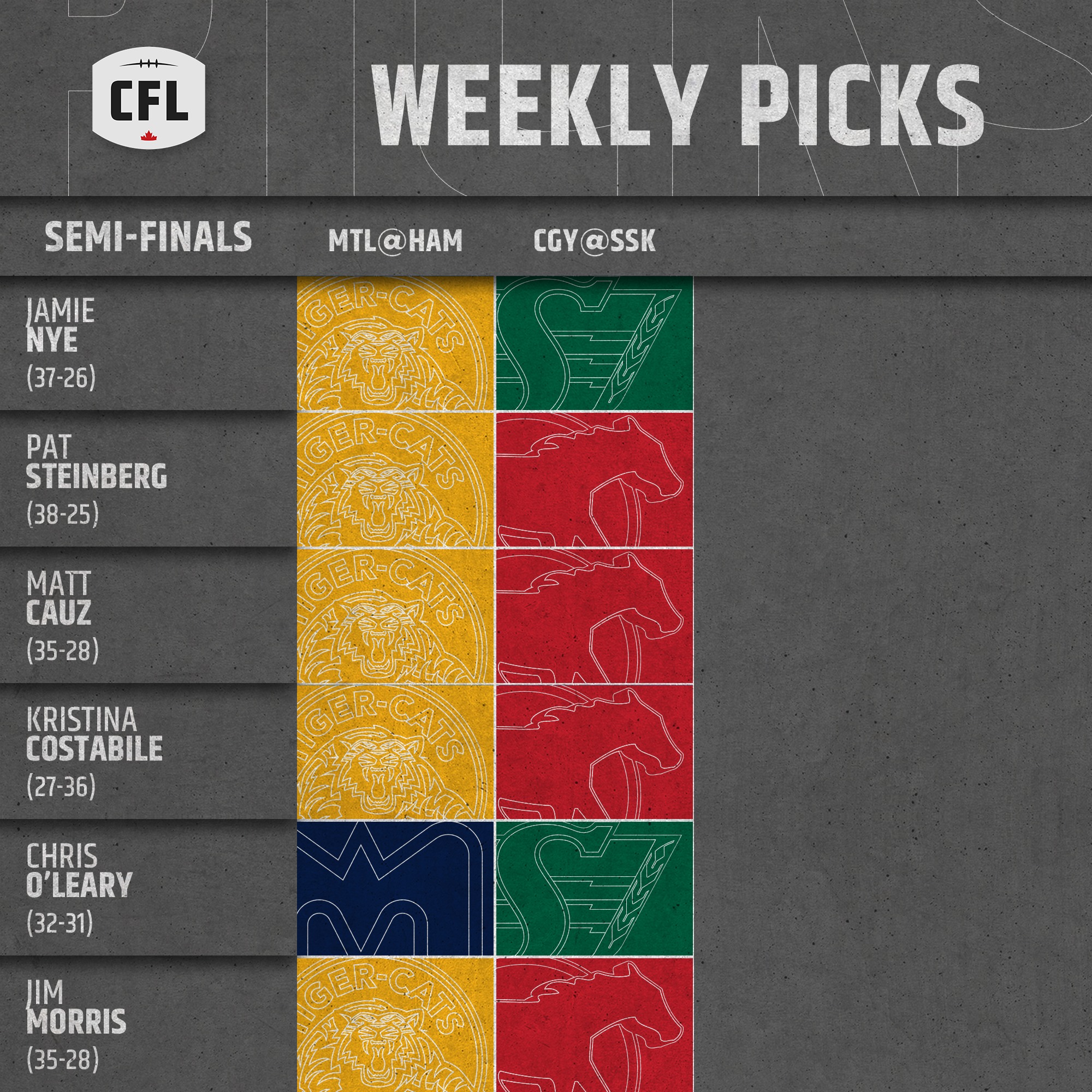 The X-factor in this game is ex-Elk Trevor Harris, who will get just his fifth start with his still fairly new team, with the Alouettes’ season on the line. Two years ago, we saw Harris put forth a masterful Eastern Semi-Final performance in Montreal against the Als. Can he conjure up something similar on Sunday? The Ticats will say no, perhaps remembering the fate that met Harris a week after that great performance, when they ran over the Elks to get to the Grey Cup. The Ticats haven’t been as consistent or as dominant this season, but have shown glimpses of it throughout this season in all three phases of the game. The writers think that, plus home field advantage, will be enough for them.

It’s something of a different story in Regina, where the Riders will play host on the heels of a nine-win season. The Green Team at home should be enough to sway people to their side in terms of picks, but they face a Calgary team that seems to have found its groove after a disastrous first half of the season. The pressure will be on Cody Fajardo and the Riders’ offence to produce against a Calgary team that while isn’t as veteran as it once was, still has Bo Levi Mitchell, is still coached by Dave Dickenson and has seen just about everything that’s possible in the playoffs. It was close, but the road team gets the majority from the writers here.