They say football is family.

For the Philpots, that’s literally reality.

Twin brothers Jalen and Tyson Philpot awaited their names to be called in the CFL Draft Tuesday night, anticipating the first time in a long time that they would be split up and playing on opposing teams.

The two spent the past few years suiting up as receivers for the University of Calgary Dinos and it didn’t take long for Jalen to get the news he wouldn’t be changing cities anytime soon.

With the fifth-overall pick, the Stampeders selected Jalen, with Tyson going ninth to the Alouettes.

“I’m so excited,” exclaimed Jalen. “Calgary definitely was number one on my list so just to be able to get drafted there, and go home and practice at McMahon Stadium is a dream come true.”

“Words can’t even express how excited I am.”

You could say the game is in their blood.

Their father, Cory, played running back for the BC Lions in 1993 and went on to win a Grey Cup against the Baltimore Stallions in 1994. He would later join the Winnipeg Blue Bombers before retiring in 2000. Cory also donned the nickname “Quick Six” during his CFL career – a name Stamps fans know quite well – and certainly a name that Jalen will be eager to see galloping down the sideline after a big touchdown play this upcoming season.

“Since I was a little kid watching my dad play and going to the locker room and being around those guys is something I really envisioned for myself (in the future). I’m so glad to see it come true and it’s an amazing feeling right now,” he said.

This will be the first time in 12 years that Jalen has been on a team opposite Tyson.

“Montreal got a really good football player. I know Tyson’s going to be able to go out there and do what he does, and compete at the highest level.

“We’re both just super proud of each other and excited to be checking the league stats every week to see who is doing better at the stat mark.”

It’s fair to say the calendars in the Philpot household have already been marked. It won’t be long until the brothers meet on the field as the Stamps host the Als in the first game of the CFL season on June 9. You can buy your tickets here.

“I think that’s going to be so dope to be able to play against each other in our first CFL game,” said Jalen. “It’s going to be a battle right away. I’m excited to get out there, hopefully get the edge and get the W, and it’ll be all love after the game.”

Although he won’t be seeing his brother around McMahon any longer, there are plenty of familiar faces in the locker-room. The Stampeders currently have nine former Dinos on the roster, most of which Jalen has met or played alongside.

“I was teammates with Charlie Moore and Nick Statz. I know Elie Bouka and Richie Sindani. I also know Colton Hunchak, I know he didn’t play for the Dinos but I’m pretty close with him. There are lots of guys I’m excited to go out there and be teammates with, it’s so awesome.”

Jalen is also no stranger to the Red and White coaching staff. He’s spent some time with Dave Dickenson and company in the past.

“I’ve actually ran a Dave Dickenson football camp so I’ve got to meet Dave and Marquay McDaniel and a couple other coaches,” he explained. “The vibes I was able to get from them on the camps was something I really wanted to be a part of and it really drew me to the Stampeders organization.”

Former Calgary Stampeders receiver (2008-2009, 2010-2015) Jabari Arthur served as Jalen’s receivers coach during his time at the University of Calgary. 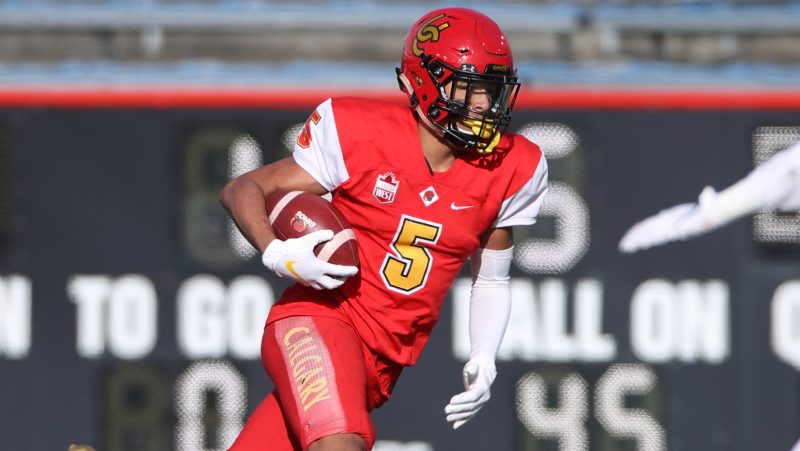 A two-time All-Canadian with the U of C Dinos, Jalen Philpot will look to be a Day 1 contributor in any way possible for the Stamps in 2022 (David Moll/Calgary Dinos)

Wondering what to expect from the Stamps’ newest addition? Arthur gives you his answer.

“Jalen Philpot is a fierce and unbelievable competitor,” Arthur said.

“He’s one of those guys that no matter what the competition is…no moment will be too big for him. He is a guy that has a mind for football and he’s going to be a super dynamic, super explosive (player). Get ready for some spectacular plays and some jaw-dropping catches.”

Arthur is confident the transition from USPORTS to the CFL will be a seamless one.

“(Marquay and I), we’ve learned a lot together and I think some of the things I’ve been able to teach Jalen along the way is going to be reiterated with his coach there. I think he’s going to go into a great situation and I’m so happy for him.

“Obviously, I’m a little bit biased for a long time thinking that the Calgary Stampeders organization is one of the better organizations across the CFL. They drafted me and they are part of the reason why I call Calgary home. I have a great respect for everyone that works there.”

The love between teacher and student goes both ways.

“Jabari Arthur has been huge for us and I really give a lot of thanks to him and I think he’s part of the reason why we’ve been able to go in the first round here,” Jalen reflected.

Rookie camp cannot start soon enough for the 21-year old Canadian and he’s ready to prove himself to his teammates.

“The Stampeders are going to get a player that is willing to show up to work every day and give 110 per cent. I’m a big playmaker so I’m going to go out there and make big plays and do whatever I can no matter what – whether that’s on special teams, as a rookie, or if I’m able to edge out and win a starting job – I’ll do whatever I can to make my team win.

“Being back in Calgary is going to be so fun, I can’t wait.”