William Stanback sat at his home in New York, looked into a group chat on his phone, saw some familiar media faces in Montreal and smiled.

A member of the Alouettes again after signing a two-year deal on Monday, Stanback hasn’t done that as much as he would have liked to this year. It’s mid-December and like many of us, 2020 has taken its toll on him. The year has been a wild swing of highs and lows, on and off of the field.

On New Year’s Day, the Als released Stanback so he could pursue NFL opportunities and he promptly signed with the Las Vegas Raiders on Jan. 3. In July, he watched his world crash down around him. His father, William Sr., lost his battle with bladder cancer on July 21. Nine days later he lost his mother, Patricia, to a heart attack. The Raiders would waive him on Aug. 23

“At the time I felt I was in a real dark place,” Stanback said.

He was close with both of his parents, and while his mom initially worried about him playing a contact sport, his father was his rock and sounding board for his journey into football. 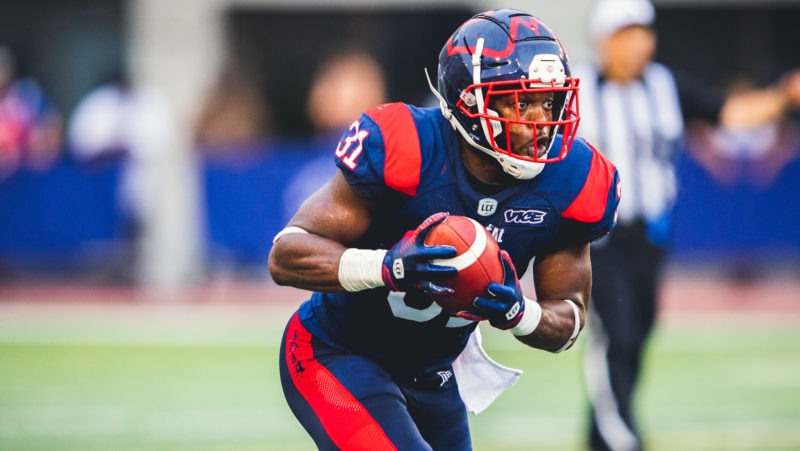 As a 1,000-yard rusher in 2019, Stanback was a key piece of the Als’ remarkable season that ended a five-year playoff drought (Dominick Gravel/Montreal Alouettes)

“I remember one of the last things he would tell me, he said, ‘Wherever you end up,’ and he wasn’t being specific, ‘Make sure you play with pride, make sure you play your heart out, and you give it all you got every single time you touch that field. You never know what’s going to be your last down, your last game or your last season,’” Stanback said.

“I just always took that to heart, everything he said to me. I look back at our text messages and I just see some of the old things we would talk about and I don’t think I could stop right now, at all.

“He’s with me every day, my mother’s with me every day and this is what they wanted me to do. They wanted me to continue to play. They didn’t want me to feel sorry and stop and quit, feel terrible. I’m going to celebrate their life. My parents were great people, to a lot of a lot of people. I get emotional a lot and I’m a real emotional person. I’m not going to stop though. Because this is what they want me to do.”

He didn’t hide those emotions on the call. He said he leaned on his two brothers to deal with the loss and the grief that came from it, which strengthened relationships that weren’t always the best as they grew up. Through the lows came more highs. With the news of the loss of his parents, Stanback found out that he and his girlfriend are going to have a child. Their daughter is due in March.

“That’s what helped me get through it, because I wasn’t alone,” he said.

“I think family being around and knowing that I’m not alone and the thought and the fact that my daughter will be here in the beginning of 2021 is what helped me get through everything.”

While his NFL options didn’t pan out the way he’d hoped, Stanback always looked at Montreal as the first place where he was able to play professional football and he appreciated that. He was with the Alouettes for two years and had a breakout 2019 season, breaking the 1,000-yard rushing mark, being named a CFL All-Star and helping the team back into the playoffs for the first time in five years.

“Clearly, I’ve had a couple conversations with William here the last few weeks and he’s expressed a desire to be in Montreal, this is where he wants to be,” Als’ GM Danny Macciocia said.

“He’s got some unfinished business here and I expressed the same desire that I wanted him back and our coaching staff was extremely excited about making him a priority here in the next little while. When I had the chance to sit down with his agent, we gave ourselves a week, but..I think it took a total of two or three days to come to an agreement.

“This is a great step. This is an exciting day and this is something that I think our fans in Montreal are excited about.”

It’s something that Stanback is excited about too. He grew up in New York and the people of Montreal felt vastly different to him when he arrived in 2018.

“Everyone’s friendly. I’m from New York where everyone’s rude and mean and stuff like that. It’s crazy where I’m from,” he said.

“Sometimes the first place you’d go (as a pro), that’s the only place you want to stay and you never want to leave. I went and I had my time with Green Bay and with the Raiders. It was a little different because you might like Vegas a little bit better than Wisconsin but I like Montreal better than Vegas, as In the city and the people in general.

“I just love how warm they are. I met a lot of people from just going out, the nightlife or going out to eat. Everyone’s just respectful and I never really got that everywhere I went.”

He noted the bond that the 2019 Alouettes had and the fun, successful run they put together  and how he stayed in contact with some of those teammates through this whole year.

“It makes me feel like this is where I need to be. Hopefully, you know, if it comes to it I can end my career here,” he said.

He thinks the Als can get that back together in 2021 and continue on and win a Grey Cup. It’s what he thought of when he was waived by the Raiders, that he wanted to come back to Canada and finish that journey with this team.

“That was my whole mindset, to come back and try to win this Grey Cup, because I know we can do it. I know we can.”