Whenever we get into football draft season, I always think of the players that a combine may not favour.

It’s easy to fall in love with a fast 40-yard dash, or with dominance at the bench press. Sometimes it’s a telltale sign that you’re looking at a can’t-miss prospect. Other times, you’ve simply got the numbers of a great athlete that may not perform as well at the pro level.

At a traditional combine, the athlete that doesn’t test well at least has the one-on-one component to speak for them and to sway scouts’ opinions of them. Of course with the pandemic, we haven’t seen a traditional CFL combine in over a year. Add in the fact that there was no 2020 U SPORTS football season and there’s a large window created for players that shine on game day but not so much under a stopwatch?

“Every draft class certainly has some of those guys,” TSN’s Duane Forde said this past week on a pre-Draft media call.

“The challenge this year goes back to the fact that there’s not that same opportunity for scouts to see as much game film — especially recent game film — where you’re sort of mature and closer to the finished product.

MORE DRAFT COVERAGE
» Everything you need to know ahead of the 2021 CFL Draft
» Draft Tracker: Follow along on May 4
» Mock 2.0: Who will Hamilton take first overall? 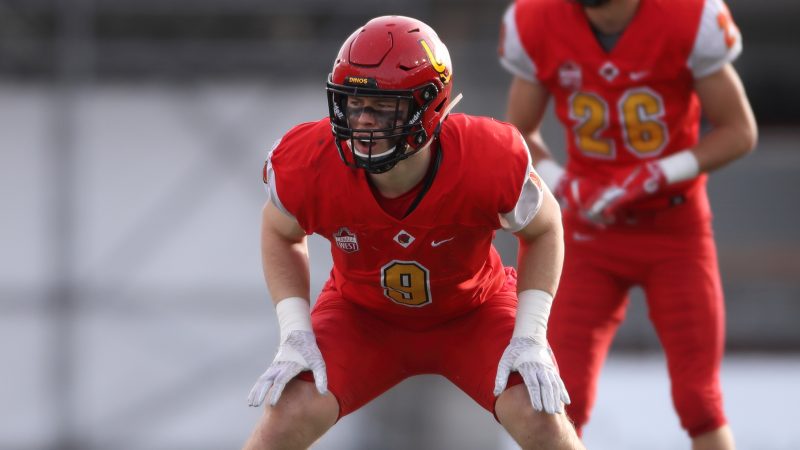 Calgary linebacker Grant McDonald is one player that CFL.ca’s Marshall Ferguson sees as someone whose tape speaks louder than his testing results (Photo: University of Calgary)

The 2020 and 2021 Draft have tested talent evaluators in ways they’ve never been tested before. CFL.ca’s Draft expert Marshall Ferguson joined Forde on that media call last week and said that scouts and GMs across the league will have had to dig deep to make their draft decisions but that they’ll be ready.

“For me, three guys who have pretty good game tape that I don’t think tested in a way that would make your eyes jump and go, ‘Wow, we have to watch more of this guy,’… (are) Grant McDonald from Calgary, Kean Harelimana from Laval and Myles Manalo from Western,” Ferguson said.

“Those are all guys that you can put on your roster pretty quickly and have success with. All the way down the line, you can see guys like even Nelson Lokombo didn’t test as well as I thought that he might have, based on watching him play football. It doesn’t matter. He’s still super athletic.

“He’s still maybe slightly undersized, which might be a bigger challenge than his testing, but the actual testing numbers I don’t think are going to matter as much. If you’ve done your homework, and all of these teams have done their homework and they pride themselves in that. You’ll see a couple of players that didn’t test the way they wanted to but if they get into a training camp and get their shot it will be very quickly forgotten about.”

When Forde thinks of players that haven’t tested well and gone on to great careers, he goes back to the 2011 draft. Craig Butler’s numbers weren’t remarkable, but his one-on-ones were.

“As you guys know, one-on-ones, receivers versus DBs, are very much in a drill that favours the offence. Defensive guys aren’t going to go above .500 in that drill. Craig Butler killed all the receivers in that drill, won every single one-on-one and absolutely dominated guys and ended up going in the second round,” Forde said.

“But if all you have is Craig Butler’s test scores without seeing him perform in-person against the best guys and having that as much film and things like that, there’s no way Craig Butler goes in the second round of that draft.” 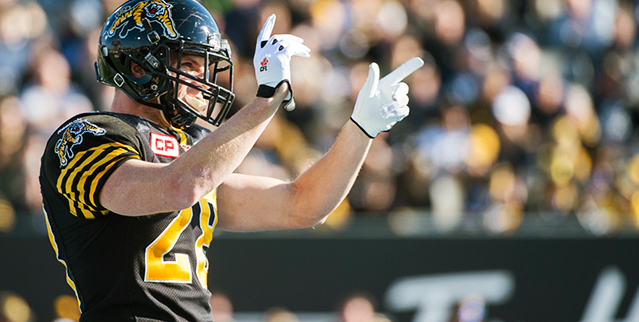 Craig Butler’s testing numbers didn’t separate him from the pack in the 2011, but his one-on-one’s did. He enjoyed a seven-year career before joining the Ticats as a coach (Adam Gagnon/CFL.ca)

In the 2017 Draft, Jordan and Justin Herdman-Reed faced a similar circumstance. They weren’t expected to test exceedingly well, but were excellent players at Simon Fraser University. Both went late in the Draft — Justin 54th overall and Jordan 60th — and both have built solid careers in the league. After playing apart for the first time in their lives the first three years of their career, they both signed with Saskatchewan in February as free agents.

“You only need one team to like you,” BC Lions scout Geroy Simon told the Vancouver Province in March of 2017, speaking of the brothers.

“Their testing numbers really don’t match up to their ability. So, the testing can’t be the only thing you look at with these guys. When you see them on the field, they look fast. They play fast. And they play physical.”

Because of the lack of recent film, Ferguson figured that teams draft boards could be vastly different across the league. While it may take years to evaluate a team’s success in any draft, looking back a few years from now at who teams chose and where in 2021 will be a very interesting experiment.