Like many CFL hopefuls, Tyrell Ford’s days are packed with workouts and time spent with trainers as he looks to maximize his performance at this month’s national combine.

Where Ford, a six-foot-one, 194-pound defensive back from the Waterloo Warriors differs, is that his football training isn’t all of the work he’s doing. A member of the school’s track and field team, Ford has been doing some double duty this winter. Over this past weekend, he broke up that combine training when he took part in the Don Wright team challenge at Western University.

Ford runs the 60m dash and put in a personal best time of 6.88 seconds in a meet in Toronto last month. For someone that could soon be making his living in pass coverage on the big, wide fields of the CFL, that’s only helped him.

“I’m not doing too much, but I’m taking the most important parts from each sport and putting it together, to be the best athlete I can,” Ford said on a recent Zoom call.

“For the football training, the combine training, it’s a lot more agility and power, which is something that obviously playing football for so long I’ve excelled at.

“Track is more…it’s definitely more top-end speed. It’s all about being relaxed and smooth when you’re running, rather than being powerful and I think that’s one of the biggest takeaways that I’ve gotten from practice here. It’s definitely helped me when I’m running my 40. My last 20 yards is way better than it was a while ago. It’s definitely impacted me positively.” 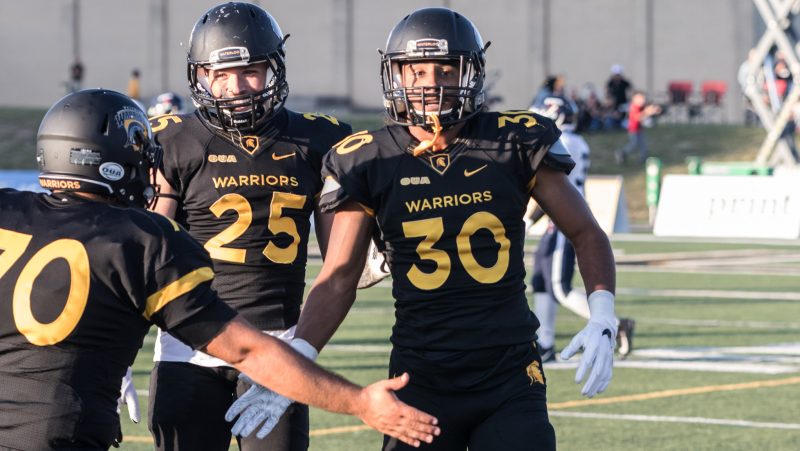 A three-time OUA all-star and a two-time second team All-Canadian, talent evaluators across the country are interested in Tyrell Ford (Photo: Jon Halpenny)

Ford will try to bring that top-end speed to the pro level of football. A two-time second team All-Canadian at Waterloo, Ford is also a three-time OUA all-star. He had 18 total tackles in 2021, an interception and two pass breakups. Add in that he has some return capabilities as well and talent evaluators across the country have liked what they’ve seen from Ford through his career. He was the No. 9 prospect in the winter edition of the CFL’s Scouting Bureau rankings.

The two have grown up playing football, mostly together. Tyrell recalled one season of touch football when they were six years’ old as the last time they weren’t on the same team.

“We joined late, so we had to be on different teams,” Tyrell said. “They put us on the two worst teams and then we ended up playing against each other in the championship. I don’t remember who won but that’s the only time we’ve ever played on opposite teams.”

The odds are against them landing on the same squad in May’s Canadian Draft, so Tyrell is letting his competitive instincts guide him as he plots out he and his brother’s football careers. Asked about how they’d fare as opponents, Tyrell was confident he’d come out on top.

“I’m definitely going to go with (the scenario of) I get an interception first, probably for six because I don’t think he can tap on me either,” he said with a smile on his face.

“I’m just saying, his whole career I don’t think he’s thrown a touchdown on me. So it’s not a first, it’s just not going to happen. I’ll be ready. And he knows that.”

Ford heads into the national combine from March 25 to 27 – the Ontario and Quebec regional combines get underway this week – feeling as though he’s as ready as he could possibly be, despite coming through a challenging couple of years. 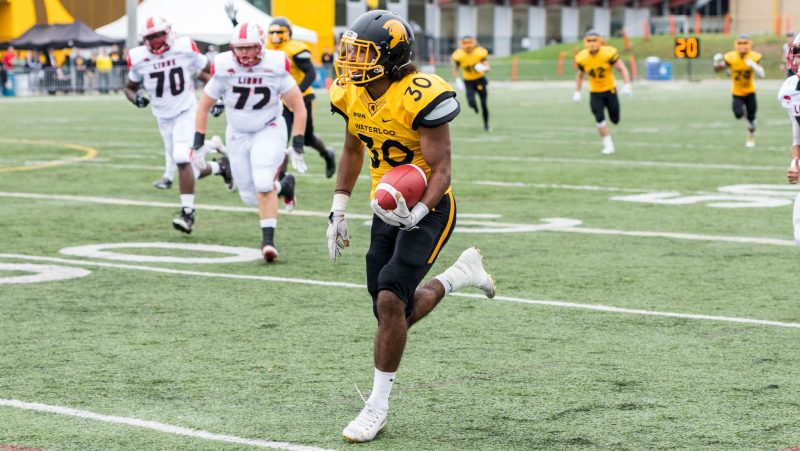 He hasn’t faced his brother Tre as an opponent often, but Tyrell Ford is confident in his ability to get his hands on a pass and run it back (Photo: Jon Halpenny)

The pandemic first limited gym access then eventually cost U SPORTS and the CFL the 2020 season. While both organizations got back on their feet for 2021, there were still restrictions that made the once simple aspects of training more difficult. Ford took those challenges on headfirst.

“It might sound crazy, but I think Covid actually helped me. I have a very supportive girlfriend and I live with her family when I go back to Niagara Falls, my hometown,” Ford said.

When the season was cancelled and classes were online, Ford was able to use the basement of the house to make it a workout room. There was a brand-new turf field down the street from him, which let him do drills and work on his 40-yard dash.

“Over Covid I definitely started working a lot more consistently,” he continued.

“Then as soon as we came back for our season (in 2021) I think it definitely helped because I was definitely bigger and stronger. But I don’t think I was necessarily as fast as I was before. But now I feel like I’ve lost a little bit of weight. I’m like, 193 194 around there. I feel powerful, smooth, fast. And it’s just the best I’ve felt.”

Ford wants to show off his speed at the end of the month but he’s just overall excited about the combine as a whole. He loves the competitive aspect of the one-on-ones and he’s excited about interviewing with teams across the league. While that aspect of the combine can often be the most unpredictable, he seems to be comfortable in his own skin and honest, which should carry weight with the GMs, coaches and team executives he might cross paths with.

“There’s definitely some questions I think you have to be prepared for, especially football-specific questions, like plays or terms and concepts and stuff like that, being ready for that stuff,” he said.

“But I really just go into it…I just want to be myself and I want them to get to understand the person I am so you know, no false advertising.”