If you’re looking at a career, why not choose one that contains multiple versions of Christmas Day throughout the year?

That’s how Ryan Rigmaiden, the freshly hired director of U.S. scouting for the BC Lions, describes his job.

“I love going to some of the smaller schools that produce talent. You add them to the neg list (negotiation list, the CFL’s primary means of procuring American talent) and watch them develop. Then at some point you sign them and you get them on the field.

“I’ve always said it’s like Christmas morning. You’ve got this big package and you’re excited about it but you don’t truly know what it is until you open it up. Some of these players, until you get them on the field, sometimes they surprise you both in good and bad ways. It’s the way (scouting) goes. It’s very exciting and it’s part of the drive that keeps me going.” 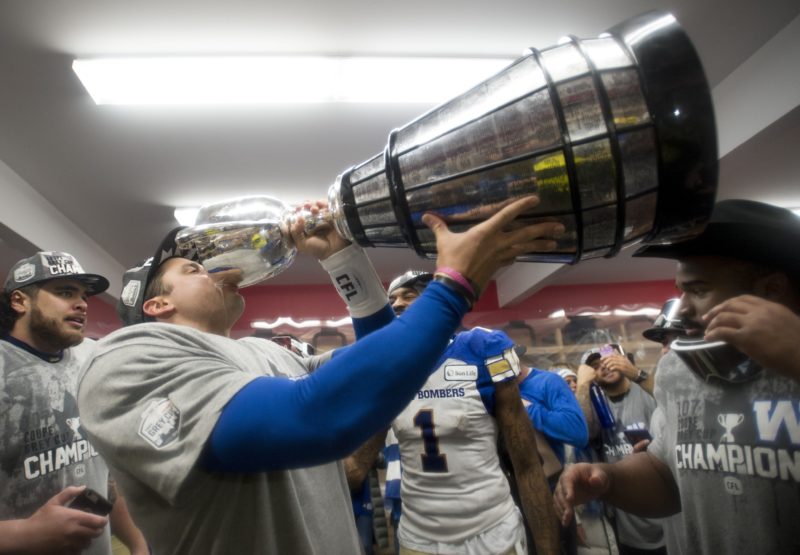 As the director of college scouting for the Blue Bombers, Ryan Rigmaiden helped find talent for the team that ended its 29-year Grey Cup drought last season. (THE CANADIAN PRESS/Nathan Denette)

Rigmaiden rejoins the Lions after spending the past three seasons with the Winnipeg Blue Bombers as the club’s director of college scouting. Before that, he was with the Lions from 2012 to 2017 as their director of U.S. scouting. The Spokane, Washington native is happy to be back in the pacific northwest area, calling it his football home.

“It came on quick. I got a call from (Lions president) Rick Lelacheur) saying that BC had the desire to reach out,” he said.

“I was excited to get that opportunity. Being from Spokane, I love that region. I had some great years with BC, kind of my formative years. A lot of great memories, a lot of fond times. I met some great people and a lot of those people are still there.”

He said going to Winnipeg — making moves to any new organization, really — was good for his professional development.

“Every team does things their own way and you’re always going to find good things and things you wouldn’t do,” he said.

“In Winnipeg, I was so fortunate to work with Danny McManus, Ted Goveia, Mike O’Shea. You could get in their heads a bit and show them how you do things and you could bounce ideas off of them.

“If it’s scouting or coaching, if you stay in one place too long things get stale and it was time for me to leave a few years ago in BC. I came to Winnipeg and fortunately we had some tremendous success and hopefully we can take that success that we built there and bring it to BC.”

The pandemic has of course altered the way that football scouts do their jobs. In the U.S., there’s college football to watch and NFL camps and rosters to monitor. In-person scouting is limited and the rules around that change state-to-state and sometimes even within that, change week-to-week as cases rise around the world. It’s left Rigmaiden doing one of his favourite things, deep diving on film.

“In one sense things are kind of going back to the purity of watching film, (making) grades and making reports,” he said.

“You’re starting to see this year you were able to go to games, so it was nice to get out…and gather info like you’re used to. Unfortunately you can’t do that again now. We’re doing the best we can. I’m a film junkie, so I think it’s an advantage. The best thing we can do is just keep plowing ahead and once we get more information we can add to that report. It’s not ideal but we’re all in the same boat together, so we’ll make the best of it.”

Rigmaiden returns to a BC team that’s undergone it’s share of change. In the wake of the departure of GM Ed Hervey, head coach Rick Campbell is working closely with the Lions’ football operations staff, headed by Neil McEvoy, to handle all GM duties. He’ll see some familiar faces with the club, but he’ll have to get to know Campbell. A fellow Washington state native, the two at least have that in common.

“I had known Rick through all of his years of coaching and had seen him on the sidelines but I still haven’t met Rick,” Rigmaiden said.

“We’ve talked on the phone a few times over philosophy and fit and to make sure we’re on the same page. I think that’s the most important thing when you’re talking about the collaboration of scouting and coaching worlds: Everyone has to have the same idea, you have to be on the same page.

“When I was talking with him it was refreshing. Philosophically we’re lined up. Neil’s been a great friend over the years. We were friends before I went to BC when I was in Spokane and that friendship has blossomed over the years. I have a lot of respect for him, I think he’s tremendous at what he does. With Neil and Rick and Geroy (Simon) and the scouts that are on the staff and soon to be hired, I think it’s a great staff. I’m tremendously excited to be back.”