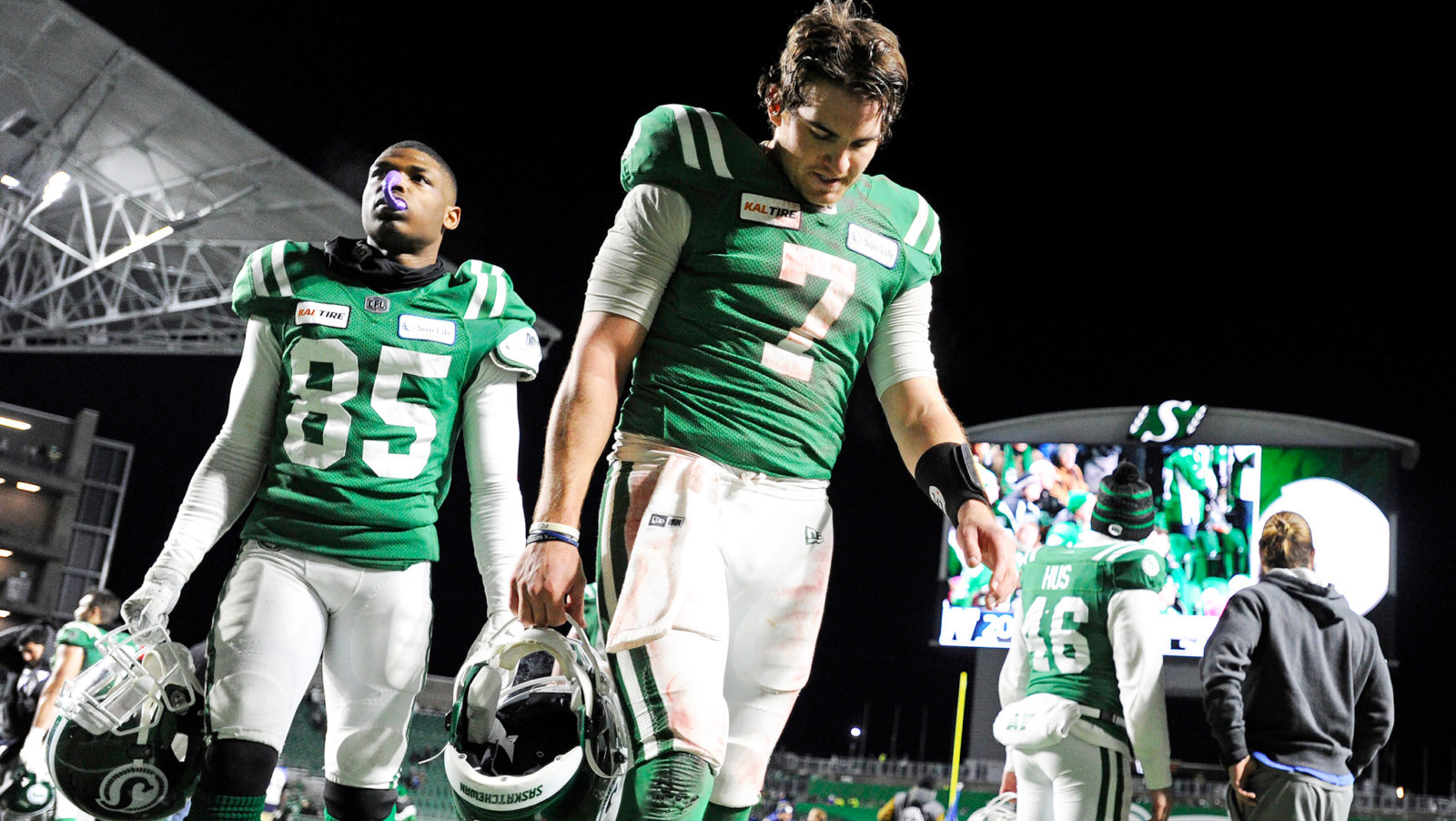 At 8 p.m. ET, Ricky Ray and the Toronto Argonauts punch their ticket to the 2017 Grey Cup. At 11 p.m. ET, the Winnipeg Blue Bombers do the same in 2019. Both wins come at the expense of the league’s most beloved team.

Each game came down to pivotal moments. In Toronto in 2017, Ray found then-rookie James Wilder Jr. for a crucial third down play to keep their game-winning TD drive alive. In 2019, Cody Fajardo looked to the end zone against the Bombers only to find what the Regina Leader-Post would call the ding heard around the province. Fajardo’s would-be TD was disrupted by the crossbar on the uprights. Dead ball. Game over. A familiar song plays again.

Through their 110-year history, the Riders have learned to cozy up with heartache like few other teams in the CFL. In that long span, there are bigger sources of pain than the losses suffered in 2017 and in 2019. Tony Gabriel haunts Saskatchewan, depriving the province of Grey Cup wins in 1972 and 1976.

Ted Provost, who was defending Gabriel on his Cup-winning TD play in 1976, is quoted in Rob Vanstone’s book 100 Things Roughriders Fans Should Know and Do Before They Die as saying, “One damn play and it ruins the whole season.”

Then of course, there’s The 13th Man. The flag that cost the Riders a Grey Cup was thrown more than 10 years ago and as Vanstone points out in his book, Gabriel was there in the stands that night in Calgary, watching Rider Nation’s heart collectively break in devastating fashion.

Looking back at that 2017 loss, the Riders were in tough on a number of fronts. They’d crossed over into the East and were trying to become the first team to qualify for a Grey Cup in that fashion (note: despite an almost annual crossover in recent years, it still hasn’t happened). Despite a healthy dose of green in the crowd at BMO Field, the Argos had become the team that everyone hopes to be at this year: They’d put a middling record behind them and gotten hot. They had the perfect combination of a veteran, HOF-bound quarterback in Ray and a coach that had been there numerous times in Marc Trestman. Wilder had caught fire, adding an unpredictable element to the offence and Corey Chamblin’s defence was aggressive and opportunistic. We’d see all of that pay off a week later in the Argos’ stunning Grey Cup win over a heavily-favoured Calgary team.

The 2019 loss feels like the more painful of the two. Fajardo had been dealing with a serious oblique injury and was questionable to play in the days leading up to the West Final. At Mosaic Stadium, the Riders’ offence struggled against Richie Hall’s defence all day, failing to find the endzone. Whenever Saskatchewan appeared to have a shot at getting the crowd of 33,300 to its feet, the Bombers found a way to keep control. Nick Marshall’s near punt return TD in the fourth quarter was the perfect example. Marshall looked to be in the clear, with the Riders trailing by seven with five minutes to play. Bombers special teamer Shayne Gauthier made up the ground and made what might have been a game-saving tackle.

Despite Winnipeg leading almost the entire way, the game felt like it was there for the Riders to take, if they could just get that one thing to go their way.

Then, with the clock at zeros and Saskatchewan trailing 20-13 with four seconds left, Fajardo looked to the end zone.

“I told coach, the crossbar is 80 per cent air and 20 per cent iron,” Fajardo said after the game, with Craig Dickenson seated next to him. “And I hit it.

“I remember hitting that thing and the stadium was dead silent. I could just hear the echo of the iron when the ball hit it.”

History has been unkind to the Riders, though their fortunes have changed somewhat over the last few years. After just two Grey Cup wins (1966 and 1989), the Riders have doubled their count, winning in 2007 and providing an all-time moment for their fans in 2013, winning it at home, four years after that devastating loss in 2009.

There’s something special about the teams that win it so rarely, that overcome their rivals, the obstacles, sometimes themselves to finally lift that trophy. Every fan hopes for a dynasty, but when the teams that seldom get to taste the champagne finally do, it feels a little more significant. We’ve seen it just in the last year with the Toronto Raptors, the Kansas City Chiefs and with the Bombers, who ended their 29-year Grey Cup drought after getting past the Riders.

Fajardo is determined to put the heartache behind him and the Riders fan base.

“Stay with us,” he said at the podium at the end of the Riders’ 2019 season. “I know it’s tough now but the future looks bright.”