Our CFL Game in 40 this week is the 1976 Grey Cup. The finish to this game is one of the iconic plays in Grey Cup history and while I won’t spell it out for you here on the off chance that you don’t know how it ends, I assume we all do.

It’s a play that comes up whenever all-time great ones in CFL history are brought up, but if you’re not of a certain vintage, there’s a good chance you’ve never seen more than the game’s conclusion before. This game took place on Nov. 26, 1976, a couple of years before I’d come into the world, placing me firmly in the only-seen-the-ending category.

So, with no games on our calendar this year, I took the time this morning to watch the game and give it a treatment that was impossible to put on it 43 and three quarters years ago: I live blogged it. Wait, can you call it live blogging when the game is that old? Let’s call it retro blogging and let’s start at the beginning.

RELATED
» CFL not to play shortened season in the fall
» O’Leary: Pinball processes no 2020 season and eyes up 2021
» Collaros, Bighill assessing next steps away from field
» O’Leary: Als confident they’ll be back stronger in 2021 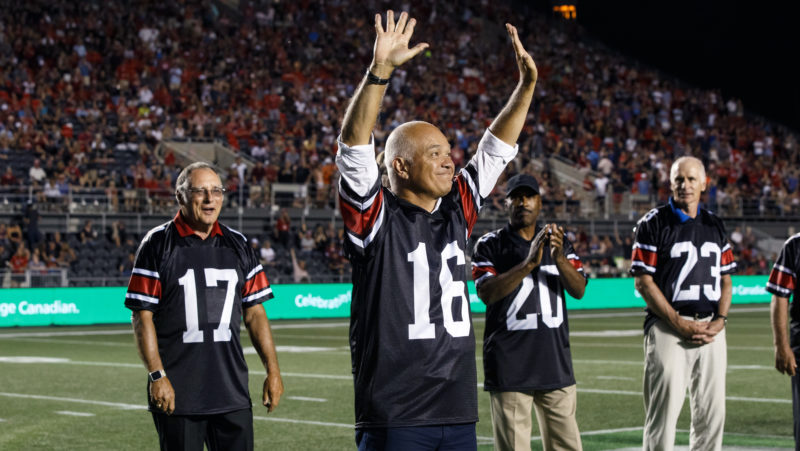 The play is a little overshadowed by Tony Gabriel’s catch, but Bill Hatanaka made a huge contributions on special teams for the Rough Riders with the first punt return TD in Grey Cup history (Photo: OttawaREDBLACKS.com)

From the opening seconds of our video…LOOK at Ontario Place. And Exhibition Place! I’m lucky enough to live near this part of Toronto, but now it looks nothing like it does in the opening shots of the game. Over the last few months, I’ve been on my share of walks and bike rides through here and I can say that it’s drastically different. Seeing these two shots made me feel like I was looking at Old Toronto on Instagram.

We need to talk about this intro: The swanky, upbeat kind of disco music in the background makes me feel like I’m watching the intro to a prime time action series or something. TSN, I beg of you to please give us the odd retro broadcast a few times next year.

We get a full screen photo of key figures in the game, while the funky background music plays. There’s MOP Ron Lancaster for Saskatchewan. Or the gamebreaker might be Tony Gabriel, Ottawa’s outstanding Canadian (spoiler alert).

Before kickoff, the sideline reporter talks about how the Grey Cup brings all Canadians together every year. He then laments the fact that we don’t yet have a team in the maritimes. “Maybe that can be cured one day,” he says.

The first time you hear both teams called the Roughriders (or Rough Riders, depending on how you want to hear it) after the opening kickoff is an all-time CFL moment.

In the first quarter, Wonderful Monds recovers a fumble and runs it to Saskatchewan’s end zone, only to have the play nullified. But we need to take a moment to recognize what might be the best name we’ve ever had in the CFL. Wonderful Terrific Monds played with the Rough Riders in 1976 and 1977, before getting a shot in the NFL with the San Francisco 49ers in 1978. He spent one more year in Ottawa in 1979 before retiring. His son Mario Monds played in the NFL and his other son, Wonderful the III played semi-pro baseball.

As Ottawa misses a 57-yard field goal attempt in the first quarter, I hear the in-stadium announcer doing a live call of the play. I don’t think I’ve ever seen that at a game I’ve been to in-person. When did announcers switch to getting fans up to speed after the whistle?

There’s another historical moment in this game that gets overshadowed by the finish. In the first quarter, Ottawa’s return man, Bill Hatanaka, ran back a punt for a 79-yard TD that helped put Ottawa up 10-0. It was the first punt return TD scored in a Grey Cup game. I met Bill a few months into my role with the CFL in 2017 and wrote a story about that play, his short-ish career and his life after football for our Diversity Is Strength initiative.

Anyone else notice the pouch on the front of Ron Lancaster’s jersey?

Another thing that stands out on the re-watch is how the end zones were marked for the big game. I’d love to see the league revisit that for a future Grey Cup.

With Ted Provost’s interception on Tom Clements — the first of three the QB would throw on the day — Saskatchewan announces its arrival to the party. A few plays later, Bob Richardson walks through an Ottawa tackle attempt and into the end zone and the Roughriders are up 17-10.

As Ottawa adds a 40-yard field goal to make it a 20-13 game, the announcers bring up the fact that only Canadians have scored points in the game. That held up the entire way,

How big was Bob Richardson? That’s a question I asked myself as he pulled in a pass in the third quarter. The Roughriders’ tight end stood six-foot-five and weighed 250 pounds. That explains why he was so tough to pull down to the ground.

Another Ottawa tidbit lost in the glory of the game’s final play: The role that special teams played in this game. Hatanaka’s touchdown and a fake punt in the third quarter that turned into a 51-yard gain for the Rough Riders both caught the Roughriders by surprise.

As the third quarter ends, Sask leads 20-13 and we go to commercial with a song that sounds a lot like Stevie Wonder’s Superstition and it makes me nostalgic for something I wasn’t around for yet.

The best (most likely accidental) neutral sign in the crowd makes an appearance to start the fourth quarter: Go Riders Go.

Another lost piece of info from the dying moments of the game: Ottawa had a turnover on downs very close to Sask’s goal line. Fans in Saskatchewan may have thought that was the nail in the coffin for Ottawa. 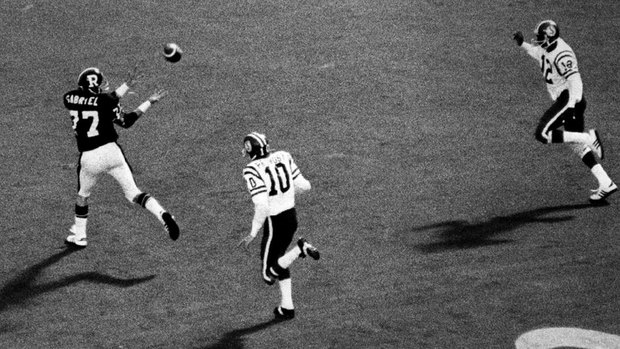 Tony Gabriel, wide open and about to pull in a history-making catch (Photo: The Canadian Press)

But, the football gods had a different plan in mind. Ottawa got the ball back and Clements found Gabriel once to get into scoring position and once more, shockingly open in the end zone for the go-ahead score. It was his seventh reception for 124 yards and given that his QB threw three interceptions in this game, I’m a little surprised that Gabriel didn’t get MVP. The Catch became a staple in Ottawa’s sports history and in the CFL’s. It was the Rough Riders’ final Grey Cup win and Ottawa’s last for 40 years.

You can see Gabriel spike the ball backwards over his head after he makes the play. In 2015, the CBC discovered the fate of that ball.

One last thought, as the hardware is handed to the Grey Cup champion Rough Riders: Look how small the Grey Cup was!