A group of reporters stood in a Calgary hockey rink on the morning of Dec. 12, shocked at what they’d just heard.

One by one, the news landed on the screens of their phones, bringing disbelief and reality together. Ricky Ray had been traded from Edmonton to Toronto, ending a nine-year stay in Green and Gold that saw the future HOF QB win a pair of Grey Cups.

As one of those reporters in that Calgary rink that morning — The Edmonton Journal and the Calgary Herald’s sports staffs were working together on coverage of the World Junior hockey championships, which each city hosted that year — I can tell you that the moment instantly felt monumental.

The day was pivotal for Edmonton, both in the team’s offices at Commonwealth Stadium and for a fan base that loved its team but seemed to share differing views on No. 15. Until Dec. 12, at least. 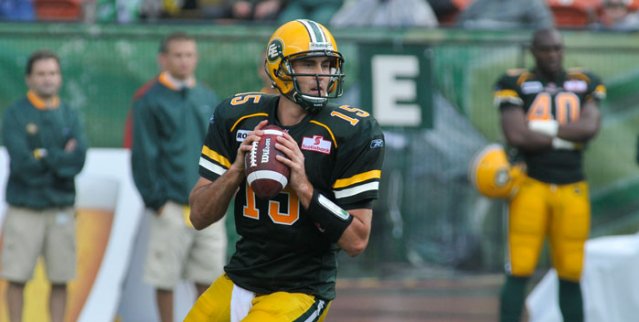 Some were critical of Ray’s style of play but the results — he won four Grey Cups — speak for themselves, while other teams look to have their QBs play similarly today (Photo: The Canadian Press)

It seems wrong to attach the following word to Ray, given his easy going personality, his team-first approach to the game and how grounded he was, but he was something of a polarizing figure with the fan base. Or, he was until that morning, when he was no longer Edmonton’s quarterback.

The 2011 season was my first one covering Edmonton full-time and the team made it easy on a rookie beat reporter. It ran off a 5-0 start and provided a cast of talented, interesting characters to write about all year. They went 11-7, tied for first place and hosted the Western Semi-Final before bowing out to the Lions a week later in BC.

Underneath that successful season was a narrative that I never fully grasped. It didn’t matter what story was published during that time. It could be something about a defensive player, or the coach at the time, Kavis Reed. It could be about something crazy that happened on a punt return, where Ray was as far removed from the action as possible. Regardless of topic, the comments that popped up were part of an ongoing debate on Ray’s game and his fit for the team.

The bulk of the criticism that landed on Ray was focussed on the way he played the game, making short, incremental gains up the field before the occasional long pass — or, in the case of the 2011 team, a big ground gain from Outstanding Canadian Jerome Messam — would break things up. The dink-and-dunk offences that Ray carried out just didn’t do it for some fans and they made themselves heard for years in forums, on Twitter and in the comment sections of newspapers’ sites.

That all changed the day he was traded. It felt like any anger or frustration that fans felt over Ray left town with his contract. It may have been the most instant example of not knowing what you had until it was gone. Ray’s absence wouldn’t be felt on the field for another six months, but the city agonized over it through the winter, leading into the 2012 season.

As Ray and his new team, the Toronto Argonauts began their journey toward a Grey Cup win that year, a shift had begun across the CFL that should have poked at the hearts of those that criticized Ray in his Edmonton days. It wasn’t just Toronto that played a Ray-style offence; as the decade rolled along, it became more widely adopted. With games from the 2010s available to us in the Grey Cup Portal powered by Mark’s, it’s something that you can go back and look at closely.

While we may never see a player like Ray again, one that was so consistently accurate through a lengthy career, we have seen a burst in recent years of players that have put up Ray-like numbers, rattling off high completion percentages, taking care of the ball and methodically leading their teams to victories.

The world of pro sports is one that thrives on duplication. Steph Curry is an undersized (by NBA standards) three-point heaving revolutionary with limitless range. Where he worked on his own in the early stages of his career, an entire league has followed suit, valuing the three-point shot over everything else.

As we move toward getting back on the football field with the CFL, it seems as though we’ll see offensive coordinators continue to model that Ricky Ray-like type of play in their quarterbacks. It will take a special type of player to pull it off, but we’ve seen versions of it from Bo Levi Mitchell, Trevor Harris and Jeremiah Masoli, who will put their unique spins on the game plan as offence in the league continues to evolve.

Ray has said over the last year that he’s interested in coaching, but wants to find the right time for it in his post-playing days. Given where offences are headed and Ray’s contribution to that, the idea of him helping shape an offence is a tantalizing one. Thankfully, his move to the coaching ranks won’t be met with a chorus of second-guessers.