A few random thoughts as the weekend kicks off…

When it comes to the possibilities of having a season this year, I’ve been following the advice that hockey people have espoused for years on basically anything you ask them: Trying my best to not get too high or too low, to stay even keel and control what you can control.

That the league has zeroed in on Winnipeg as a hub city location is one step in a long journey. You can’t put all of your celebratory eggs in one basket at this point. The where of this equation has been taken care of, but there are still other boxes to be checked off on the list.

That said, in watching the NBA’s gradual restart in Florida, it’s been strange to think about how there are 22 teams together in one place, competing. That’s something we’ve never seen in the CFL. The closest I can think of to a situation like this is the couple of years that we had star players from every team together for CFL Week in Regina and Winnipeg, but that came in the depths of the off-season, so there was no competitive feel to any part of it.

I remember being in Winnipeg for CFL Week in 2018 and running into Adarius Bowman, S.J. Green, Odell Willis and I think Charleston Hughes outside of MTS Place. It was strange to see players from four different teams together in one place. Assuming the players in the bubble would be able to interact with each other regardless of team, it’ll be interesting to see who spends time together and the friendships that might develop. Further down the road, could the relationships that are strengthened through a bubble season impact free agency in 2021 or beyond? 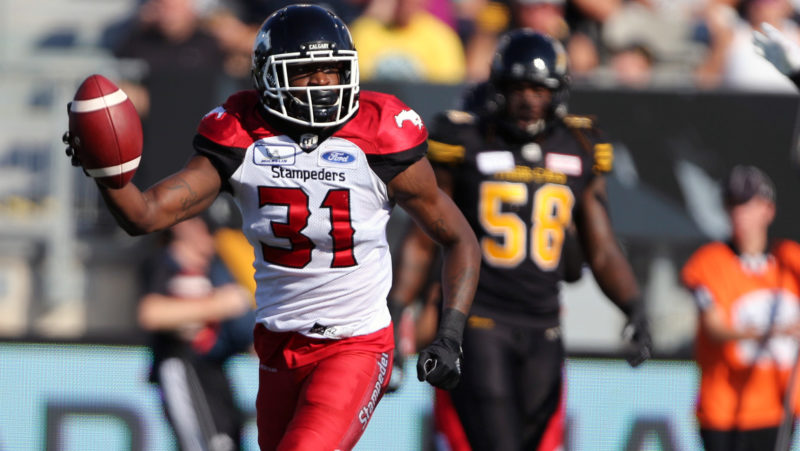 In normal, non-Covid times, this would be Week 7 of the 2020 season. One game that jumped out to me was Hamilton making the trip out west to see Calgary. These two teams almost always end up slogging it out when they meet. My colleague and once upon a time cubicle mate Kristina Costabile wrote about their tendency for the dramatic finish earlier this week and provided the nitty gritty of their last 18 encounters. As she points out, 10 of those games were decided in the final three minutes and in eight of the games, the margin of victory was less than five points.

Of course, the most memorable moment (sorry, Tre Roberson skying for a blocked field goal attempt to seal the win in 2019) comes from the 2014 Grey Cup, when Brandon Banks’ would-be game-winning return TD was called back. Sometimes when two teams meet, there’s just something in the air that makes almost every game a nail-biter. I’d assume that if they’d met on Saturday, we’d have seen another tight game.

The Ticats would get to embark on what’s in my biased opinion, one of the best road trips in the league. After their game in Calgary, they were scheduled to play in Edmonton next week. Most East Division teams take that week and stay somewhere in Alberta, with a stop in Banff, Lake Louise or Jasper as part of their down time/team bonding activities. The person missing that trip the most right now might be renowned Rocky Mountain enthusiast, Ticats play by play voice and CFL.ca contributor, Marshall Ferguson, who I assume we’ll lose one day to a secluded, peaceful life in a cozy cabin nestled into the side of a mountain.

Jeremiah Masoli was reduced to spectator status after his Week 7 injury last year, but that didn’t stop the Ticats from putting together a history-making season (Photo: The Canadian Press)

Sticking with Week 7 thoughts, it was a year ago this week that the Ticats’ season faced a crossroad.

Even though it was early in the season, when the Ticats hosted the Bombers it already had Grey Cup preview written all over it. That idea quickly went sideways when Jeremiah Masoli’s knee buckled and he went down in a heap. The MOP candidate and the leader of the Ticats’ offence, Masoli had torn his ACL.

Everyone watching the Ticats to that point held their breath as Dane Evans took over the controls of the offence.

A year later, we can say that it was completely unnecessary worry. Evans very smoothly took over the starting QB role, despite a very limited resume that saw him make 26 of 42 passes for Hamilton in 2018, for 383 yards, with two touchdowns and two interceptions.

The Ticats went undefeated at home, crushed Edmonton in the East Final and while they fell in the Grey Cup to the Bombers, Evans showed that he’s more than capable of leading a team at the pro level. He finished sixth in passing last year with 3,754 yards, making 298 of 413 passes (72 per cent completion rate), with 21 TDs to 13 interceptions.

More often than not, when your star QB goes down and your backup is that inexperienced, it’s the beginning of the end of your championship hopes. Evans and the Ticats bucked the trend last year.

***
If we get a season, here’s a player, coach and team I’m really excited to see get to work, with no explanation: