On May 3, the Edmonton Elks will make their own bit of history, when they make the first overall selection in the CFL Draft.

It will mark just the fourth time since 1985 that Edmonton will choose first. The team took running back Sean Millington in 1990, slotback Don Blair in 1996 and chose defensive lineman Adam Braidwood first overall in 2006.

Elks’ GM Chris Jones of course had nothing to do with those picks. He and assistant GM Geroy Simon head into the draft with plenty of options at their disposal and more than anything will just want to get the most out of the pick that they can. While the CFL Draft is different than the drafts of other pro leagues in North America, holding that No. 1 pick carries a similar pressure. There are 73 names that will follow Edmonton’s selection this year and over time, those picks are held up against that No. 1 spot.

Jones, Simon and the rest of the Elks’ football operations staff have been working and will continue to work around the clock to reach their final decision in around a week-and-a-half’s time. Here are a few options that are in front of them. 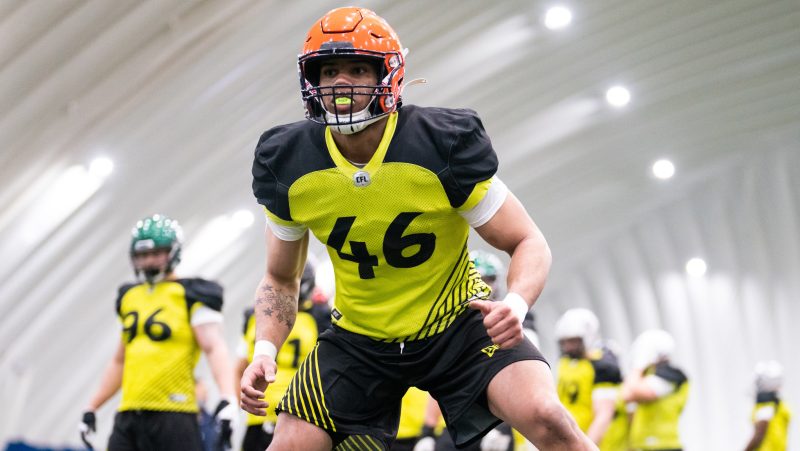 After an outstanding showing at the CFL Combine last month, versatile Syracuse LB Tyrell Richards seems like a strong fit with the Edmonton Elks (Kevin Sousa/CFL.ca)

After a combine that allowed the Syracuse linebacker to show off his versatility – he worked all over the field in drills, not just getting hemmed into that LB spot – Richards seems to be a perfect match for Edmonton. Jones is renowned for his creativity as a defensive coordinator and loves mixing things up schematically, dropping defensive linemen back and moving linebackers up into the action and creating general confusion and chaos for opposing quarterbacks.

On a media call this week after he’d moved up to the No. 3 spot in the CFL Scouting Bureau’s spring rankings, Richards was (unsurprisingly) very open to the idea of playing for the Elks.

“It would be an amazing thing to be part of just going first overall, especially to Edmonton,” Richards told reporters.

“It would be cool but at the same time it doesn’t change what I’m going to do once I get drafted. It doesn’t change how I prepare for things. I went into the combine preparing a way and I’ll go into camp preparing that same way. Whether I go first or 60th, to me it really doesn’t matter. I just want to be out there playing football.”

You can never go wrong with the o-line

There are seven offensive linemen that fall between No.’s 10 and 20 in the updated Scouting Bureau rankings. Let’s focus on two for now.

Noah Zerr measured in at six-foot-six and 305 pounds at last month’s CFL Combine presented by New Era and came out of the weekend as the top-ranked o-lineman in Scouting Bureau (No. 10). A first-team All-Canadian at left tackle with the Saskatchewan Huskies last year, Zerr has the size and the experience of a successful program behind him as he looks to make the leap to the CFL. He’s also got the genes, with his father, Rob Zerr, having played football at the U of S in the early 1980s and his mom, Patti, being a standout high school basketball player in her days.

The next o-lineman on the Scouting Bureau list is just a few stops away from Commonwealth Stadium on Edmonton’s LRT. Rodeem Brown walked into the CFL Combine as an unranked and somewhat undersized prospect. The six-foot, 280-pound guard from the University of Alberta showed why he was also a first-team All-Canadian o-lineman in 2021 when he more than held his own against opposing d-lineman in one-on-ones. When it’s lined up for them, the Elks have had no trouble looking to the U of A campus for some of coach Chris Morris’ talent. Could Brown be the next Golden Bear to don the Elks’ Green and Gold?

Why not add a Canadian to the QB mix? 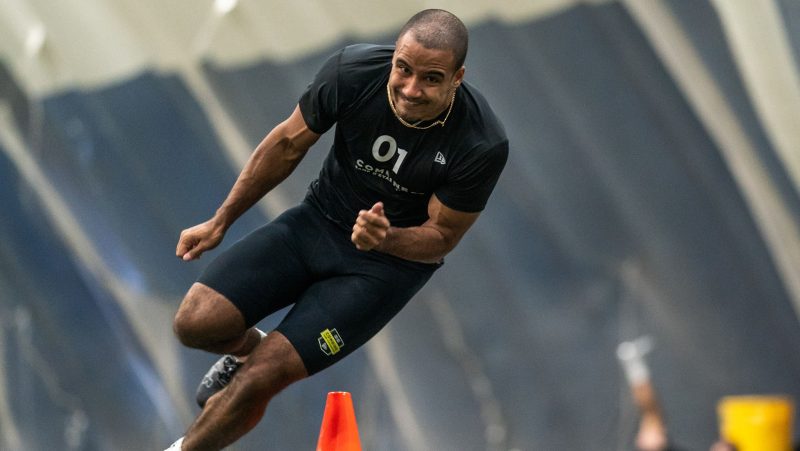 Waterloo’s Tre Ford climbed up to No. 4 on the final edition of the Scouting Bureau rankings this week (Thomas Skrlj/CFL.ca)

One of the first questions that Jones faced leading into the Combine in a media call last month was about what he wanted to do with his team’s quarterback spot. The Elks have seven QBs signed at the moment, with Nick Arbuckle the most experienced, though Jones hasn’t outright named the well-travelled former backup his starter.

It might be something of a big swing at first overall, but Tre Ford seems like an exceptionally talented quarterback with a lot of buzz around him. Last year’s Hec Crighton winner, Ford finished his four-year career at Waterloo with 64 touchdowns to 24 interceptions and rushed for more than 2,800 yards. He jumped from No. 6 to No. 4 in the updated Scouting Bureau rankings.

A 4.5-second 40 at the University of Buffalo pro day in March caught the eye of NFL scouts and his work at the CFL Combine later in the month – he posted a first-place 6.85-second 3-cone drill in Toronto – further showed off his athleticism.

If there’s an open audition for a place in the Elks’ QB stable this year, why not add one of the most highly-touted Canadian pivots we’ve ever seen into the mix?

“We have a trade”

Nothing generates draft day excitement more than those four words. On that pre-combine call in March, Jones was asked about the possibility of moving the first overall pick. He didn’t seem overly interested in it, but did say that he’d be open to offers.

“When you’re in our situation you always have your ears open and you have to have an open mind as to what’s going on,” Jones said.

“At the same time, we’ve created a list of guys that we know would make an immediate impact on our football team and allow us to kind of open the playbook, quite honestly, ratio-wise, that type of thing. With that being said, it would have to be something extremely attractive for us to do it. But again, you can never say never.”

Names worth thinking about

NCAA standouts John Metchie III and Jesse Luketa are talented enough to go first overall, but their possible NFL opportunities will likely push their names further down the CFL draft list on May 3.