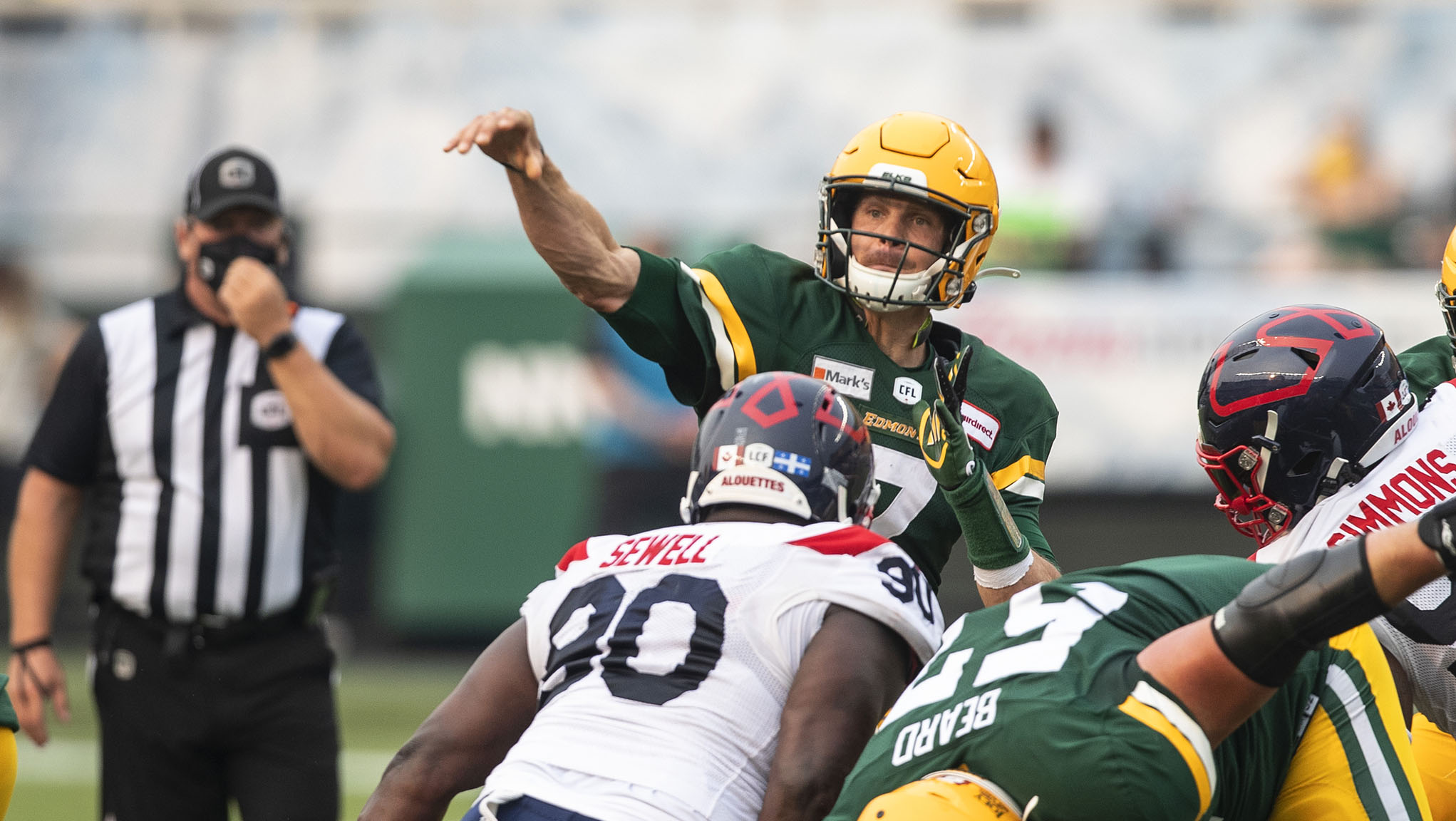 When his flight gets into Montreal and he gets settled in his new digs, before all of the learn-an-offence-in-fast-forward stuff happens, you’d think there might have be a quick meeting between Trevor Harris and his new/old teammate, Almondo Sewell.

It was back in Week 2 — that may feel like a lifetime ago now — that Sewell, getting used to wearing Alouettes colours, was getting ready to return to Edmonton to face Harris and the Elks. The veteran d-lineman had some very pointed words about his former QB.

Sewell could have seen an opportunity to get inside the head of a former teammate. Or maybe that kind of headline-grabbing statement is something that gets Sewell up for a game that he wanted to play well in. Whatever the case, upon news that Harris had been traded to the Alouettes on Sunday afternoon, Sewell quickly wanted to show support for his newest teammate.

That’s a Day 1 thing to resolve, if either player decides it needs resolution, but it’s just the tip of the iceberg when it comes to the impact that Sunday’s trade will have on the Als, the CFL’s East Division and the rest of this season.

THE ALS HAVE GONE ALL-IN

There’s no question that despite Vernon Adams Jr.‘s injury, the Alouettes looked at what they had and felt that they still have enough to take a run at the Grey Cup this year. Yes, Winnipeg is the cream of the three-down crop right now, but in the ideal scenario the Alouettes would only have to see them once in a game of consequence, on Dec. 12 in Hamilton for the Grey Cup game. The Als have the third-highest scoring offence in the league and a middle-of-the-pack defence in terms of points allowed. They have solid kicking from David Cote and when Mario Alford is healthy, a legitimate scoring threat in the return game.

Matthew Shiltz played well in his start on Saturday, steering the Als to a win to put them above .500 at 5-4. The expectation is that Shiltz will continue to start for now. Harris will have to get up to speed with the Als’ offence and if Shiltz plays well and the wins keep coming in, there may not be a rush to move him back into the backup spot. Montreal is in a good spot with five games left on the schedule. Adding Harris gives them experience at QB, with Shiltz limited on starts and Shea Patterson having just been signed in the last month.

THE ELKS ARE LOOKING TO THE FUTURE

Elks’ GM Brock Sunderland made it clear in his press conference on Sunday afternoon that the organization felt it wasn’t getting the production it needed with Harris on the field. Whether they get that or not with Taylor Cornelius at the helm for the rest of this season is up in the air, but the team is willing to take the rest of this season to see where he can take the team.

At 2-7, the Elks aren’t officially out of the playoff race yet but the clock is ticking. Cornelius, who impressed head coach Jaime Elizondo when the two were in the XFL together, will get a good, long look from the Elks over their next five games.

THE EAST JUST GOT EVEN MORE INTERESTING

We’ve been following an East Division that’s been more competitive than it has in a long time and Harris’ arrival in Montreal only adds to that mix. Toronto has some separation in first place, but the Als have a chance to match their record with a win against them on Friday. Hamilton is right behind both teams at 4-5. When Adams was injured, we wondered if it marked the start of an Alouettes’ free fall in the standings. Shiltz produced a win this past week and now with Harris on the roster and having shown that he’s capable of leading a team deep into the playoffs, there’s nothing set in stone yet in the East.

It was just over two years ago that the Bombers made their October move for Zach Collaros and there’s a similar feel to this Alouettes move. Collaros was in something of a different situation, having been weighed down by injuries and dealt twice in one year to a team that was closer to winning a title. Harris comes to Montreal with his level of play in question, with the team he was signed with through next season deciding he wasn’t their guy anymore. Both landed with their new teams with a lot to prove. Much in the same way that you couldn’t have predicted a trade like this happening at the start of the season, who would have thought two years ago when Collaros landed in Winnipeg that he’d still be there, having run up a 13-1 record since?