They’ll hope to be thorns in each others’ sides in 2021, but for a good hour in November, Scott Milanovich, Mike O’Shea and Orlondo Steinauer enjoyed spending some time together.

The trio of head coaches took part in a coaches call with national media as part of the Grey Cup Unite week. The first question they got was about what tied them all together.

Milanovich was the head coach of the Grey Cup-winning 2012 Toronto Argonauts. O’Shea was on staff as the Argos’ special teams coordinator and Steinauer was the defensive backs coach.

“They were holdovers from Jim Barker’s staff,” Milanovich remembered.

“I knew a little bit more about O’Sh as a coach because he had been the special teams coordinator and they had great success. We played him in the East Final a few years prior (when Milanovich was with the Alouettes). That’s when Chad Owens was really killing it just on special teams. So O’Sh was an easy one.”

He started to laugh remembering what it was like hiring Steinauer on.

“He had a pretty extensive interview. I gave (Argos’ defensive coordinator) Chris Jones a lot of latitude in the defensive staff hirings. We sat in there with O, for I mean, a long time,” the coach laughed again.

“(Steinauer) was so patient. (The interview) was all really about character, not even Xs and Os. Finally he was like, ‘Guys, all I can tell you is I’m a good guy, you can trust me and this is going to work.’

“They’re two of my favourite guys in the business, CFL, NFL, college football, whatever, they’re great coaches. I only had the one year with O and I think two, with O’Sh, but I had no doubt that they would go on to be highly successful.”

RELATED
» Steinberg’s MMQB: The free agency story so far
» O’Leary: Tim Bonner is ready for his chance with the Lions
» CFL reveals updated Negotiation List for each team 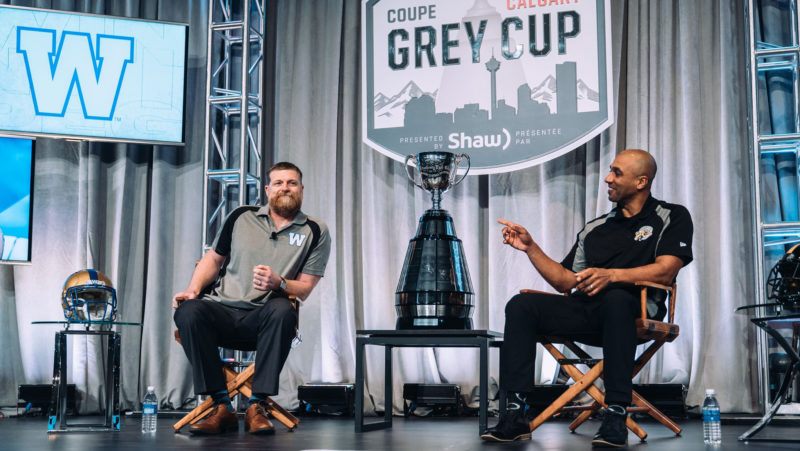 Seven years after being a part of Scott Milanovich’s Grey Cup-winning staff in Toronto, Mike O’Shea and Orlondo Steinauer met as rival head coaches at the Grey Cup in Calgary in 2019 (Johany Jutras/CFL.ca)

Over the last decade, Steinauer climbed the ranks from that DBs role to a defensive coordinator job with the Ticats, then spent a year at Fresno State as DC before returning to become the Ticats’ head coach in 2019.

“Scott really set the scene well for the interview process. I was fired up to get on the board,” Steinauer said.

“They had three people there reading body language. I remember just kind of slamming my hand down saying, ‘I get it! It’s got to be character first. You’re either going to have to try it or not,’ and thank goodness, he tried it. That was one to remember.

“I think that’s just something that carried over from my playing days. I wanted to not let the person next to me down. That staff…we went to work, we grinded. We went through I think a 1-5 stretch in the middle and you just thought we were 5-1, we still came to work. Nobody didn’t believe in each other.”

O’Shea stuck around as the Argos’ special teams coach through the 2013 season before taking his first head coaching job in Winnipeg, where he’s been since the 2014 season.

“The staff as a whole, you look back on it, it was such a good staff. Every day was an amazing learning opportunity for me. I thought we’d worked pretty damn hard and we also had a lot of fun doing it,” O’Shea said.

“I just happened to re-watch the replay of the hundredth (Grey Cup). Scott’s a no-BS guy. So when Larry Taylor pumps off a couple returns, the cut I’m getting on the sideline…it’s awesome. That kind of accountability was terrific. It certainly helped guide me in my process of becoming a head coach. I wouldn’t trade those years on that staff for anything. It was just awesome going to work every single day.”

That staff was one that was loaded with future head coaches. Milanovich mentioned Chris Jones as his defensive coordinator. He also had Jason Maas as his quarterbacks coach. Both would move on to be head coaches in Edmonton, with Maas taking the job after Jones left for an opportunity with Saskatchewan in 2016. Milanovich took the role in Edmonton for what would have been the 2020 season.

Steinauer and O’Shea met in last year’s Grey Cup, with Steinauer taking coach of the year honours and O’Shea getting to lift the championship after the Bombers beat the Ticats in Calgary.

“I hope I get to work with these guys at another time in my coaching career,” Steinauer said.